Difference between revisions of "Cryptococcus"

A Microbial Biorealm page on the genus Cryptococcus 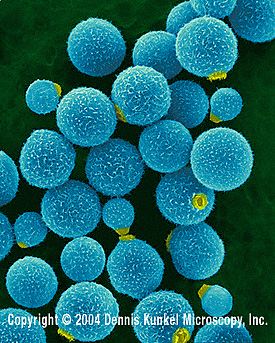 Cryptococcus is a genus of encapsulated yeast, only one species of which is pathogenic in humans. That species, Cryptococcus neoformans, is found in bird droppings, eucalyptus trees, and decaying wood. Cryptococcus causes cryptococcosis in humans, manifesting itself usually in the form of meningitis but more recently also as pulmonary disease. It is gaining prevalence as the most life-threatening pathogen found in patients with immunocompromised systems. These fungi possess a distinctive polysaccharide cap, visible under an India ink stain. The organism enters the host's body by way of the respiratory system. Some patients may be asymptomatic, while some may not demonstrate symptoms until years after initial inhalation of the fungus.

Currently there are several organizations working toward the complete sequencing of Cryptococcus neoformans' genome. Several of the chromosomes have already been mapped; the completion of the genome sequence will provide researchers with a better understanding of the fungus's history and complex characteristics. See NCBI's Genome Database for completed chromosome sequences.

The cells of Cryptococcus are round or oval-shaped, with a polysaccharide cap. Reproduction occurs both asexually in the form of budding or sexually (see diagram). Sexual reproduction occurs when two haploid Cryptococcus cells fuse, producing thread-like extensions called hyphae. At the end of the hypha a structure called the basidium, a spore-producing, club-shaped structure. The basidium produces spores when the two haploid nuclei inside the structure fuse to produce one diploid nucelus. Spores result from meiosis and mitotic divisions, which are then released and enter the host through the respiratory system. When the spores are inhaled, normally the immune system halts reproduction; when the immune system is not functioning properly, the spores are allowed to replicate and take over, causing many of the clinical symptoms associated with cryptococcosis. Most strains of Cryptococcus utilize creatinine as a nitrogen source.

Cryptococcus is a fungus which is found worldwide, primarily in bird guano or around eucalyptus trees. There are no known instances of animal-to-human transmission or human-to-human transmission, except in the case of whole-organ transplants, which may cause the organ recipient to become infected. Healthy individuals who are exposed to the spores from bird droppings or in laboratories may be at higher risk of infection. AIDS patients and others who suffer from weak immune systems are especially at risk, as they are unable to protect the body against the invasion of the spores.