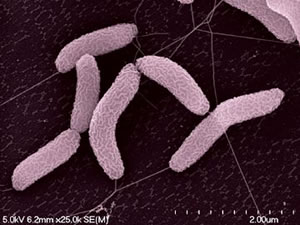 FIG. 1.Scanning electron microscopy image of Desulfovibrio desulfuricans ND132 showing a rod shape of variable length that has a tendency to curve.From Gilbert , (2004). 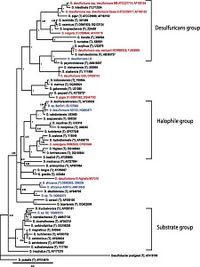 D. desulfuricans strain ND 132 is an anaerobic dissimilatory sulfate-reducing bacterium. This strain ND132 can be isolated from estuarine sediment and anoxic saltmarsh sediment (Compeau and Bartha, 1985). Due to high production of methylmercury that occurs during the sulfate reduction, the production of mercury is linked to Hg-specific uptake pathway and biochemistry of Hg binding which depends on enzyme methyltransferase (Gilmour et. al., 2011). File:Cell structure and metabolism.jpegFIG. 4. Influence of substrates, electron acceptors, and medium reductants on growth and methylmercury production by D. desulfuricans ND132. Data were collected at the end of batch growth on 40 mM substrates. Left panels show growth with a range of electron donors and acceptors, all reduced with 100 μM Ti-NTA; “S” represents sulfate (40 mM). Right panels show growth on sulfate-lactate (S-lac), sulfate-pyruvate (S-pyr), sulfate-formate-aceate (Sfor-ace), pyruvate (pyr), fumarate (fum), fumarate-pyruvate (fum-pyr), or fumarate-formate (fum-for) medium with Ti-NTA, thioglycolate-ascorbate ([Thio/asc]), or cysteine ([cys]) as the medium reductant. (all added to give 100 μM). Error bars represent the standard deviations of results from three replicate growth tubes, with levels for blanks (no bacteria control) subtracted where appropriate.  From Gilmour et. al., (2011). ]]