Difference between revisions of "Diplomonada"

A group of diplomonads has been found to use a genetic code in which TAA and TAG encode glutamine rather than termination. 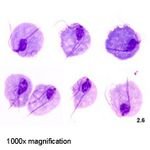 Diplomonads have two haploid nuclei (each with four associated flagella, arranged symmetrically about the body's main axis) that give the cells a face-like appearance.

Diplomonads do not possess mitochondria, and thus they cannot perform respiration and instead must obtain their energy from fermentative processes. Diplomonads are able to ferment sugars such as glucose to produce energy, and they are also capable of fermenting the amino acid arginine as a means of obtaining energy.

The diplomonads also lack peroxisomes and lysosomes. Lysosomes are membrane-enclosed sacs that hold digestive enzymes used in the digestion of macromolecules such as fats, polysaccharides and proteins. The lack of these enzymes might cause an indirect effect on the production of cellular components. The lack of peroxisomes might have a similar impact. Peroxisomes produce hydrogen peroxide from the reduction of oxygen gas, and also synthesize bile salts that absorb and digest fats. Once again, the lack of these bile salts to digest fats may affect the production of such macromolecules. The diplomonads have a relative simple cytoskeleton that is composed of a crossing of microtubules. This cytoskeleton is the structural component of the organism. 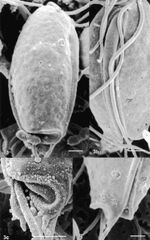 Some diplomonads are free-living and may be common in stagnant fresh water, but most are commensal in the intestines of animals. Some are parasitic and cause disease; in humans, the diplomonad Giardia infects the intestine and can cause diarrhea (a disease known as giardiasis, or "hiker's diarrhea"). Hexamita 50330 is a known parasite in salmon. Diplomonads are very diverse, including a wide variety of other pathogens and several free-living forms. Here are some diplomonads found in fish.