Difference between revisions of "Enterobacter"

A Microbial Biorealm page on the Enterobacter

Enterobacterbacteria are nosocomial opportunistic pathogens that are causing more infections including up to 5% of hospital-acquired septicemias, 5% of nosocomial pneumonias, 4% of nosocomial urinary tract infections, and 10% of postsurgical peritonitis cases (list from Hoffmann and Roggenkamp 2003). These bacteria also have some usefulness to humans, however; for example, Enterobacter cloacae is used in biological control of plant diseases (Anaesthetist).

No Enterobacter bacterial genomes have been sequenced; however, several of the genes have been studied through mutants and other such means. For example, a mutation in pfkA in Enterobacter cloacae caused a change from what was rapid growth on certain carbohydrates as detected in seed exudates to considerably slower growth on other carbohydrates, amino acids, and organic acids (Roberts et al. 1999)

Enterobacter bacteria are motile, rod-shaped cells, some of which are encapsulated. They also possess peritrichous flagella. As facultative anaerobes, some Enterobacter bacteria ferment both glucose and lactose as a carbon source. Gas is produced from the metabolic processes, but they do not produce hydrogen sulfide. Enterobacter cloacae A-11 and other closely related bacteria are prototrophic, glycolytic strain of Enterobacter that are found on a number of different seeds and plants. 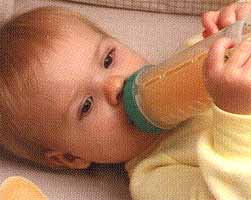 A picture of a baby with a bottle. Before baby formula was routinely screened for Enterobacter, many infants contracted bacterial infections due to this Enterobacter's ability to survive the heating prepartions of the powered formula. From Jason S. Kasarsky.

Some symptoms of Enterobacter infections include bacteremia, lower respiratory tract infections, skin infections, soft tissue infections, urinary tract infections, UTI, endocarditis, intraabdominal infections, septic arthritis, osteomyelitis, and ophthalmic infections. They are an opportunistic pathogens that rarely cause disease in otherwise healthy individuals. This bacterium's virulence seems to be due largely to an endotoxin that it produces. Nosocomial infections are the most frequent type of Enterobacter infections, but community-acquired infections are sometimes observed. The bacteria usually infects people who stay in the hospital, especially on the ICU, for long periods of time as well as people how have used many antimicrobial agents, have serious underlying conditions (eg: diabetes, malignancies, burns, mechanical ventilation, etc.), use foreign devices such as intravenous catheters, and immunosuppression.These infections can be contracted endogenously via colonization of the skin, gastrointestinal tract, or urinary tract or exogenously from the "ubiquitous nature of these bacteria" (Sinave). In many cases, the hands of personnel, intravenous solutions, endoscopes, blood products, devices for monitoring intra-arterial pressure, and stethoscopes have been deemed the source for the infection. (Sinave) One specific species of this bacteria, Enterobacter sakazakii, is well-known for causing infections in infants who were fed milk-based powered infant formulas. The bacteria, which was called a "yellow pigmented Enterobacter cloacae" until 1980, survives when the contaminated powered formula is heated and prepared. Since it has caused several outbreaks of infection in the past, baby formulas are now effectively screened for E. sakazakii before they are sold. The infections caused in infants are neonatal meningitis, sepsis, and necrotizing enterocolitis; the reported case-fatality rate varies from 40-80% among infants who contract this bacterial infection (Health Canada).