A Microbial Biorealm page on the Enterococcus 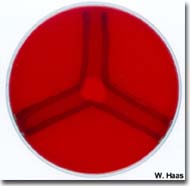 Enterococcus cultured on agar. From the University of Oklahoma.

Enterococci are regular inhabitants of the bowel. The genome of E. faecalis is more than 25% exogenously acquired DNA. Enterococci are the leading cause of hospital-acquired secondary infections.

The genome of Enterococcus faecalis V583 was recently sequenced. The main chromosome is 3,218,031 bp long with 3,182 open-reading frames, and the three plasmids are 66,320 bp long, 57,660 bp long, and 17963 bp long, with 72, 64, and 19 open-reading frames respectively. The G+C content of the main chromosome is 37.5% and around 34% for the three plasmids. The genome will provide insight into the mechanisms of pathogenicity and the evolution of the genome and how it has acquired or developed vancomycin resistant strains. As regards virulence factors, researchers have discovered a pathogenicity island on the genome of E. faecalis. This region contains about 150 kbp long with a lower G+C content than the rest of the genome and encodes genes that aid the bacteria in host infection, including genes for a toxin that punctures cell walls and genes for molecules that help E. faecalis adhere to surfaces. It is also believed that many of the genes on the E. faecalis genome have been acquired through lateral gene transfer, both within the species and the genus, but also with other genera, specifically Streptococcus and Staphylococcus.

The genome of E. faecalis DO is 2,848,380 base pairs long with a 37% G+C content. This obvious inclination to acquire mobile gene elements has certainly contributed to the rapid acquisition and dissemination of drug resistance of the Enterococci. There is also evidence that Enterococci act as a reservoir of drug resistance for other genera, especially as concerns vancomycin resistance.

Vancomycin is currently the strongest antibiotic in our arsenal, used as a last resort to treat bacterial infections that respond to no other antibiotics. Unfortunately several species of bacteria, including Enterococcus faecalis have developed resistance to our last line of defense. Vancomycin resistance in E. faecalis is encoded on a mobile element of DNA in the genome. The gene encodes vancomycin resistance via synthesis of modified peptidoglycan precursors that terminate in D-lactate.

Enterococci are Gram-posistive cocci that occur singly, in pairs, or in short chains. They are facultative anaerobes. They have a fermentative metabolism in which they convert carbohydrates to lactic acid. They are usually considered strict fermenters because they lack a Kreb's cycle respiratory chain. Analysis of the E. faecalis genome highlights the importance of the fermentation of nonabsorbed sugars in the gastrointestinal tract. E. faecalis has a large number of sugar uptake systems, comparable to Listeria species and considerably more than any other sequenced bacteria. E. faecalis also produces a large amount of extracellular oxygen, one of the few bacteria that does so. E. faecalis also has cation homeostasis mechanisms, which likely contributes to its resistance to pH, salt, metal, and desiccation. Enterococci are usually catalase negative, although sometimes tests can come back slightly positive. They used to be classified as Group D streptococci due to the fact that they have the Lancefield Group D antigen (glycerol teichoic acid antigen) in their cell walls.

Enterococci have been described as extremely hardy organisms capable of living in many mediums that would certainly kill other bacteria. They normally inhabit the bowels of animlas, humans included, but they are found in soil, vegetation, and surface water, probably due to contamination by animal excrement. Enterococci are capable of growing at a range of temperatures from 10-45 degrees Celsius, and can grow in hypotonic, hypertonic, acidic, or alkaline environments. As facultative anaerobes, enterococci can grow under reduced or oxygenated conditions. They are also capable of survival at 60 degrees Celsius for 30 minutes. Enterocoocus faecalis is able to grow in 6.5% NaCl. Enterococci can also grow in 40% bile salts and over a broad range of pH. Enterococci also have a large amount of natural antibiotic resistance. 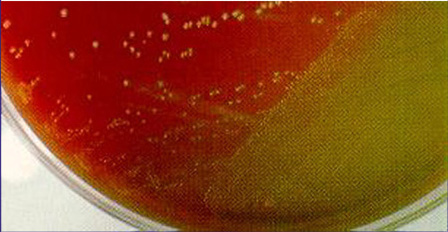 Enterococcus faecalis on a blood agar plate. From the University of Missouri at Columbia.

Enterococci can be isolated using any blood agar base containing 5% They can be isolated from Gram-negative bacteria in a sample using bile-esculin azide, phenylethyl alcohol agar, Columbia colistin-nalidixic acid agar, or other media containing azide. Standard laboratory growing conditions for enterococci is a brain heart infusion, or Todd-Hewitt, broth or agar, supplemented with antibiotics when appropriate, at 35-37 degrees Celsius without aeration.

Enterococci are the leading cause of nosocomial infection (or secondary infection aquired while in a hospital). They are responsible for approximately 110,000 cases of urinary tract infection, 25,000 cases of bacteremia, 40,000 wound infections, and 1,100 cases of endocarditis yearly in the United States. To infect hosts enterococci primarily colonize mucosal surfaces. They also must evade host defenses although little is known about the actual mechanism of evasion. The pathogenicity of the organism is believed to be closely associated with its ability to produce cytolysin, a toxin that causes rupture of a variety of target membranes, including bacterial cells, erythrocytes, and other mammalian cells.

Huycke, Mark M. et al. 1998. Multiple-Drug Resistant Enterococci: The nature of the problem and an agenda for the future. Emerging Infectious Diseases, 4: 239-249.