Difference between revisions of "Epulopiscium"

A Microbial Biorealm page on the Epulopiscium 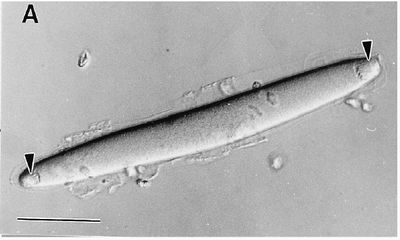 Epulopiscium fishelsoniis larger than any other eubacterium and has a complex daily life cycle. This big bacterium, which has only been found in the gut of surgeonfish, is 10- to 20-fold longer than any other bacterium and more than 2,000-fold larger in volume. Cell division of these unique bacteria involve the formation of daughter cells totally within the parent cell which later emerge as mobile cells.

When Epulpoiscium fishelsoni was first found, it was placed in the Protoctista kingdom based on its size, length, volume, daily cycle, method of reproduction, and nucleoid and cytoplasm structure. However, the isolation and sequencing of the gene encoding the 16S rRNA subunit shows that E. fishelsoni is actually related to the low G-C Gram-positive bacteria Clostridium. 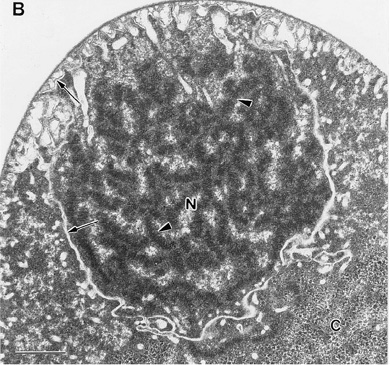 Electron micrograph of a compact nucleoid in an E. fishelsoni cell - the DNA is condensed in a chromosome-like fashion and is separated from the outer cytoplasm. From Bresler et al.

Epulopiscium fishelsoni has a unique intracellular structure and mode of reproduction and as an abnormally large cell size. The reason behind the large size of Epulopiscium fishelsoni is unknown - in fact, Epulopiscium has been called "most enigmatic group of gigantobacteria" (Shulz and Jorgensen 2001). Some think that the large size might correlate with its unique method of reproduction and/or give it a selective advantage against protozoan predation. The large size of Epulopiscium baffles people because it seems to break the known rules of diffusion limitation and size. However, Koch calculated with known equations dealing with diffusion limitation and cell size and found that theoretically (according to our known model), the cells could reach a 410 micrometer diameter before diffusion limitation if an extremely high substrate concentration occurred (he used 0.1% glucose as the substrate concentration) (Shulz and Jorgensen 2001). Still, the actual substrate concentration the gut of surgeonfish is not known.

Even though Epulopiscium is not a Protista, they contain an unusual cortex which seems to be made of vesicles, capsules, and tubules, all of which are structures generally found in protists rather than bacteria. Some suggest that the vesicles play a part in excreting waste products - this, as well as an intracellular system of transport organelles, might be what allows Epulopiscium to overcome the constraints of diffusion limitation with a large cell size (Shulz and Jorgensen 2001). 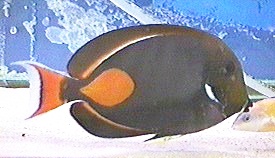 Epulopiscium fishelsoni was first found in the gut of the brown surgeonfish Acanthurus nigrofuscus in the Red Sea in 1985. Since then, similar organisms have been found in surgeonfish in the Hawaiian Islands, French Polynesia, Tuvalu, Guam, southern Japan, Papua New Guinea, the Great Barrier Reef, and South Africa (Bresler et al. 1998). Due to the daily cycle of the E. fishelsoni, it affects the pH of the surgeonfish's gut fluids differently during the day and night which suggests that cyclic metabolic changes occur within the bacterium. 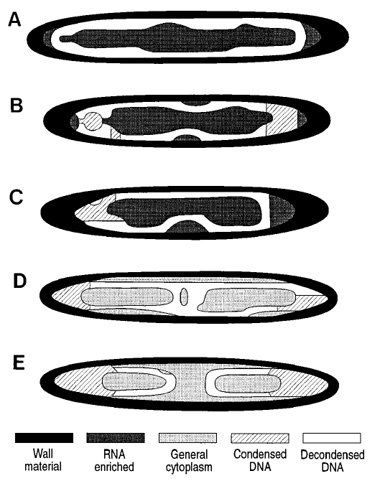 This daily life cycle of Epulopiscium fishelsoni correlates well with the daily activities of the surgeonfish. In the mornings, E. fishelsoni cells (isolated from a surgeonfish gut, not a culture) were found to contain compact, spherical nucleoids at the apices of the cells which elongated during the day. Throughout the day, the average length of the cells increased with the nucleoids making up a large percentage of the parent cell volume. In the late afternoons and evenings, these nucleoids reached a maximum of approximately 50 - 75% of the length of the parent cells. During the night, over 70% of the E. fishelsoni cells found in the gut contained two nucleoids; the rest of the cells were smaller and lacked incipient daughter cells. These smaller cells, which were almost always found only in early morning samples, were assumed to be the released daughter cells; the parent cells are destroyed in the process of releasing daughter cells. Because of this daily process it is almost impossible to grow them in a culture.

During the day when the nucleoids are elongating and the bacteria are reaching their full size, the surgeonfish would be at its most active feeding frequently and filling its gut with algal food materials. In addition, the metabolism of the E. fishelsoni at this time suppress the pH of the gut fluids. During the night when the fish would be inactive in reef shelters, the modal cell size declines and the bacteria does not suppress the pH (Bresler et. al 1998).

It is not known if the abnormally large size of Epulopiscium fishelsoni has anything to do with its unique reproduction in which one to seven daughter cells form inside of the parent cell. These cells grow along the body of the parent cell until they fill the cell and finally burst the cell wall. Metabacterium polyspora is phylogenetically related to E. fishelsoni and is thought by some to point towards the evolution of the special reproductive system of Epulopiscium. M. polyspora live in the intestines of rodents, grow to an unusual size (not as large as Epulopiscium, but unusual nonetheless), and reproduce by forming two or more refractile endospores per cell (Shulz and Jorgensen 2001).