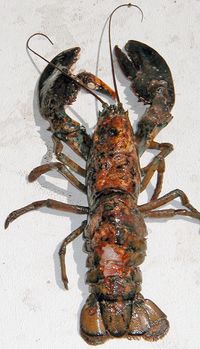 Gadus morhua and it's gut microbiome is affected by more than just climate change and fishing in the wild. Current research by Bagi et al.[9] have shown the negative impacts of crude oil spills. After starving Gadus morhua specimen for 7 days, Bagi et al. introduced varying levels of petroleum oil into their environment (between 0 and 0.1 mg/L) and measured the genome of the specimens’ microbiomes after 28 days of exposure. They found that exposure to medium or high concentrations of petroleum oil (0.05 mg/L to >0.1 mg/L) caused the population of microbial organisms in the gut microbiome of Gadus morhua to decrease, except in the case of Deferribacteres. Deferribacteres comes from an acetoclastic iron-reducing phylum, and previous studies have shown exposure to oil results in a decrease in iron-binding by the host organism making the mineral even more available to the microbe. While Deferribacteres had a higher concentration, the concentration of Fusobacteriales, Clostridiales and Alteromonadales significantly decreased in medium and high exposure samples. The oil contained all of the EPA’s polycyclic aromatic hydrocarbons (PAHs), which are confirmed carcinogens that the liver and gut microbes can transform into conjugated metabolites (a process that makes them even more harmful). If more of this pollution continues, it is likely the diversity of microbes in the gut of Gadus morhua will decrease, which has the potential to limit its fitness. Even though oil drilling is not common in the region, and lobstermen as well as environmentalists indicate that climate change isn’t the only force threatening the health of this species in the Gulf of Maine.