Adapting to the aquatics lifestyle required changes to the internal body and function of the the Delphinus. Being that dolphins live in the water, there is a much higher need of kidney function. The amount of water that flows through and around the dolphin is significantly more than the terrestrial mammals. The genes SMAD1, NPNT, LEF1, SERPINF1, and AQP2 are critical for the modifications of the kidney.[6] These genes allow for the dolphins to have a reniculate kidney. Reniculate kidneys are found in aquatic mammals. They allow for a large surface area for removing toxins from the body more efficiently. Aquatic mammals such as Delphinus, don’t have specialized glands for excreting salts from the body as terrestrial mammals do - sweating. With the reniculate kidney dolphins are able to gain water from seawater without any harm.[7][8]

The heart of a dolphin is approximately 33 times larger than that of a cow, a terrestrial mammal. Specific genes were adapted to allow for the diving motion required for the aquatic lifestyle. Genes ADAM9, NKX2, CAD15, CRFR2, GDF9, CADH3, TAB2, and PLN are the specific genes that generated the adjustments need for the new environment. All eight of these genes allowed for anastomoses, or cross-connection, between the dorsal and ventral inter ventricular arteries. The anastomoses allows for the Delphinus to either conserve or dissipate body heat.[9] Another adaptation that the genes contribute to is hypertrophy, an increased growth of muscle cells, of the right ventricle.[10][11]

Living below the surface of water requires an adaptation to the lungs due to the lack of oxygen in the environment. Delphinus, along with other Cetacea, breath through their lungs, not gills as many other aquatic mammals do. Among all the organisms in the world, the Cetacean has the most modified lung. Increased cartilage support, reinforcement of peripheral airways, loss of respiratory bronchioles, and presence of bronchial sphincters are all adaptions from the genes RSPO2, LEF1, and FOXP2. Many of these adaptions are in response to the new diving motion from living in the aquatics.[12] In order to breath in oxygen, dolphins use their “nostrils” that are located at the top of their body, also known as a blowhole. The bronchiole sphincters make it possible for the dolphin to seal off the water from entering the lungs and hold in oxygen for extensive amounts of time.[13] 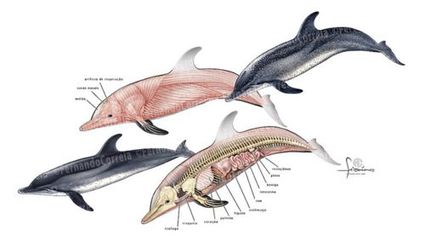 The external features of the Delphinus have also adapted to living in the marine environment. Homeotic development involves genes that regulate the anatomic structure of organisms. The 5’HoxD genes, homeotic genes, are three times higher in Cetaceans than in terrestrial animals when comparing the ratio of non-synonymous to synonymous substitutions.[14] The significant increase in 5’HoxD genes is suggested to be correlated with the change in body structure.

Light travels differently when submerged in water, which leads to a necessary adaptation to the eyes. In dolphins, the POU4F2, NES, and FOXP2 genes help with sight under and above water.[15] The adapted corneas and lenses are shaped to be able to see light through water. With the changed genes, the dolphin’s ocular muscles are able to bend to see aerial vision as well as underwater vision.[16] Dolphins have good night vision due to the tapetum lucidum, which is attached to the retina. The tapetum lucidum reflects on the lens to allow for better night vision. Other morphological changes to the dolphin eye are to the optics, retina, and possible different other eye structures.[17]

Being that the Delphinus was once a terrestrial, land walking Pakicetus, Delphinuses have vestigial hind limbs found in the body all of Cetaceans.[18] The genes RSPO2 and PTCH1 contributed to the progressive reduction and loss of the hindlimb and development of tail flukes.[19][20] There was gradual dissociation of the pelvic girdle from the vertebral column as the hind limbs became less useful to the dolphins.

Unlike most terrestrial mammals, the aquatic Delphinus does not need hair. Gene TGM3 is responsible for the adapted hairless dolphin. This lack of hair increase the hydrodynamic and subaquatic movements.[21]

After approximately 50 million years, the Delphinus evolved from the terrestrial Pakicetus to the modern aquatic dolphin.[22] Throughout these millions of years, it is believed the there were no mutations that contributed to the development of the modern dolphin. Scientist believe the various adaptions were due to simply natural selection and genetic drift. In order to understand how positive selection plays a role in the natural selection, there would need to be an understanding of speciation and the nature of adaption.[23] Research is currently being preformed to find further answers to the unknowns of dolphin evolution and evolution as a whole.