Difference between revisions of "Filoviridae"

A Viral Biorealm page on the family Filoviridae 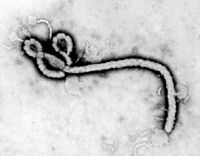 The name "filoviridae" comes from the latin filo, meaning "threadlike." Not much is known about filoviruses, since their highly pathogenic nature makes them difficult to study. Filoviruses are classified as biosafety level 4 by the CDC, meaning they are some of the deadliest viruses known. Filoviruses cause hemorrhagic fever, which includes massive internal and (sometimes) external bleeding among its symptoms. The filovirus family has strong genetic and structural similarities to rhabdoviruses and paramyxoviruses.

The first outbreak of marburgvirus was in 1967 in Germany and Yugoslavia. Laboratory workers in those countries developed hemorrhagic fever after handling tissue specimens from green monkeys imported from Africa. Thirty-one people were infected in these outbreaks, with seven deaths. The virus was named after the German town of Marburg, where the first German outbreak occurred.

The first outbreak of Ebola virus happened almost ten years later. In 1976, two outbreaks of a then-unrecognized hemorrhagic fever occurred in northern Zaire (now the Democratic Republic of Congo) and southern Sudan. These outbreaks were much worse than the Marburg virus outbreak in 1967, resulting in 500 diagnosed cases and 460 deaths - a 92% fatality rate, compared to the Marburg virus' 23% fatality rate. Two different species of Ebola virus were found to be involved in this outbreak, and were named for the two countries where the outbreak took place. The fatality rates differ between these two species as well. Sudan ebolavirus had a 50% fatality rate, and Zaire ebolavirus had a 90% fatality rate. Several outbreaks of Ebola virus have occurred in Africa since the first outbreak, ranging from small outbreaks in Gabon between 1994 and 1996 to large epidemics in Zaire in 1995 and Uganda in 2000. The Ebola virus is named after a river in Zaire.

There is no treatment for filoviruses. Supportive therapy- keeping the patient's fluid and electrolyte levels balanced, maintaining blood pressure and oxygen status, and treating any complicating infections- is given for symptoms. With Ebola, it is not known why some people are able to recover while others do not, but it is known that patients who die have not developed a significant immune response to the virus by the time they died. Currently, a vaccine for Marburg virus is showing promise in monkeys, and may prove useful in humans. (sources: Beer, Wikipedia, and the CDC)

The filovirus genome is non-segmented and contains a molecule of linear, negative-sense, single-stranded RNA. The genome is 18900-19000 nucleotides long. The 5'-end of the negative-sense strand does not have a covalently attached terminal protein, nor does it have a cap. Nucleotide sequences at the 3'-terminus are complementary to similar regions on the 5' terminus. (source: ICTVdB)

Virion Structure of a Filovirus

Filovirus virions are pleomorphic, meaning they exhibit many different forms, due to their flexibility. Virions are enveloped and consist of a nucleocapsid, a polymerase complex, and a matrix protein. Virions are 80 nm in diameter, and 130-1400 nm long. The nucleocapsid has helical symmetry. The virions can be straight but are often seen curved or hooked (e.g., a "U" or a "6" shape). Virions can also have branches. Surface projections are knob-shaped peplomers which are spaced widely apart and cover the surface of the virion evenly. (source: ICTVdB)

Reproductive Cycle of a Filovirus in a Host Cell

Filovirus virions attach to a host cell and are endocytosed into vesicles in the host cell. The nucleocapsid is released into the cytoplasm when the virus membrane fuses with the vesicle membrane. Using the host cell's mechanisms, translation of the viral RNA occurs. Translation is switched over to replication when viral protein levels rise. The negative-sense RNA is used as a template to create a complimentary positive-sense strand of RNA, which is then used to synthesize negative-sense RNA for encapsidation. The newly-formed nucleocapsids bud from the host cell wall, becoming enveloped, and are released into the host organism. (source: Viral Bioinformatics Resource Center)

The natural reservoir (or reservoirs) for filoviruses are unknown. What is known is that filoviruses are transmitted to humans from animals other than humans. The virus can be replicated in fruit and insectivorous bats which are native to the area where filoviruses are found without the bats becoming ill, so they may prove to be the virus carriers. It is unknown how transmission occurs from the natural reservoir to humans. Once a human has become infected, transmission occurs through contact with an infected person or their bodily fluids. Nosocomial transmission, or transmission in a health care setting such as a hospital, is especially prevalent. Health care providers are also at high risk for becoming infected with a filovirus, as they come into close contact with infected individuals. Airborne transmission between humans has not been seen, though Reston ebolavirus was transmitted via airborne vector between monkeys at the Hazleton Primate Quarantine Facility in Reston, Virginia.

Marburg virus has an incubation period of 5-10 days, while Ebola virus has an incubation period of 2-21 days. Symptoms of both viruses include a high fever, body aches, sore throat, and fatigue, followed by development of a maculopapular rash, vomiting, diarrhea, and stomach pain. Some patients have internal and external bleeding. The cause of death is normally organ failure or shock associated with fluid and blood loss. (sources CDC)