A Microbial Biorealm page on the genus Flavobacterium 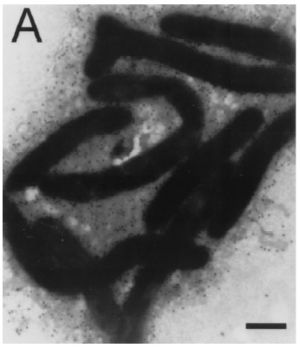 Flavobacteria are a group of commensal bacteria and opportunistic pathogens. Flavobacterium psychrophilum causes the septicemic diseases rainbow trout fry syndrome and bacterial cold water disease. According to Bernardet et al Flavobacteria are gram-negative aerobic rods, 2-5 mm long, 0.3-0.5 mm wide, with rounded or tapered ends that are motile by gliding, yellow (cream to orange) colonies on agar, decompose several polysaccharides but not cellulose, G+C contents of 32 - 37 %, and are widely distributed in soil and freshwater habitats. The type species is F. aquatile.

Currently there are no complete genome sequences but two are projects are in the works. One for Flavobacterium sp. MED217, and the other for Flavobacterium psychrophilum. However, studies using mutants have been conducted to better understand the genetic system behing Flavobacterium johnsoniae's gliding motility mechanism. Six genes, gldA, gldB, gldD, gldF, gldG, and ftsX, were found to be required for proper gliding ability. GldH mutants lacked certain cell movements and formed nonspreading colonies.

Flavobacterium johnsoniae use a rapid gliding motility that is controlled by an unknown mechanism. Individual cells can glide at speeds up to 10 micrometers per sec. These cells also "absorb latex spheres and propel these rapidly around the cell in multiple paths" (McBride et al. 2003).

Flavobacteria are generally commensal bacteria that live in soil and water and are opportunistic pathogens. The can be found in water and soil in many areas around the world. 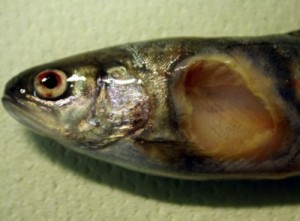 Rainbow trout infected by by Flavobacterium psychrophilum. From The Laboratory of Aquatic Pathobiology.

Flavobacterium psychrophilum causes a severe disease in fish, especially in farmed rainbow trout (Oncorhynchus mykiss) all over the world. It can be transmitted horizontally indirectly through the water column and directly by fish-to-fish contact. Over the past ten years in many parts in Europe, rainbow trout fry syndrome and bacterial cold-water disease caused by F. psychrophilum have become the most serious bacterial fish diseases. Although these disease can be treated with antimicrobail drugs or chemical bath treatments, these are not generally used in the environment due to the harmful and large impact that they would have on the ecosystem. Currently, researchers are trying to produce a vaccine against F. psychromphilum that would not have such a harmful and powerful impact on the environment. There is however a new way to detect the disease through a process of polymerase chain reaction for Flavobacterium psychromphilum based on the 16S-23S rDNA intergenic spacer region. It has shown to be very successful.