A Microbial Biorealm page on the genus Frankia 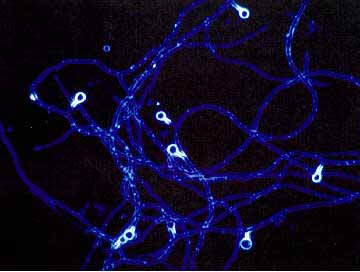 Frankia is a nitrogen-fixing bacterium that lives in the soil and has a symbiotic relationship with many plants.

"The actinomycete Frankia is of fundamental and ecological interests for several reasons including its wide distribution, its ability to fix nitrogen, differentiate into sporangium and vesicles (specialized cell for nitrogen-fixation), and to nodulate plants from about 24 genera." [1]

Species of the Frankia Genus are Gram positive bacteria.Frankia sp. are filamentous nitrogen-fixing bacterium that grow by branching and tip extension and thus resemble the antibiotic-producing Streptomyces sp. . They live in the soil and have a symbiotic relationship with certain woody angiosperms, called actinorhizal plants. During growth, the Frankia sp. produce three cell types: sporangiospores, hyphae, and diazo-vesicles (spherical, thick walled, lipid-enveloped cellular structures). The diazo-vesicles are responsible for the supplying of sufficient Nitrogen to the host plant during symbiosis. Frankia supplies most or all of the host plant nitrogen needs without added nitrogen and thus can establish a nitrogen-fixing symbiosis with host plants where nitrogen is the limiting factor in the growth of the host. Therefore, actinorhizal plants colonize and often prosper in soils that are low in combined nitrogen. Symbiosis of this kind adds a large proportion of new nitrogen to several ecosystems such as temperate forests, dry chaparral, sand dunes, mine wastes, & etc[3].

The Frankia alni ACN14a was first isolated in Tadoussac, Canada from a green alder (Alnus crispa). Except for Australia and Antarctica, Frankia alni can be isolated from soils on all continents. Frankia alni causes root hair deformation in a way that it enters the cortical cells and induces the nodule formations, which look like those induced by Rhizobium in legumes. Then, the nodules are colonized by vegetative hyphae (mycelium filaments) that differentiate into diazo-vesicles. Reductive nitrogen fixation takes place in the diazo-vesicles and this process is protected from molecular oxygen by many layers of tightly stacked hopanoid lipids.

The genome sequencing project of Frankia alni ACN14a was done at the Genoscope sequencing center and was completed on 03/08/2006. The genome of Frankia alni ACN14a contains a circular chromosome that is 7,497,934 necleotides long. It also cantains plasmids, but the amount was not clear based on my research. It has a high G-C content of 72.8% and contains 88% coding regions. The genome has 6,786 genes, comprising of 6,711 protein coding genes, 63 structural RNAs, and 12 pseudo genes.[3]

Genoscope, the CNRS, and University of Lyon began in October of 2003 on a Frankia squencing project. They are sequencing the Frankia alni ACN14a genome and compare it to other Actinobacteria. Their goal is to gain more knowledge on the mechanisms behind Frankia's symbiotic relationships. Currently there are three projects taking place at the DOE Joint Genome Institute, two are in the draft assembly stage and one is in progress. Frankia sp. Mbj2, Frankia sp. EAN1pec, Frankia sp. CcI3 are the three species (click on links to view infromation through NCBI). 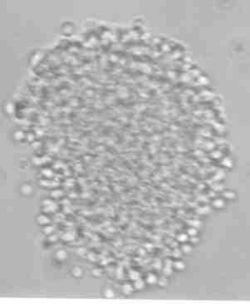 Frankia are Gram-positive, aerobic, nitrogen-fixing bacteria. The membranes of Frankia, as well as the membranes of some other bacteria like Bradyrhizobium, Rhizobium, and Streptomyces, contain lipid components called hopanoids. Hopanoids, which are amphiphilic, pentacylic triterpenoid lipids, condense membrane lipids therefore stabilizing the membranes in a similar way to which sterols do in higher organisms. There are many structural variants of hopanoids like polyol- and glyco-derivatives that can be found within various bacteria; the specific functions of each hopanoid derivative have not been found. Some people hypothesize that hopanoids may have more refined functions than just membrane stabilizing. In Frankia specifically, membranes containing hopanoids surround vesicles called diazovesicles that contain nitrogenase, an oxygen-sensitive enzyme. While hopaniods thicken and stabilize the walls which help to keep oxygen away from the nitrogenase, some suggest that the hopanoids themselves play a more specific and molecular role in the oxygen protection mechanism of nitrogenase.

Frankia (both Frankia that lives in a symbiotic relationship with plants and free-living Frankia strains) secrete extracellular proteins that might be involved in processes like bacteriolysis, hydrolysis, and virulence. Some Frankia strains have been known to secrete extracellular cellulases, pectinases, and proteinases. It is not totally understood how these secretions impact Frankia's symbiotic systems, but they are being studied along with other common enzymes and proteins, like uptake hydrogenase, that are found in Frankia's symbiotic relationships.A hydrogenase is an enzyme that catalyses the reversible oxidation of molecular hydrogen (H2). Hydrogen uptake is also present in free-living Frankia.(Sellstedt). 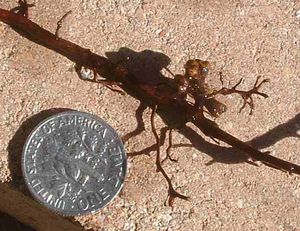 Frankia on the roots of Shepherdia argetea. From Las Pilitas Nursery.

Organisms in symbiotic relationships with plant hosts are necessary for the health and survival of certain plants. They assist in creating and transporting certain root hormones, controlling pathogens and nematodes, root exploration, water retention, mineral uptake, and resource sharing. Frankia specifically fixes nitrogen in the air and produces molecules that other plants can use. 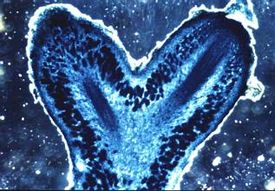 Frankia has symbiotic relationships with numerous dicot plants and is said to be responsible for 15% of the biologically fixed nitrogen in the world. One type of symbiotic relationship including plant, mycorrhiza, and Frankia is called a tripartite relationship and is a complex, multi-layered community of organisms that protect and support each other. Other symbiotic relationships include Frankia, one or multiple plants, and other bacteria. Frankia alni's specific role in these relationships is to infect the roots of plants: it deforms root hairs of its plant host by going into the cortical cells and causing the formation of nodules. Vegetative hyphae colonize the nodules and then differentiate into diazovesicles. (These structures can be seen on the bottom right-hand picture.) Diazovesicles are the thick-walled (containing hopanoids), spherical cells in which reductive nitrogen fixation occurs. 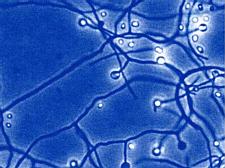 Frankia alni. The long structures are vegetative branced septate hyphae and the circular structures are diazovesicles - thick-walled cells that do nitrogen-fixation. From Genoscope