A Microbial Biorealm page on the Fusobacterium 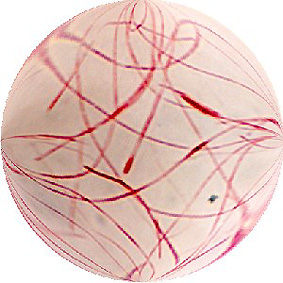 Fusobacterium nucleatum. Courtesy of the University of Adelaide.

Fusobacterium is a Gram-negative non-sporeforming bacterium that is widely known and studied as a human and animal pathogen. Fusobacterium's exceptional ability to adhere with both Gram-negative and Gram-positive plaque microorganisms in biofilms (specifically in soft tissue) has made it a highly invasive pathogen. Primarily given attention for its peridontal implications, strains of Fusobacterium have been identified as pathogen to many parts of the body (Weinstock). 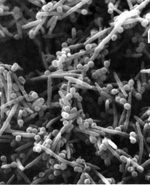 Fusobacterium inhabit the mucous membranes of humans and animals, serving as a pathogen to both. Because of its pathogenic and parasitic nature, Fusobacterium does not affect the environment directly, but it may alter the ecosystem by its effects on the population of infected host animals.

F. necrophorum infection in the liver of a lamb. Image Courtesy of AFIP.

Fusobacterium has several pathogenic strains, such as Fusobacterium nucleatum. F. nucleatum is known for causing typical dental plaque on human teeth as well as involvement in periodontal diseases and invasive human infections of the head and neck, chest, lung, liver and abdomen. The characteristics that make F. nucleatum such an efficient pathogen include its ability to adhere to a large selection of other plaque-causing microorganisms, allowing F. nucleatum to build on the previous biological damage. In addition, F. nucleatum has been documented as highly proficient in its ability to invade and resilient against host tissue cells (Oral).