Difference between revisions of "Geomicrobiology"

Welcome to the world of GEOMICROBIOLOGY!

In a nutshell, geomicrobiology includes microbes that "eat rocks". A more precise definition is "a subset of the scientific discipline microbiology. The field of geomicrobiology concerns the role of microbe and microbial processes in geological and geochemical processes. The field is especially important when dealing with microorganisms in aquifers and public drinking water supplies." (Wikipedia, 2008.)

This page will discuss a broad introduction to what geomicrobiological processes are all about, key microorganisms found in geomicrobiology, examples of such microbes, and current research in this field.

Geomicrobiology included organisms that are concidered extremophiles. Extremophiles are microorganisms that live in areas considered too hostile for most. An example of an extremophile is anerobic sulfate reducing bacteria, which are know to live in hyper-saline lagoons in Brazil and Australia. It is believed these bacteria may be responsible for the formation of dolmitea. A good example of an geomicrobe is Pseudomonas putidia a description of which can be found at [2].

Weathering plays an important role on Earth ecosystems and is important for the release of nutrients into the biosphere as a result of rock dissolution or the regulation of long-term climate by the consumption of atmospheric carbon dioxide from silicate alterations. Weathering has been considered a strictly physical and chemical process. Nonetheless, many weathering processes can be affected by the presence of microbial communities. All types of rocks are susceptible to microbial weathering, including siliceous and calcareous rocks. In general microbial weathering is due to the formation of organic acids or the production of metal-chelating siderophores on the surface of rock or minerals. Other processes include oxidative or reductive conditions of metals on rocks or minerals (Herrera et al., 2008). Additional information can be found in the following link: [3]

Precipitation of carbonates and phosphates

Microbiological studies on sediment cores collected by the Deep Sea Drilling Program (DSDP) and the Ocean Drilling Program (ODP) have demonstrated the presence of microbial communities in deeply buried marine sediments. Prokaryotes in the marine sub-seafloor biosphere have been estimated to comprise one-tenth to one-third of the world’s living biomass and therefore probably play an important role in global biogeochemical processes. Microbial populations in these regions vary considerably as a result of sediment type and age, organic matter availability, temperature and sedimentation rate. An example of the processes involved in this type of ecosystems was proposed for the Juan de Fuca Ridge in the northeast pacific and can be found below (Engelen et al., 2008). Additional information can be found in the following link: [5]

Fungi can be very radiation-resistant and can survive and colonize concrete barriers under severe radioactive contamination. After ten years of the catastrophe of Chernobyl in 1986 extensive fungal growth was observed on the walls and other building structures constructed in the inner part of the “Shelter” built over the fourth Unit of the Chernobyl nuclear power plant. Safe long-term storage of both existing and future nuclear wastes is of vital importance in protecting the environment, therefore the study of these fungi has been key for future construction of nuclear waste repositories. The deterioration of concrete by fungi is performed by common mechanisms used by fungi for rock and mineral weathering. Some of the microorganisms isolated from these extreme environments include modified strains from the genera Alternaria, Cladosporium, and Aureobasidium (Fomina et al., 2007). Additional information can be found in the following link:[6]

The Big Picture: a nice summary of microbial metabolism can be found at: 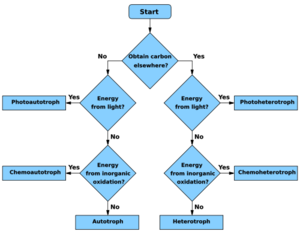 An important part of microbial metabolism is microbial energenetics. Microbial energenetics are driven by Gibbs free-energy yield derived from ATP. ATP is heterotrophically generated by fermentation or respiration. The latter requires terminal electron acceptors (e.g. molecular oxygen, nitrate, sulphate, ferric iron, carbon dioxide, or molecular hydrogen), and produces greater amounts of ATP per unit substrate. Fermentation is less feasible in the presence of either highly oxidised or highly reduced substrate, and may rise toxic products (simple organic acids) that can eventually impede the process. The energy in soil is preserved in both organic and inorganic components enabling the microbial communities to sustain catabolic and anabolic processes.

Examples of Geomicrobes as Related to the elements they metabolize 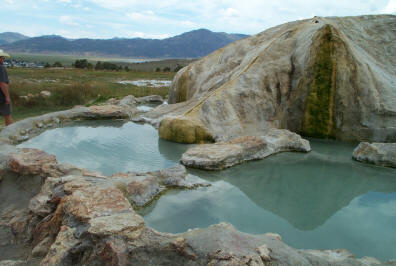 Example: 'Acidithiobacillus thiooxidans' consumes sulfur and produces sulfuric acid. This bacterium in conjunction with others of the same genus is currently used in a mining technique called bioleaching whereby metals are extracted from their ores through oxidation. The bacteria are used as catalysts.

Bacillus sp. strain SG-1 and 'Pseudomonas putida' are common soil and freshwater Mn(II)-oxidizing bacterium. Mn(II)-oxidizing bacteria are a diverse group found in almost all environments. These bacteria are up to 5 orders of magnitude faster than abiotic reactions in the production of Mn oxides which have an amorphous structure with a high surface area. Mn(II) oxides are the only known oxidants of Cr(III) in the environment. The mechanism of Mn(II) oxidation by these bacteria is not clear, although recent outcomes from studies with Bacillus sp. strain SG-1 have shown that a Mn(III) is an intermediate in the final oxidation of Mn(II) through enzymatic activity. For more information on this group of bacterium look at the reference from Karen et al., 2007

Contamination of aquifers by Uranium produced from nuclear weapons and fuel is becoming a real problem in different parts of the world. These aquifers are generally oxidized, therefore uranium predominantly exists as U(VI) usually coupled with carbonate making the compound quite soluble.

Uranium reduction occurs under anaerobic conditions with Fe(III) and/or sulfate reduction. The biogeochemical processes that occur after uranium reduction are poorly understood. Resent research has shown that the addition of nitrate (a common co-contaminant with uranium) to U(IV)-containing sediments leads to the oxidation and remobilization of U(IV). Microorganisms responsible in this process are believed to be associated with nitrate dependent Fe(II)-oxidizing microorganisms (Senko et al., 2005).

Phosphorus is an important nutrient for all living organisms. Most P found in living systems is in the form of inorganic phosphate and its esters. There are a number of studies showing biochemical reactions of P compounds that do not involve the formation of phosphate esters and these reactions involve compounds in which the P is at a lower valence state. On earth virtually all known phosphorus exists in the +5 oxidation state. Nonetheless, there are also two additional known forms phosphonates (+3) and phosphinates (+1). Studies have demonstrated the reduction of phosphate in anaerobic soil and during corrosion of metals under anaerobic conditions. A number of bacteria have been shown to be capable of oxidizing reduced P compounds when this is the sole source of P. Inorganic phosphite (+3) was oxidized to phosphate by numerous laboratory strains of microorganisms, including prokaryotes such as Escherichia coli, Agrobacterium tumefaciens, and several species of Pseudomonas and Rhizobium, as well as one eukaryote, Saccharomyces cerevisiae. Hypophosphite (+1) can also be oxidized to phosphate by Pseudomonas fluorescens, Bacillus caldolyticus and Pseudomonas stutzeri WM88. Apatite is the primary inorganic source of phosphorus in the biosphere. Soil fungi are known to increase plant-available phosphorus by promoting dissolution of various phosphate minerals. Some of the fungi involved are Zygomycetes in the order of Mucorales and Ascomycetes (Metcalf et al., 1998 and Rosling et al., 2007)

The Epsilon-proteobacteria have recently been recognized as globally ubiquitous in marine and terrestrial ecosystems. They play a major role in biogeochemical and geological processes and have been isolated from sulfur rich terrestrial and marine environments, some of which are considered extreme habitats. Most representatives are only known through the 16S rRNA gene sequence despite current effort to develop culture techniques (Campbell et al., 2006).

'Hydrogenophilaceae' also belongs to the Proteobacteria, and it is believed to be made of two genera. They are thermophilic bacterium growing in temperatures close to 50 °C. They obtain their energy from hydrogen oxidation. Example: Thiobacillus genus; includes only species from beta proteobacteria. This bacterium is used as a pest control in potato fields to control scabs.

There is a very interesting site hosted by the Geomicrobiology & Environmental Microbiology Studies at Louisiana State University [8] This site is filled with current research photos and informative discussions concerning the topic.

Geomicrobiology of the Tinto River, a model of interest for biohydrometallurgy Researchers have been using molecular and non molecular techniques to study the microbial ecology in the Tinto river (Southwestern Spain). The acidic conditions of the river (average pH 2.3) make it an example of an extreme environment. Researchers have found while sulfur does play a role in the rivers acidity Iron is the key element. Within the river Iron acts both as an substrate for oxidizing bacteria and as an electron acceptor in the anoxic areas of the river. Isotopic dating has concluded the rivers conditions have evolved from natural phenomena and are not the results of manmade pollutants. [9]

Key Laboratory of Marine Geology and Environment, Institute of Oceanology, China; has published on current research showing Rhodobaterales are primary surface colonizers in temperate costal marine waters. [10] In there study used nonnutritive inert materials such as plexi glass and glass to test for microorgansis in seawater off the Qingdao coast. The understanding is bacteria are know to be surface colonizers but which bacteria was relativly unknown untill now.