Lactose tolerance is the ability to digest the sugar lactose, which is predominantly found in dairy products. This property is made possible via the enzyme lactase, which converts lactose into the easily digestible sugars glucose and galactose via hydrolysis. While nearly all humans are born lactose tolerant at birth. This allows the developing child to feed on breast milk while it develops. Most often, this tolerance erodes over time as the individual matures. This absence of lactase results in lactose malabsorption, which can lead to an array of gastrointestinal symptoms known as lactose intolerance. However, certain populations have evolved lactase-persistence phenotypes and thus, continued lactose tolerance. This allows for these lactose tolerant populations to access a source of nutrition, most often dairy-based in nature, that would otherwise be unavailable to them. Therefore, it is unsurprising that areas that have historically possessed fewer non-dairy caloric alternatives house populations that have the highest amounts of selective pressure for lactose tolerance and therefore higher rates of lactose tolerance. According to best estimates, nearly sixty-seven percent of all humans globally are unable to digest lactose whereas in countries historically more dependent on dairy products such as Denmark, the rate of lactose malabsorption can be as low as four percent. Cite error: Closing </ref> missing for <ref> tag Christian Lovold Storhaug et al., F.A. "Country, regional, and global estimates for lactose malabsorption in adults: a systematic review and meta-analysis." 2019. Springer Link 6:2634-2637.]</ref> 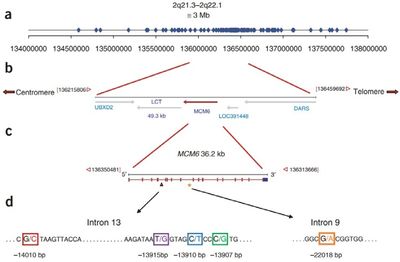 Many times throughout the course of human evolution, the Lactase-permanence mutation (LCT) has arisen. This mutation causes the retention of lactase production beyond the young age where humans would typically stop producing it. This Lactase permanence mutation, while resulting in a single phenotype, can arise from a wide range of separate SNP's (Single Nucleotide Polymorphisms). What all of these most prevalent lactose permanence enabling SNPs hold in common is that they result in constitutive mutations to the LCT genes.That is to say, lactase is always produced in lactase-persistent individuals, without any variance in production due to increased or decreased lactose uptake. If partial lactase-persistence is brought about by a mutation, it may or may not result in a lactose intolerant phenotype. Less than fifty percent lactase activity is often a useful benchmark in determining function. Below that level of activity, an individual will most likely manifest the symptoms of lactose intolerance.[1]