Difference between revisions of "Lymphatic Filariasis" 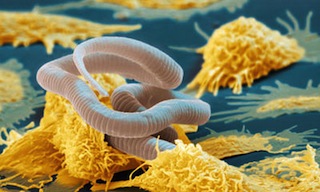 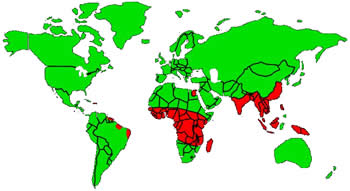 Currently nearly 1.4 billion people are at risk of Lymphatic Filariasis. Worldwide, the disease affects approximately 120 million people in 73 countries. It is commonly found in tropical and sub-tropical environments, such as parts of Asia, Africa, and Western Pacific regions. It has also been documented in parts of the Caribbean and South America, but is much less common. It is most prolific in Africa and the Southern Asian countries. Because it takes hundreds of bites from infected mosquitos, short-term tourists are not at risk of Elephantiasis.[3] 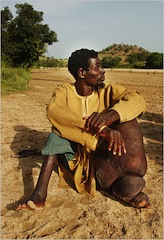 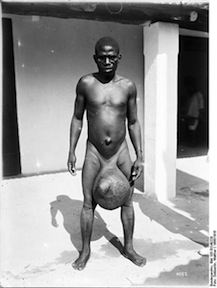 In humans, 90% of cases of elephantiasis are caused by W. bancrofti. Infections of the W. bancrofti parasite occurs in three stages.

1. During the asymptomatic stage there are high numbers of microfilariae circulating in the blood with very few, if any, adult parasites in the body. This period without symptoms can sometimes last years.

2. During the acute stage the adult female worm expresses antigens that are recognized by the host’s immune system. This recognition elicits a host inflammatory response. The adult worms, living in the lymph nodes, obstruct the lymphatic system causing a disruption of the flow of lymph fluid. This is known as lymphedema. Lymph fluid is responsible for draining fluid out of the tissues. The host will show symptoms of such as fever, chills, tender skin in the infected area, painful lymph nodes, and skin infections. These symptoms typically last 5 to 7 days.

3. The chronic phase is characterized by severely dilated lymph vessels, hydrocele, and swelling and thickening of the skin typically in the legs. This is commonly knows as elephantiasis. The chronic swelling leads to many folds in the skin and cracking of the skin. These skin folds and cracks are great places for bacteria to thrive and also breach the epithelial barrier, which leads to infection. Men are susceptible to hydrocele, swelling of the scrotum. This is caused by lymph fluid collecting in the scrotum, causing it to greatly increase in size.[7]

Many people affected by elephantiasis are unable to work due to their disfigurement, causing their families to further suffer due to their reduced income. Because the lymphatic system is also responsible for protecting the body against disease and infection, damage to the lymphatic system due to Elephantiasis has also led to diseases such as tuberculosis, leprosy, and numerous sexually transmitted diseases. The damage done due to elephantiasis is irreversible. The affected limbs cannot be surgically drained due to the fact that the lymph fluid swells the tissue instead of merely collecting in one area. The overstretched lymph nodes will never return to normal size, hindering their function. Eventually the parasites will die inside the lymph nodes.

The most accurate method for diagnosing a lymphatic filariasis caused by Wuchereria bancrofti is the Circulating filarial antigen (CFA) detection method. This method is regarded as the “gold standard” due to its extreme sensitivity and high specificity. This test is used to detect the microfilariae’s antigen circulating in the blood. The antigen is constantly circulating throughout the body, which allows for the blood sample to be taken at any time of day. There is an inexpensive test that can be done to diagnose an active microfilariae infection. The test is a microscopic examination of a blood smear looking for microfilariae in the blood. Due to the nocturnal periodicity of the microfilariae, the blood sample needs to be taken during the night. A blood sample taken during the daytime will likely produce a negative result. Ultrasound cannot be used to detect microfilariae, but can be used to detect rapidly moving adult worms.

There are several deworming drugs that are used to combat microfilariae infections. The drug companies GlaxoSmithKlein and Merck are donating billions of dollars worth of deworming pills to the World Health Organization to help aid their plan of eradicating Lymphatic Filariasis by the year 2020. GlaxoSmithKlein’s deworming pill is known as albendazole, and Merck’s drug is named Mectizan. The drug of choice in the U.S. is diethylcarbamazine citrate (DEC). DEC is inexpensive to manufacture and is done so by many companies, none of which donate their product. The most effective treatment has proven to be a 2-drug combination of albendazole and DEC taken once yearly. These deworming drugs are used to kill off the circulating microfilariae, while also killing off some of the smaller adult worms. Due to the large size of the average adult worms, many of them are not killed by the current drug treatments that are provided. Because of this, the current drug treatments are used only to prevent further transmission, not to cure the already infected patient. Since the adult worm’s life span is 5-7 years, the drug treatment must last 5-7 years in order to kill all living worms inside the infected host. Men can have a surgical operation to help alleviate their hydrocele by draining lymph fluid from the scrotum. These operations cost between $30 and $120, depending on the country.

The best way to prevent lymphatic filariasis infection is to avoid mosquito bites altogether. Since it is unlikely to avoid all mosquitos, personal preventative measures to protect against mosquito bites can be taken, such as sleeping in an area with mosquito nets, wear pants and long sleeve shirts when you sleep, and use mosquito repellent on the remaining exposed skin. The most effective prevention technique would be to eradicate the disease completely. As part of the World Health Organization’s plan to eradicate the disease by 2020 they have teamed up with UNICEF and The Bill & Melinda Gates Foundation. Their plan is to treat entire communities with DEC by administering it through salt treated with the drug. They suspect that over the next five years this project with cost upwards of $1.5 billion.

Created by {Kyle TrInidad}, students of Tyrrell Conway at the University of Oklahoma.