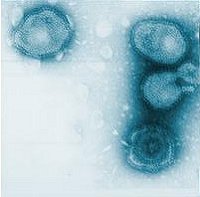 Mouse Mammary Tumor Virus (MMTV)was reported for the first time in 1933 by the Jackson Memorial Laboratory[1]. It was initially identified by studying inbred mouse strains characterized by a high incidence of mammary tumor[2]. Nowadays, it is the best studied oncogenic virus, causing 95% of mammary cancer in mice[3].

The genome of MMTV, a single stranded RNA molecule, has been fully sequenced in 1998. The genome is 8 kb in size and it encodes 7 genes [6]. The genome is bound at either side by a short direct repeat (R).Unlike most retroviruses, which contain a stop codon in the LTR, MMTV has an open reading frame which encodes for the sag protein, which is thought to be crucial in the infective process of mammary glands [1].

The MMTV virion is a B-type particle containing a genomic RNA dimer, encapsidated by NC proteins in the form of a helical nucleoprotein (RNP). Surrounding the genomic material is an apparently icosahedral capsid, formed by CA proteins. The capsid is bound to the envelope by the matrix protein MA. Finally, the viral envelope is characterized by several spikes, composed of a transmembrane protein and a surface protein [1].

MMTV can be transferred through either an endogenous (vertical) or exogenous (horizontal) pathway[1].

The endogenous pathway occurs when the virus is transferred from mother to progeny as a provirus, inserted in the host DNA. In a some strains there are as many as 14 proviruses, most of which are no longer functional. The proviruses are transmitted in mendelian fashion[2].

Not much is known about the entry and exit of MMTV from the host cell. The host cell receptor that seems to be the attachment site for MMTV is the surface glycoprotein gp52. The viral protein MTVR-1 is believed to attach to gp52, triggering the entry of the virion. Once the viral particle crosses the plasma membrane, it loses its capsid and retrotranscription of the viral genome begins. Once the provirus is synthesized, it migrates to the nucleus were it integrates in the host genome. If the provirus is integrated next to an oncogene, tumorigenesis may occur. Transcription of the viral genome is particularly active in the mammary glands and estrogen acts as an inducer of viral genes transcription[1]. 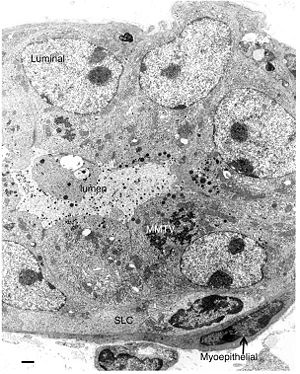 MMTV-induced neoplasia, is the result of several steps. The first step is characterized by the development of mammary hyperplasia. This abnormal state is followed by the formation of hyperplastic alveolar nodules, which are not yet malignant . Some of these nodules can further develop in malignant tumors. The induction of the first malignant tumors cause by MMTV requires the presence of glucocorticoid hormones[1].

The virus, when transmitted exogenously, first infects cells of the immune systems, like T-cells which later carry the virus to the exocrine tissue in the mammary gland [7].

Certain mouse strains are characterized by a strong resistance towards MMTV. These strains have been found to trigger a strong immune response against the virus. However, generally, resistance arises through limitation of viral replication to the mammary cell itself[1].

1. R.G. Webster and A. Granoff. Encyclopedia of Virology. Chapter on MMTV. Academic Press, 1994.