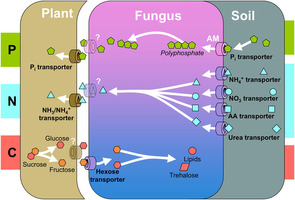 This picture shows the exchange of nutrients between the plant and the fungus. (3). 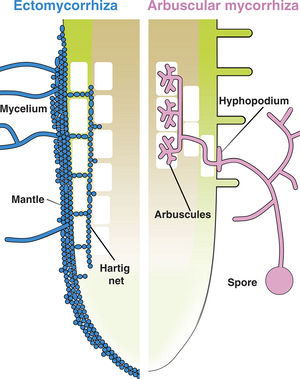 The major function of mycorrhizae is their ability to exchange nutrients between their surroundings and their host plant. With the increase in root surface area and the protection they offer to the plant's roots, the fungus is able to acquire a lot of nutrients for its host. Mycorrhizae are able to uptake water, inorganic phosphorus, mineral or organic nitrogen, and amino acids through specialized transporters located on their membrane (3). Once the water and nutrients are acquired, they can then be transferred to the host, who in return supplies carbon.