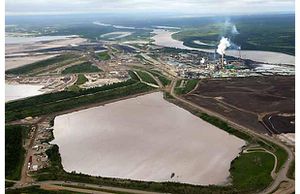 The oil sands in Alberta, Canada, covering over 100000 km2, produce over 1.3 million barrels of bitumin per day [1]. Extraction of bitumen by surface mining of oil sands requires large amount of water and hydrocarbon solvents. The resulting byproduct creates large volumes of water, sands, clays, residual hydrocarbons, heavy metals, naphtha diluents, and naphthenic acids, which are termed as tailings. Due to operational policies preventing zero discharge of any liquids into the environment, these fine tailings are collected and confined into settling basins to create tailings ponds [1]. Despite the toxicity of tailings, microbial communities exist in tailings pond, which aid to accelerate tailings sedimentation while being able to degrade certain compounds in the tailings.

Closer to the inflow, sand settles quickly. However, tailings consolidation of fine clays occurs by gravity at a slow rate over 5-10 years [6]. Stratification therefore results with older and denser fine tailings settled to the bottom and fresh tailings deposited on top. Temperature also increases with depth due to lack of surface cooling and retention of heat at 30-60˚C by deposited tailings [7]. Densification remains an operational challenge, which prevents water from being recycled while delaying the land reclamation process. Anaerobic methanogenic activities by syntrophic bacteria and methanogenic archaea also enhance the rate of tailings sedimentation. Microbe-formed gas channels assist the escape of methane gas bubbles which also aid to drain pore water from deeper tailings. Each day, about 43000m3of methane (CH4) is released. Sulfate and nitrate reduction by sulfate and nitrate-reducing bacteria, however, impeded the actions of methanogenesis, thus slowing the rate of tailings densification. Densification is reached when the volumetric fraction of solids (Fs) increase to 85%(w/w) [8].

In active ponds, wastes from bitumen extraction are continually collected in the basin. This results in continual input of electron donors and acceptors of metal ions into the pond. In active ponds, gypsum is added to aid densification while microbial activities are dominated by anaerobes at lower depths. In inactive ponds, wastes from bitumen extractions are no longer collected. In this situation, there are no inputs of electron donor and acceptors while microbial activities are confined to the upper depths with lower anaerobic activities. Therefore, the status of the pond influences the microbial community found [9]. 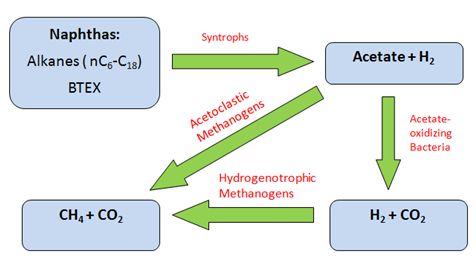 Anaerobic methanogenic hydrocarbon degradation is the source of CH4 emissions in tailings ponds. Metabolism begins with beta-oxidation of naphtha (such as long and short n-alkanes) to acetate and H2 by Syntrophus/Smithella. The acetate produced is coupled to methanogenesis either by acetoclastic methanogens to generate CH4 gas directly from acetate; or by archaeal hydrogenotrophic methanogens to reduce CO2 into CH4 with the utilization of H2 as a reducing agent following acetate oxidation [6][10]. Biodegradation of short n-alkanes (C<12) are preferentially selected by order of decreasing length of C-chains: C10>C8>C7>C6. Long n-alkanes (C≥12), however, do not show any preferential order of biodegradation [3][10]. Preference for BTEX biodegradation follows the sequence of: toluene>o-xylene>m-plus p xylene>ethylbenzene> benzene [2].

Anaerobic biodegradation of hydrocarbons under sulfate reducing and denitrifying conditions, by sulfate-reducing bacteria (SRB) and nitrate-reducing bacteria (NRB) respectively, is known to impede with methanogenesis. The competition for electron donors ultimately determines the predominance of SRB or methanogens under anaerobic conditions. With a slight advantage in thermodynamic and kinetics over methanogens, SRB outcompete methanogens for byproducts from syntrophs following hydrocarbon oxidation. Under high sulfate concentrations, SRB form consortia with syntrophs which allows SRB to utilize its H2, acetate, and other electron donors for sulfate reduction [5][11].

Sulfate reduction by sulfate-reducing bacteria with the utilization of acetate and hydrogen ions.

Microbial communities in tailings pond have high bacterial diversity, much of which changes with the depth of tailings. The cause of such observation is due to the differential stratification of hydrocarbons, metabolites, and electron donors involved in carbon and sulfur cycling. Importantly, methane concentrations varies with depth while sulfate concentrations increases with depth [11]. 16S DNA sequencing reveals individual microorganisms prevalent at different depths of tailings. 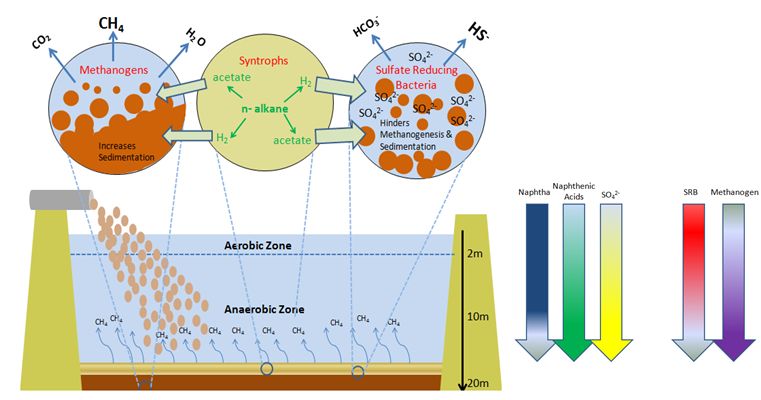 Pseudomonas, Acinetobacter, Alcaligens, Nocardia, Kurthia, and Xanthomonas species make up the aerobic populations of tailing ponds. Acinobacter spp. or Alcaligenes spp. dominate these depth of tailings, in which oxygen is present at the upper 1-2 metres of tailings ponds [1][5][9].

Acetoclastic methanogens, such as Methananosaeta spp, dominate the archaeal population in deep depths of tailings. Hydrogenenotrophic methanogens from Methanomicrobiales are less prevalent because of their disadvantage to compete with acetogens for H2 at lower temperatures [7]. However, when partnered with syntrophic bacteria, hydrogenotrophic methanogens dominate in CH4 production [6]. These methanogens together play a key role in CH4 and CO2 emissions. Equally important, proteobacteria, such as syntrophs (Pelotomaculum, Syntrophus, and Smithella spp) and sulfate reducing bacteria (Desulfocapsa and Desulfurivibrio), dominate the anaerobic layers [7]. These bacteria play a key role in biodegradation of naphtha and also influence methanogenesis by methanogens. 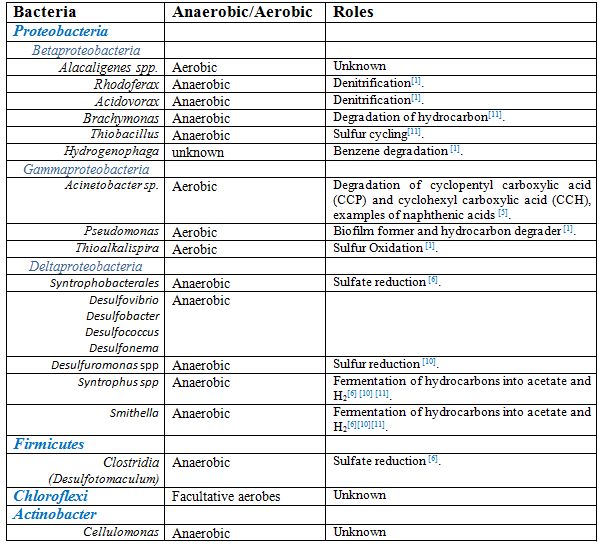 The challenges of bioremediation lie on the speed of sedimentation to allow pore water to be recycled for future bitumen extractions so that land recovery may begin. Therefore, understanding the roles of microbial activities and specific micoorganisms involved in degrading residual bitumen and naphtha under methanogenic or sulfate reducing conditions at different depths will provide researchers on how best to conduct bioremediation on tailings pond. Currently, to accelerate sedimentation chemically, Ca2+ cations from gysum are added to help neutralize the negatively charged tailings particle which promotes tailings flocculation for biodegradation [8]. This also has implication on the microbial communities present in tailings.

In Situ Bioremediation of Naphthenic Acids

Toxicity of refractory naphthenic acids (NAs) is another challenge faced in bioremediation. Plausible options to help degrade these refractory molecules involve: 1) bioaugmentating foreign bacteria in tailings which are capable of enhancing the degradation of NAs; 2) increasing the bioavailability of NAs by using attachment materials such as clays or introducing algae to bioaccumulate hydrophobic NAs for bacterial degradation; 3) biostimulating microbial growth with aeration, nutrients, and organic materials to enhance metabolism. These methods can be applied with wetlands and wet landscape approaches aimed at reclaiming tailings as a land surface or a wetland [5].