Difference between revisions of "Paramyxoviridae" 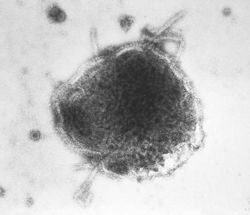 Paramyxovirus virions consist of an envelope, a nucleocapsid, and a matrix protein. Virions are large and have a complex construction. They are spherical to pleomorphic, and can range from 150-200nm in diameter and 1000-10000nm long. The envelope has spike-like projections spaced widely apart and evenly covering the surface. The surface projections are embedded in a lipid bilayer. The nucleocapsid is 600-800nm(-1000nm, depending on the genus), 13-18nm in diameter, and has helical symmetry. (source: ICTVdB) 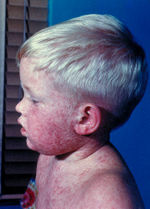 The ecology and pathology of paramyxoviruses varies greatly between the genera. Parainfluenza viruses and respiratory syncytial virus (RSV) cause respiratory infections, while morbilliviruses (including measles) and mumps virus cause systemic infections. All of the paramyxoviruses are transmitted through the respiratory route. Because of this, they are highly contagious. (sources: , Murray, Trayner)