Difference between revisions of "Plasmodium"

A Microbial Biorealm page on the genus Plasmodium 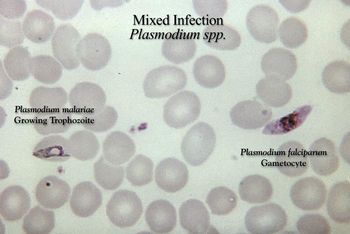 Plasmodium in blood. From the CDC.

Plasmodium, the parasite responsible for human malaria, is among the most researched genera of parasites in the world. Despite extensive studies on possible control methods, infection in humans continues to grow in tropic and sub-tropic areas. Currently there are an estimated 500,000,000 infected persons, with 1-2 million dying annually. There are four types of Plasmodium which cause human malaria: Plasmodium falciparum, Plasmodium ovale, Plasmodium vivax, and Plasmodium malariae. All of these are transmitted to human hosts solely by way of Anophele mosquito vectors. Plasmodium is one of the oldest known parasites; its long history suggests a long, adaptive relationship with the human host. Today cases of the disease are increasing in non-malarious countries as more people travel to Africa, India, Brazil, and some Asian nations, where the mosquito vectors are most prevalent. Symptoms of the disease may go unnoticed or misdiagnosed; clinical signs include fever, chills, weakness, headache, vomiting, diarrhea, anemia, pulmonary and renal dysfunction, neurologic changes. Untreated malaria may result in death.

The genome of the most common form of Plasmodium which causes human malaria, Plasmodium falciparum, has been sequenced completely, yielding 14 chromosomes and 5,300 genes--a large number of which are responsible for dodging the host's immunities. The average gene density is approximately 1 gene/4,338 base pairs. The mapping of this genome sequence provides new avenues for research on possible vaccines. Click here for a complete analysis of Plasmodium falciparum's genome sequence.

While the four major species of Plasmodium differ in some ways from each other, they all share the same complex life cycle involving the insect (mosquito) vector and the human host. When an infected Anophele mosquito bites a human, sporozoites are injected with the saliva. The sporozoites are 10 -15 µm in length and about 1 µm in diameter. They have a thin outer membrane, a double inner membrane below which lies the subpelicular microtubules. They have 3 polar rings and the rhoptries are long, extending half the length of the body. The micronemes, convoluted elongate bodies, run forward to the anterior of the sporozoite entering a common duct with the rhoptries. Mitochondria are located at the posterior end. After entering the circulatory system, the sporozoites make quick work of invading liver cells using the apical organelles (characteristic of all apicomplexans; for more details, see Apicomplexa).

Inside the host's liver cell the Plasmodium cell undergoes asexual replication. The products of this replication, called merozoites, are released into the circulatory system. The merozoites invade erythrocites and become enlarged ring-shaped trophozoites. In this stage the cells ingest the host cytoplasm and proteolyze hemoglobin into amino acids. Several rounds of nuclear divison yield a schizont. From these schizonts merozoites bud, which are released after rupturing the erythrocites. More erythrocites are invaded, and the cycle is reinitiated.

Sometimes instead of schizogony (as the schizont cycle is known) the parasites will reproduce sexually into micro- or macrogametocytes. Through gametogenesis these micro- or macrogametocytes morph into micro- or macrogametes. This may only occur after the gametocytes have been ingested by a mosquito. After said ingestion, the microgametocyte undergoes three nuclear divisions; the resulting eight nuclei become associated with thrashing flagella (this process is called exflagellation). The highly motile microgametes fuse with macrogametes and produce a zygote, which then develops into an ookinete. Once reaching the space between the epithelial cells and the basal lamina of the host, the ookinete develops into an oocyst. Asexual replication results in the production of a large number of sporozoites, which are released into the body cavity of the mosquito vector upon the maturation of the oocyst. The sporozoites are able to recognize the salivary gland of the vector, and are injected into the vertebrate host during the mosquito's blood meal, thus beginning the process over again. The four species of Plasmodium that affect humans are different morphologically, slightly in terms of their life cycles, in terms of their host erythrocite preferences, and varying clinical symptoms.

Images from the College of Biological Medicine, Ohio State University

Image from The Walter and Eliza Hall Institute of Medical Research

Plasmodium is a parasite which is widely distributed all over the world. Because it requires warm, humid environments for replication in the insect vector, malaria-generating species of Plasmodium are generally limited to tropical and sub-tropical locations. Global warming and population migrations do have a bearing on Plasmodium's distribution. Plasmodium falciparum is the most widespread in tropical and sub-tropical areas. Plasmodium ovale is most prevalent in the west coast region of Africa. Plasmodium malariae has a widespread distribution area but is fairly scattered within this area. Plasmodium vivax, like falciparum, ranges over a wide area, but in relatively rare in African countries. A number of methods of control have been tested and some, including use of DDT, have proved worthwhile, but drug resistance and other health concerns make some of these methods undesirable.

The first apparent mention of malaria-like symptoms was recorded in the ancient Nei Ching (The Canon of Medicine) about 4700 BCE. These writings also included many malaria treatments, among them the use of the Qinghao plant to reduce fever (1). Writings can also be found in cuneiform script on clay tablets and ancient Indian, Sumerian and Egyptian texts (2).

Hippocrates recorded manifestations of malaria in the 4th century BCE as well as the time of year and place where the victim fell ill. Hippocrates was apparently the first to distinguish the intermittent fever of malaria from the continual fever of other infectious diseases.

Malaria was long known to be associated with swamps. It was thought to be transmitted by wind, and its modern name in English is derived from the Italian mal'aria from mala aria , literally "bad air." The name was possibly first used by an Italian physician Francisco Torti (1658-1741).

In 1880, Charles Louis Alphonse Laveran, a French physician, discovered the parasite that causes malaria in humans, receiving the Nobel Prize for Medicine and Physiology in 1907. Later, Laveran went on to investigate the existence of the parasites outside the human body. He deduced that “the marsh fever parasite must undergo one phase of its development in mosquitoes, and be inoculated into humans by their bites” (3).

In 1890, Giovanni Batista Grassi and Raimondo Filetti, Italian investigators, introduced the names Plasmodium vivax and P. malariae for the two of the four malaria parasites which are now known to affect humans. In 1897, American William H. Welch revisited Laveran’s work and named a third malaria parasite P. falciparum. Finally in 1922, John W. W. Stephens found a fourth malaria parasite affecting humans, P. ovale. Ronald Ross, a British officer, discovered in 1897 that humans are able to pass the malaria parasite into mosquitoes by releasing malaria-free mosquitoes into the rooms of malaria patients. The actual life or sporogonic cycle of the parasites was first described in 1899 by Giovanni Batista Grassi (4).

A worldwide effort to eradicate endemic malaria was begun in 1955 by the World Health Organization. Their efforts included the spraying of houses with residual insecticides, anti-malarial drug treatment, and continual surveillance (4). This effort was successful in countries with a temperate climate and seasonal transmission of malaria, including Europe and Australia. Many other countries including India and Sri Lanka initially had marked reductions in cases. However these and other countries had little success long term, including all of sub-Saharan Africa. Failure to eradicate malaria derives from many causes. The most important are lack of funding, especially for long term efforts, wars and resulting population disturbances and emerging strains of drug resistant malaria, including resistance of mosquitoes to insecticides. Of particular concern currently is the rise in the Mekong region along the Thai-Cambodian border of Plasmodium strains resistant to the highly effective artemisinin drugs (5).

Malaria. Parasites and Health. Centers for Disease Control and Prevention.