A Microbial Biorealm page on the genus Protostelida

Because Protostelida are such recently discovered organisms, there is not yet an extensive body of research on the genome structure. 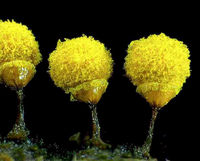 Protostelida are flagellated. Individual cells join to form a fruiting body. Their fruiting bodies consist of an acellular stalk with a small number of spores at the tip. The species Protostelium mycophaga has microtubule centers (MTCs) on opposite sides of the nucleus. Many other Protostelida contain MTCs that are remote from the nucleus. Some species, such as Schizoplasmodiopsis reticulata, have cell walls with irregular thickenings. In the ameboid phase of this and other Schizoplasmodiopsis species, organisms lack electron-dense bodies and mitochondrial surfaces covered with ribosomes.

Protostelida are heterotrophic. They feed off of the bacteria, yeasts, and fugal spores found in dung, soil, and decaying plant matter.

To the left is a diagram of the life cycle of the species Ceratiomyxella tahitiensis. It begins at A, with a sporocarp. The protoplast germinates (B). Then, all but one of the nuclei degenerate in the protoplast while it is converting into zoocyst (C-F). There are then three nuclear divisions in zoocyst (G-H). Then, mastigote cells cleave and germinate from zoocyst (I-J). The organism then enters the amebomastigote stage (K), then plasmodium (M). These plasmodium cleave into prespore cells, which become rising sporogen (N). This life cycle and description can be found at the Prostelid WWW server by Frederick W. Spiegel.

Protostelida are found in temperate forests and grasslands, where they can be located at both ground litter and aerial litter sites. They are also found on soil, bark, and dung. Some Protostelida species have been found in tundra ecosystems and boreal forests in Alaska (Moore et. al. 2000). These organisms were found on ground litter sites. Moore et. al. noted that Protostelida species diversity is lower at higher altitudes. Moore and Stevenson (2003) found that Protostelida are also capable of growing in Tropical Wet Forests, although two species common in temperate forests were rare in this environment.

Hands on the Land.