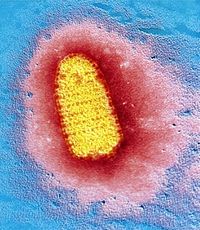 Rabies (derived from Latin word Rabere, meaning 'Rage') is a viral disease caused by Lyssavirus rabies virus. It is a neurotropic virus, capable of invasive infection of the central nervous system. The disease is extremely lethal to those unfortunate enough to show symptoms of the infection. The primary transmission of the virus to humans occurs through dog bites and scratches. The numbers vary widely form country to country, however, it is estimated that 55,000 people die per year from the rabies virus in Asia and Africa . The disease can be dramatic in its appearance as with many animals the disease is known to cause hyperactivity and sporadic behavior while becoming aggressive to things around them and eventually succumbing to paralysis of muscles.

"middle ages rabid dog" A woodcut from the Middle Ages showing a rabid dog. From: Wikipedia.com [2]

Rabies is a very old disease having originated before much of written history. The relationship between dogs and humans is shaped and altered greatly by the this disease originating from mad and crazed animals. Some of the oldest texts that are linked to rabies come from 2300 BC Eshunna, a Babylonian city, known for heavily fining people who's dogs bit others and lead to their death. Through out the Greek and Roman Empires rabies was well known and even widespread. The Greek philosophers even wrote that "dogs suffer from the madness." (Aristotle 400B.C.). It was the Romans who first described the saliva from rabid dogs as 'virus' which is Latin for poison. A Roman physician by the name of Celsus had a treatment for wounds caused by rabid animals that remained widely accepted from 45 A.D. till the 1900's. Many physicians in history have described the symptoms of rabies, came up with cures and temporary ailments for the sick. The first case of rabies reported in the Americas was in Mexico by a priest in 1703. The disease swept the entire world slowly over centuries until it was noted on every continent on the globe except Antartica.

In 1804 a German scientist by the name of Zinke begins conducting experiments using infected saliva on various animals, confirming that the disease does come from other infected animals. The key turning point in history for rabies comes in the 1880's when Louis Pasteur, a chemist, and his assistant, scientist, and physician, Emile Roux begin research for a cure to rabies. By 1883, the two have created was is to be the first vaccine against the disease, but the real test to prove to the public that it works comes in 1885 when a nine year old Joseph Meister is bitten by a rabid dog and brought to Pasteur who puts his career on the line by testing the new vaccine for the first time. The vaccine was a success and young Joseph Meister became the first person to be successfully treated for the disease. Pasteur being a chemist not a doctor is given immediate praise and hailed as a hero. This new vaccine is still used to this day and is still the standard treatment of rabies. The vaccine also works towards animals such as dogs leading to the campaigns of vaccinating pets to prevent the spread of disease.

"Rhabdoviruses" Structure of the virus particle From: Virology.ws [3]

Rhabdoviruses are negative stand RNA virues, having only a single strand of RNA genome that reads the opposite of the coding strand needed to produce protiens. The virus also contains and uses its own RNA dependent RNA polymerase to make the coding strand necessary for protein production. The overall shape of the virus is 'rod shaped', with one flat end and the other rounded, giving a bullet appearance. The average diameter is roughly 100 nanometers and a length of approximately 400 nanometers, however, the actually sizes of the virus particles do vary some. The viruses envelope consists of host plasma membrane Phospholipid bi-layers. The virus contains and codes for five proteins.

'G' Surface protein is a glycoprotein that forms a trimer. there excists about 1200 'G' proteins or 400 trimers per virus particle. The protein has a N-terminal signal sequence and is a transmambrane, crossing both phospholipid bi-layers. The 'G' proteins function is to bind to cell receptors on the surface of target cells, such as neurons in the central nervous system. This protein is also the target of antibodies and immunoglobulins from the adaptive immune response. There are three N-glyosidicaly attached sugar chains to the G protein. The virus enters the hosts cells cytoplasm through the endocytic pathway. When the virus becomes engulfed, the pH will drop, however, the sugar chain becomes stabilized at pH 6.1 and allows for the hydrophobic regions of the molecules to become embedded into the membrane of the hosts cell.

'M' Matrix protein is peripheral membrane protein that can be found in the inner membrane of the virus. The function of this protein not fully understood, but it is thought to act as a communicator between the 'G' protein and the nucleocapsid.

The Nucleocapsid is a striated structure inside the viral particle and takes on a helical shape. This structure consists of two proteins, the 'N' Nucleoprotein, and collectively the 'L' Large protein and the 'NS' Nonstructural or sometimes known as 'P' Phosphol protein.

'N' Nucleoprotein is a structural protein whose function is to cover the RNA for protection and allow for its transcription.

'P' Phosho Protein, having both the 'L' and 'NS', makes the RNA dependent RNA polymerase. The function of this complex is to generate the coding strand of the RNA contained in the virus perticle. This polymerase is approximately 240 kiloDalton's and roughly 60% of the viral RNA genome.

How the virus binds to a target via its receptors is not completely understood, but it is suggested through experimentation that the phospholipids, more specifically the phosphatidyl serine is involved in this process. Transcription occurs after the virus has been engulfed through endocytosis. The nucleocapsid is still contained within the virus capsule and now needs to reach cellular ribosomes in order to be transcribed. Once the pH inside the endosome drops, the membranes of the virus and endosome fuse, and the nucleocapsid is released into the cytoplasm. Multiple copies of the RNA are synthesized from the negative strand. Transcription takes place with the RNA being processed into five mRNA strand that make up some of the proteins encoded by the viral genome. Before the mRNA can be translated it is first capped, methylated, and polyadenylated. After translation of the mRNA into proteins, 'G' proteins is incorporated into the membrane of the endoplasmic reticulum and is transported to the cells surface via the golgi apparatus. Patches of these 'G' proteins then associate with 'M' proteins. A new nucleocapsid forms inside the cytoplasm from the synthesized proteins 'N','L', and 'P'. Formation of the nucleocapsid associates with the 'M' protein at the membrane budding off of the membrane with the new virus particle complete.

Infection to humans usually occurs through a bite or scratch from an infected animal. Saliva from infected animals, as well as humans, can cause rabies when in contact with mucous tissues or recent skin wounds. Inhalation of aerosols containing virus particles as well as transplant of viral infected tissues have also been documented as possible forms of transmission. Many animals have the potential to carry the virus, but the most common source is dogs. Bats are a common source in the Americas. Other animals known to carry the disease include foxes, raccoons, skunks, jackals, and mongooses. Human to human infection through bite or scratch is hypothetically possible, but has never been confirmed.

The rabies virus has a fairly long incubation period in comparison to many other viruses. Average time from inoculation to symptoms is approximately 1-3 months, however, cases have been reported of symptoms showing in as little as 1 week, and as long as 6 years.

No tests are currently available prior to symptoms to test for the viruses presence. The Virus can be confirmed via intra vitam and post mortem procedures that detect the virus as a whole, the viral antigens from host production, or the nucleic acids of the virus from infected tissues. Examples of these detection methods include reverse transcription polymerase chain reaction (RT PCR) test kits, negri bodies found in neuron cells, use of florescent tagged antibodies in infected tissues, live viral culturing (including WI-38, BHK-21, or CER), and several serological tests (including MNT, RFFIT, and EIA). Some of the tests can even be combined such as using IF on live tissue cultures to test for presence of rabies antigens.

Post-Exposure Prophylaxis is the main course of action needed to prevent rabies from causing disease. The type of interaction with a suspected infected animals dictates the specific action necessary for treatment and is generally understood in three categories.

(1) Touching, Feeding, and licking on skin require no PEP.

(2) Nibbling of uncovered skin, minor scratches with no bleeding may require immediate local treatment of wound and vaccination is recommended as a precautionary measure to prevent the disease.

(3) 1 or more trans-dermal bites or scratches or lick on broken skin, as well as contact of mucous membrane with saliva will require local treatment of wound(s), vaccination, and likely use of rabies immunoglobulin to prevent and counteract to virus.

Physical and chemical methods of cleaning wounds are recommended as effective methods of removal of the virus. Some examples of these methods include Rinsing the wound with water, soap, detergent, and providone iodine.

"Rabies Distribution" Data from the World Health Organization (WHO) 2012. From: nathnac.org [4]

The disease is absolutely preventable with the use of the vaccine. Do to the cost of health care, the best way to prevent the spread of rabies to humans is by eliminating rabies in animal (especially dog) populations. Vaccinating pets and controlling the wild life that comes in cantact with them are good preventative measures. Spade or neuter pets will help to decrease the number of stray animals and reporting any sick or stray animals to local animal control will also prevent the spread of rabies in near by areas. Rabies has been completely eradicated from a few countries, but there have been recent increases of the disease in Asia, Africa, and Latin America suggesting that the virus is becoming a re-emerging pathogen. By preventing rabies in animals such as dogs, the number of people needing Post-exposure prophylaxis treatment is significantly diminished.

Vaccinations can be used as pre-exposure preventative measures of immunization. People spending a lot of time in rural outdoor areas, especially travelers to high risk regions are recommended for vaccination. High risk jobs such as laboratory scientist working around the rabies virus, jobs that require working around bats, carnivores, and other mammals known to carry rabies in high risk areas are also recommended for pre-exposure vaccination. Children are at a higher risk of becoming infected because of close contact and play with animals. Children may be bitten and not tell others about bites they may have received and are recommended to receive vaccination.