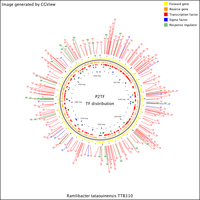 The genome of Ramlibacter tataouinensis is composed of a singular circular chromosome that is 4,070,194 base pairs with a guanine and cytosine content of seventy percent, among the highest of proteobacteria. Additionally, the average gene length is 964 base pairs. R. tataouinensis has genetic characterstics that greatly resemble those of aerobic chemo-organotrophic bacterial strain. Furthermore, this strain, R. tataouinensis TTB310 contains genes that encode for proteins to protect the organism against toxicity of reactive oxygen species. It is the first to reveal the kaiC gene that is rarely found within non-photosynthetic bacteria. The gene functions similarly to photosynthetic bacteria by allowing the organism to create an internal molecular clock to coordinate its cell cycle based on the availability of water found in dry and hot desert environments. [1]

R. tataoiunensis is gram-negative. Coccoid cells are enclosed by a thick capsule, have white sperical granules in the cytoplasm, and exhibit long-term resistance to desiccation. Rod-like cells are nanometric (0.2 micron diameter), vegetative, and also have spherical granules. Neither type of cell has flagella, but rods are motile via a gliding mechanism.

Standard biochemical tests have been conducted on R. tataoiunensis. Bacteria tested positive for beta-glucosidase and reduction of nitrate to nitrite, but negative on most tests, including indol production, urease, glucose fermentation, gelatin hydrolysis, and beta-galactosidase.

R. tataoiunensis is aerobic and chemo-organotrophic. The optimal pH and temperature for growth are 7.5 and 30 °C, respectively, and growth factors are required. This bacterium exhibits weak growth at 37 °C.

Ramlibacter tataouinensiswas first isolated in the Tatauoine meteorite in the desert of South Tunisia and is now known as the desert bacterium due to its unique cell cycle [5]. Desert habitats are considered one of the most extreme environments for microbial organisms because of the scarcity of water. Due to little rain and large variations in temperature, mineral content, and high levels of UV radiation desert microbes need to be highly adapted for the extreme environment. Ramlibacter tataouinensis survives in this habitat through desiccation and division into motile rods [1].

Other research on Ramlibacter tataouinensis has shown that bacteria can have circadian rhythms. This was discovered when researchers altered the times and amounts of UV radiation. This “circadian rhythm” was given by gene kaiC which governs a molecular clock mechanism which alters cell cycle based on day and night. This is called an endogenous circadian rhythm. [5]

Adaptation Secrets of the 'desert bacterium' Current research on Ramlibacter tataouinensis revolves around its ability to survive in extreme desert conditions where water, minerals, and extreme UV radiation are all worries for microbial growth. Ongoing research has been done on its cell cycle which consists of two stages where it can be non-motile and then as desiccation resistant cysts. Ramlibacter tataouinensis blocks its cell cycle in the cyst production stage during the morning in order to protect itself from extreme heat and dryness. The second cycle activates during the night when the temperature drops and dew can form. Research on how Ramlibacter tataouinensis survives in desert conditions has shed light on how cell cycles in bacteria can reflect its molecular clock. [5]

The Cyst-Dividing Bacterium Ramlibacter tataouinensis TTB310 Genome Reveals a Well-Stocked Toolbox for Adaptation to a Desert Environment Other research on Ramlibacter tataouinensis has shown that bacteria can have circadian rhythms. This was discovered when researchers altered the times and amounts of UV radiation. This “circadian rhythm” was given by gene kaiC which governs a molecular clock mechanism which alters cell cycle based on day and night. This is called an endogenous circadian rhythm. [1]