A Viral Biorealm page on the genus Rhinovirus 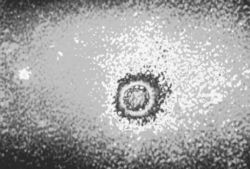 Rhinoviruses (RVs) are small (30 nm), nonenveloped viruses that contain a single-strand ribonucleic acid (RNA) genome within an icosahedral (20-sided) capsid. RV can be transmitted by aerosol or direct contact. The nasal mucosa is the primary site of onculation, although the conjunctiva may also be involved, though to a lesser extent. The RV attaches itself to the respiratory epithelium and spreads locally. The optimum temperature for RV repolication is 33-35°C and so does not replicate efficiently at body temperature. This could be the major reason why RV replicates well in the nasal passages and upper trachebronchial tree but not so well in the lower respiratory tract.

RV is best known for causing the common cold, although it has also been implicated in causing bronchitis and is the virus seen most often in asthma attacks. RV could very often be responsible for symptoms such as fever, cough and nasal congestions. It is important to come to terms with the fact that there is no direct medicine to cure the common cold. There is little or no cross-protection between serotypes, making it very difficult to make vaccines. Even antibiotics are not effective because they cannot destroy the RV. Hence, the best way to deal with RV is prevention. The virus seems to affect children first, and then there are many modes of transmission that range from aerosol to direct hand-to-hand contact. For now, the best cure seems to be to take plenty of fluids and over the counter medications such as nasal decongestants, antihistamines, and analgesics.

The capsid of the RV consists of a densely-packed icosahedral arrangement of 60 protomers, each consisting of 4 polypeptides, VP1, 2, 3 and 4 - all derived from cleavage of the original protomer VP0, with (pseudo) T=3 packing. The particle is 27-30nm in diameter, depending upon the type and degree of desiccation, while the length of the genome is about 2500nm when stretched out. Hence, the genome is tightly packed into the capsid with polyamines to counteract the negative charges on the phosphate groups.

Human Rhinovirus 14 has a pseudo T=3 icosahedral structure in which 60 copies of the three larger capsid proteins VP1, VP2 and VP3 are arranged in an icosahedral surface lattice, which reminds of the T=3 viruses such as tomato bushy stunt virus and southern bean mosaic virus. The overall seconary and teritiary structures of VP1, VP2 and VP3 are very similar. In the surface areas of contact, interactions between VP1 and VP3 are predominant. Major contacts among VP1, VP2 and VP3 are between the beta-barrel moieties VP4 is associated with the capsid interior by a distributed network of contacts with VP1, VP2 and VP3 wihtin a promoter. As the virion assembly proceeds, the solvent-accessible surface area becomes increasingly hydrophilic in character. A mixed parallel and antiparallel seven-stranded sheet is composed of the beta C, beta H, beta E and beta F strands of VP3 in one pentamer and beta A1 and beta A2 of VP2 and the VP1 amino terminus in another pentamer. This association plays an important role in holding pentamers together in the mature virion as this contact region includes more than half the total short non-bonded contact between pentamers. Contacts between protomers within pentamers are more extensive than the contacts betwen pentamers, explaining in part the stability of pentamers. The immunogenic regions are correlated with high solvent accessibility: accessibility to large probes and high thermal parameters. Surface residues in the putative cellular receptor recognition site, the canyon, have lower thermal parameters than other portions of the human RV 14 surface. A number of unsual crevices exist in the protein shell of human RV 14, including the hydrophobic pocket in VP1 which is the locus binding for the WIN antiviral agents. These may be required for conformational flexibility during both assembly and disassembly. The structures of the beta-barrells of human RV 14 VP1, VP2 and VP3 are compared with each other.

The RV is inhaled directly or finds its way to the nassal passage through hands that are contaminated with the virus. The virus is then transported to the back of the nose by the regular functioning of the nose itself. Here, the RV attaches itself to the receptors at the surface of the nasal cells, where it reproduces. These receptors are called Intercellular Adhesion Molecule- 1(ICAM- 1). The reproductive cycle of the RV is 8-12 hours long. Once the cells have been attacked, in the infected cells, the virus replicates as rapidly as possible, and continually sheds progeny viruses. These progeny viruses can propagate the infection by invading neighboring cells.