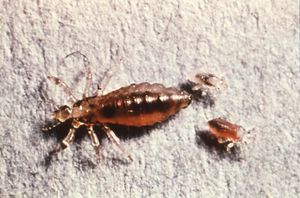 Rickettsia prowazekii is an intracellular, bacillus bacterium that is the cause of epidemic typhus in humans. In the early 20th century, Howard Ricketts linked typhus to Spotted Fever while Stanislaus von Prowazek discovered typhus was transmitted to humans by the feces of lice, not the bite. Both Ricketts and Prowazek were killed by typhus while working with the disease, so the bacteria was named for them. The genome was fully sequenced by the end of the century. Since World War II the only other major breakout was during the Burundo civil war in the late 1990's. Now, the main point of research regarding R. prowazekii is its linkage to the origin of mitochondria. R. prowazekii has a small genome and is the first alpha-proteobacterial, gram-negative genome to be sequenced. [3]

R. prowazekii is a Gram-negative, intracellular bacteria with a bacilli (rod like) structure. Genomic codes for LPS and Peptidoglycan formation are both complete in R. prowazekii'.

As mentioned above, R. prowazekii cannot produce pyruvate from any glycolytic pathway. However, enzymes required for pyruvate metabolism are coded for by Rickettsia indicating that the microbe must acquire it somehow. One such mechanism for this acquisition is acquiring phosphoenol pyruvate (PEP) directly from it's host. Rickettsia also lack coding sequences for nitrogen metabolism which allows the synthesis of glutamine, indicating that, like PEP, glutamine must be acquired directly from the host cells. [2]

Another key molecule produced is polyhydroxyalkanoate (PHA), which is produced in high numbers when the nutrient source for the cell begins to diminish. PHA's are great carbon storing molecules and in the case of cellular starvation, PHA will serve as a carbon and energy source to maintain survival. [5]

No research articles describing the ecology of R. prowazekii were found in my searches. For information on this subject try searching through the databases at the Center for Disease Control, http://www.cdc.gov or at the National Center for Biotechnology Information, http://www.ncbi.nlm.nih.gov/.

Lice do not pass R. prowazekii onto humans directly through their bites. The lice will bite or scratch the human host until the skin is broken but then the bacteria is transferred via feces from the louse left in the wound. The lice may infect multiple human hosts in this manner but will die within 2 weeks of infecting the first host. Because the lice die, and thus the number of organisms that can pass on the disease decrease, R. prowazekii is able to survive in its human hosts for long periods of time and reinfect a "clean" louse so that the cycle will continue. [7]

Epidemic Typhus will cause death in up to 40% of untreated cases. The Center for Disease Control classifies R. prowazekii as a class B bioterrorism agent due to its "ability to be acquired via aerosol (like anthrax another deadly pathogen), efficient anthropod transmission, and severe clinical outcome and death in untreated cases." [8]

Symptoms of epidemic typhus include early onset fever, nausea, muscle pain, and headaches. Also, after a few days after the fever comes, a pink rash will develop first on the extremities and will move to the stomach and buttocks. Eventually the pink will raise up and also become darker. [9]

Groups of scientists at the Unoversity of Uppsala in Sweden and the University of South Alabama are both researching the connection between R. prowazekii and ancestral mitochondria. Neither code for glycolosis while both code for the TCA cycle; basically, ATP production in both organisms is the same. R. prowazekii also contains 24% non-coding DNA, "Such non-coding sequences may be degraded remnants of 'neutralized' genes that await elimination from the genome." [10]

Finally, another research group is comparing the genomes of R. prowazekii and its close relative R. conorii. Specifically, the research is looking for proteins that will be good targets for antimicrobial drugs by examining the metabolic pathways of both organisms. [2]

4 Miklo´s Mueller* and William Martin; The genome of Rickettsia prowazekii and some thoughts on the origin of mitochondria and hydrogenosomes

7 Abdu F. Azad* and Charles B. Beard†; Rickettsial Pathogens and Their Arthropod Vectors