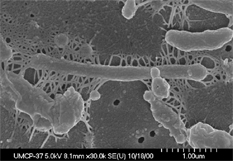 Saccharophagus degradans is a gram-negative bacterium which means that it has a cell membrane in addition to a very thick cell wall on top of its membrane. The cell wall provides additional protection against hydrophobic substances like antibiotics. A structural characteristic that led to S. degradans being placed into its own distinct group was that the major fatty acid used was different compared to its relatives in the Microbulbifer and Teredinibacter groups. While iso-C15:0 is used in Microbulbifer and Teredinibacter bacteria, S. degradans uses iso-16:0 (1). S. degradans mainly uses CPs as a source of metabolism. These include agar, alginate, cellulose, chitin, beta-glucan, laminarin, pectin, pullulan, starch, and xylan (2). Although it can use all ten of these, the agar and cellulose pathways have been most studied.

Agar degradation is only partially understood in S. degradans. What is known is that there are 5 identified agarases which are Aga50A, Aga50D, Aga86C, Aga86E, and Aga16B (2). All five of these are secreted and work together to break down agar using a beta-agarase pathway. Agar polymers are first cleaved into an oligosaccharide derivative and then processed into a disaccharide product (2). An unusual feature was found Aga16B and Aga86E. Both of these showed the presence of multiple 6 carbohydrate binding modules (CBM6) with Aga16B having two homologs of CBM6 and Aga86E having three (2). CBMs are common in carbohydrases but are extremely rare in agarases. In fact, only two other agarases were found to have CBMs (2).

A recent study was done to isolate the proteins and genes responsible for the agar degradation found in S. degradans. Cells were grown in agar cultures. Mass spectrometry revealed three agarases from these cultures which were Aga16B, Aga86C, and Aga86E. Two more were revealed using deletion analysis. A total of 5 different agarases were isolated with Aga16B and Aga86E being shown to contain CBM6 domains which were unusual for agarases. The research revealed that the system consisted of secreted endolytic agarases and surface beta-agarases (2).