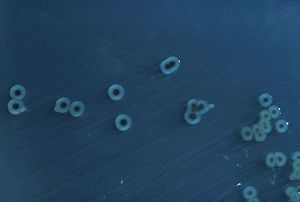 Salmonella Typhimurium, along with all bacteria of the genus Salmonella, are gram-negative, rod-shaped (bacillus), and facultatively anaerobic bacteria within the family Enterobacteriaceae. Salmonella are also glucose fermentors as when they are grown on a TSI agar slant it is possible to see that they undergo glucose fermentation and will produce H2S as well as other gases, in addition the TSI slants shows that they are not lactose or sucrose fermentors. [1] Salmonella Typhimurium is an important subspecies of Salmonella as when it is used within a mouse model the pathogenesis and symptoms of infection mimic those of a human infection with Salmonella Typhi (the causative agent of typhoid fever). Using a mouse model of Salmonella Typhimurium allows researchers to look for antigens that are conserved across various subspecies and look for antigens that could possibly be vaccine candidates. The strain BRD509 is of great importance in the mouse model and also in this search for possible vaccine candidates as it is an attenuated strain that retains many of the antigenic components that trigger an adaptive immune response allowing for infection to occur without killing the host. This allows for further procedures such as a challenge with a virulent strain of Salmonella, sacrificing infected mice at specific time points and viewing the cell populations using flow cytometry based analysis these methods along with others will further elucidate the pathogenesis and possible vaccine candidates.

One of the most interesting and important things about the BRD509 strain of Salmonella Typhimurium is the knockout of two of its genes, specifically the aroA and the aroD genes. [2] The knockout of these two genes plays a crucial role in attenuating the bacteria as this strain grows much more slowly due to the loss of the ability to synthesize essential metabolites. [2] The aroA gene and aroD genes are responsible for the creation of the enzymes 3-phosphoshikimate 1-carboxyvinyltransferase [3] and 3-dehydroquinate dehydratase [4], respectively, these two enzymes play a role in the creation of aromatic amino acids phenylalanine, tyrosine and tryptophan [5] [6]. It is this slowed rate of growth due to these missing amino acids that allows the hosts immune system to better handle the challenge of the Salmonella. Within the host Salmonella will make use of use glucose that it can find within the hosts body. The replication processes of Salmonella Typhimurium are very typical of most bacteria, undergoing fission, however, the location that this occurs is unique to Salmonella in that it will insert itself into host cells within a salmonella containing vacuole (SCV), in doing this it creates an environment for itself that will provide it will many of the needed nutrients for replication. [7] All species of Salmonella follow the same life cycle in which cells will be passed through the intestines with fecal matter and will leave the host organism when defection occurs. The Salmonella then must be transferred to a new host, through ingestion of the bacteria, which most often occurs from eating contaminated foods or water, the bacteria will then pass through the stomach into the intestinal tract where it will begin colonization.

Salmonella Typhimurium, much like all other species of the genus Salmonella, naturally live within the gastrointestinal system of both animals and humans. More specifically Salmonella thrives within the intestinal tract as it is not made to withstand the high acidity of the stomach.

The pathogenesis of Salmonella begins when contact with contaminated food or water occurs. Contamination occurs through contact of fecal matter with the food or water source and can occur through a lack of proper hygiene or it is also possible for insects, primarily flys, to play a role in contamination as they move from fecal matter to a food source. [8] After entering into the host and passing into the intestinal tract the bacteria will colonize the intestines, and then enter dendritic cells, enterocytes and M cells (microfold cells) along the intestinal epithelium. This process of entering into the host cells makes use of a series of a type III secretion system (T3SS1 as well as having many PAMPS (pathogen associated molecular patterns) the the host cell will detect and attempt to phagocytosis the Salmonella. However, the Salmonella creates a barrier preventing it from being destroyed called the salmonella containing vacuole. In this protected state the Salmonella will eventually be carried to lymph tissues such as the lymph nodes or the spleen, these are sites that Salmonella will gather. Some of the other virulence factors that play a role in pathogenesis is another type III secretion system (T3SS2) which plays a role in virulence as well as survival within macrophages, two genes on a virulence plasmid spvB and spvC both of which play unique roles in hindering the host defenses, superoxide dismutase which protects Salmonella by neutralizing reactive oxygen species that are produced by the host and a variety of ion acquisition proteins that collect required ions for cellular replication and bring them back to the bacterai. [9] After infection occurs a patient suffering salmonellosis (infection with Salmonella) would experience gastroenteritis the symptoms of which generally include nausea, vomiting, diarrhea that will sometimes include with blood and mucus, and slight fever. The salmonellosis will generally pass within a few days, after which the individual may obtain some degree of immunity, in infants less then one year old bloodstream infection (sepsis) is common and thus antibiotic treatment is recommended. If extreme cases of diarrhea and vomiting are experienced it might be necessary for someone suffering salmonellosis to enter the hospital to receive IV liquids to prevent dehydration from reaching a dangerous level. [8]

Page authored by Joshua McCarra, student of Mandy Brosnahan, Instructor at the University of Minnesota-Twin Cities, MICB 3301/3303: Biology of Microorganisms.