Difference between revisions of "Sarcocystis"

A Microbial Biorealm page on the Sarcocystis 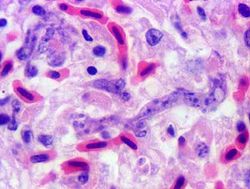 Merozoites of Sarcocystis falcatula in pulmonary capillaries. Image from College of Veterinary Medicine, University of Georgia.

Sarcocystis is a genus of parasites which affects a number of animals, both wild and domesticated. Members of Sarcocystis have two life cycles: one in the intermediate host (an herbivore such as a duck or rodent) and one in the definitive host (a carnviore such as a dog or wolf). The most common species is Sarcocystis rileyi, which causes the disease known as "rice breast disease" in waterfowl. Hunters who slice open infected animals may see small, white, cylindrical cysts in the breast and other muscles. Only in rare cases is the animal affected by the parasite; on these occasions they may cause weakness or lameness in mucles and limbs. In some areas of the world the species Sarcocystis cruzi infects a great number of pigs, sheep, and cattle. Luckily Sarcocystis demonstrates little or no risk to humans; the cysts are killed off when the meat is cooked. If the cysts are ingested, most commonly through undercooked infected meat, they may cause mild diarrhea or muscle tenderness. A more serious illness in horses, caused by Sarcocystis neurona is Equine Protozoal Myeloencephalitis (EPM).

Two of Sarcocystis' surface proteins, Sn14 and Sn16, have shown to be factors in the infection and immunity of Sarcocystis neurona in horses. Use of these proteins in vaccines may prevent the attachment and penetration of host cells. 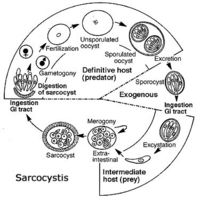 Life Cycle of Sarcocystis. Image from the College of Veterinary Medicine, University of Georgia.

Sarcocystis' parasitic cells are like those of all apicomplexans: they lack flagella and cilia, infecting the host cells by way of an organelle called the apicoplast (see Apicomplexa). Birds and other invertebrates consume the parasite in egg or oocyst form from the feces of infected vertebrates; the oocysts then develop into the sporozoite form in the intestines of the invertebrate. The sporozoites migrate to the animal's bloodstream and invade certain cells, which are then multiplied and give rise to the next form, the merozoite. These merozoites are carried by the blood to the animal's muscles, where whitish macrocysts are produced. When carnivores eat the invertebrate's muscle tissue, the parasites reach maturity and reproduce sexually in the host's intestine, releasing oocysts. In horses infected with Sarcocystis neurona, the sporozoites enter the endothelial cells and replicate asexually, developing into tachyzoites, which then migrate to the animal's central nervous system. Here they slowly replicate and gradually take over the nervous system, leading to clinical signs in the infected animal such as limb weakness, incoordination, and gait inconsistencies.

Sarcocysts are parasites which live in a number of hosts; therefore their distribution is wide and varied. They infect animals worldwide: North America, Australia, South Africa. So far Sarcocystis has not demonstrated a profound impact on its enivronment, but as of yet little is still known of this parasite and the diseases it causes. For this reason humans are discouraged from eating infected meat or feeding it to domesticated animals, but consumption has not been harmful or fatal. Controlling the parasite would involve disrupting its life cycle, but because it has not proved to be dangerous, such measures have not and probably will not be taken.

Sarcocysts in the breast muscle of a mallard duck. Image from Manual of Common Diseases and Parasites of Wildlife in Northern British Columbia.