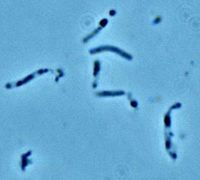 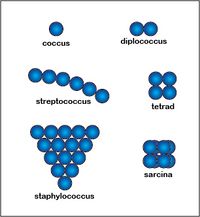 S. ureae tends to form clusters--or sarcinae--of four or more cells. Colonies are circular, gray and opaque and slightly convex. The species is heterotrophic and explicitly aerobic.[2] The organism can grow in a normal nutrient broth, however it performs much better when in the presence of urea, which is likely due to the ease with which glutamic acid and glutamine can be produced from ammonia or ammonium if the medium is alkaline.[5]

S. ureae possesses the ability to form spores when faced with specific conditions. In particular, sporulation can be induced in an experimental setting by incubating at 22°C or less in a a variety of specifically composed media. The spores are able to withstand temperatures of up to 80°C for no more than ten minutes.[2]

S. ureae is widely distributed in soils, with fertile soils containing as many as 10000 sarcinae/g. [6] While S. ureae is best adapted to a neutral habitat, it is tolerant to a pH as high as 10. While S. ureae does not have a specific symbiotic relationship per se, its conversion of urea to ammonia is most likely beneficial most if not all plant life where it is found, as urea can be toxic to plants.[7] In a biogeochemical and environmental sense, S. ureae serves an important role in preventing urea levels from becoming too high in an area, permitting continued inhabitance by other species.