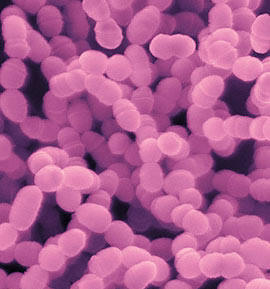 Streptococcus mutans are gram-positive cocci shaped bacteria. These facultative anaerobes are commonly found in the human oral cavity, and is a significantly contributor of tooth decay. The result of decay can greatly affect the overall health of the individual. [1] S. mutans are mesophilic and grow at temperatures between 18-40 degrees Celsius. Streptococcus mutans is a cariogenic microorganism that breaks down sugar for energy and produces an acidic environment, which demineralizes the superficial structure of the tooth. The result of the conversion disintegrates the coating of the tooth then later dissolves the Calcium molecule creating a hole. Transmission of S. mutans can be found in people of all ages although it is more common for infants and children. The transfer of genotypes are responsible for the transmission of S. mutans from mothers to their children although, there is a genotypic variation from one population to the next.[2] Someone with a healthy oral flora will roughly contain 10,000 CFU per ml of Streptococcus mutans in their mouth.[3] Streptococcus mutans possesses three virulence factors: water insoluble glycans, acid tolerance, and production of lactic acid. [4] A toothache is the most common symptom of tooth decay. An infection or irritation of the tooth pulp usually causes the pain. The dentist is usually the person to diagnose tooth decay by taking X-Rays, and sometimes the X-Rays can detect the formation of a cavity before it is fully intact. If diagnosed with tooth decay, there are many treatment options such as: fillings, crowns and root canals. Since every human has bacteria in their mouth, the only prevention is to lessen the impact of acid fermentation by practicing adequate oral hygiene. [5]

Streptococcus mutans is considered to be part of the "normal" flora of the human mouth, which is associated with dental caries also known as tooth decay. Dental caries is an infectious and communicable dental disease that affects people of all ages. Streptococcus mutans can be passed from one person to the next via horizontal or vertical transmission. The transmission route of Streptococcus mutans is to colonize itself among human hosts. Children and infants are more prone to the diagnosis of Streptococcus mutans and studies show that many receive it from their primary caregivers. [2] S. mutans favors hard non-shedding surfaces to establish permanent colonies, which implies that levels of S. mutans are undetected in infants until the primary teeth extravasate;although, recent studies have shown that S. mutans is able to colonize the furrows of the tongue in pre-denate infants. Typically between the ages of one and two, teeth erupt, which allows S. mutans to establish flourishing colonies on teeth, and causes cavities. The indication of cavity formation is the appearance of detectable levels of bacteria on teeth. When S. mutans is detected in the furrows of the tongue it is concluded that the vertical transmission route for the bacteria from mother to child arises shortly after birth. To prove this, saliva samples of two to five year old children were taken, which revealed a high fidelity in genetic make-up of each host's S. mutans population. These experiments also concluded that plasmid DNA correlates to different rates, which primarily implies vertical transmission. Mothers with large amounts of bacteria or those who have suffered from many dental caries themselves are likely to transmit the same virulence factors to their children. When the mother's salivary S. mutans levels exceed 105 Colony Forming Units they are nine times more likely to pass bacteria on to their children. [6]

The growth and metabolism of S. mutanss changes the environmental conditions of the oral flora, which enables fastidious organisms to colonize and causes the formation of dental plaque. Streptococcus mutans is a specialized microorganism equipped with receptors that allow it to adhere to the surface of the tooth creating a slimy environment. After adherence to the tooth, S. mutans begin to divide and produce microcolonies within the slime layer to construct a biofilm. S. mutans begin to grow and synthesize dextran with the enzyme dextransucrase. Dextran contains a capsule that binds to the enamel and forms a biofilm that consists of 300-500 bacterial cells. The biofilm metabolizes S. mutans and is able to cleave sucrose with the enzyme Glucansucrase in the reaction: n sucrose -------> (glucose) n + n fructose. With these products fructose is fermented as an energy source for bacterial growth while glucose is polymerized to an extracellular dextran polymer. This is important because the polymer cements S. mutans at the enamel and becomes the matrix of dental plaque. The dextrin can also depolymerize to glucose and use the monosaccharide as a carbon source, which produces lactic acid in the biofilm by decalcifying the enamel, and leads to dental caries. The combination of acid and plaque results in the causative agent of decay. [7]

Bacteria are the most numerous microbes in the mouth. It has been estimated that there are over 100 million in every milliliter of saliva from more than 600 different species.[8] In order to decrease the bacterial challenge, it is encouraged for people to have 10,000 CFU per ml of saliva Streptococcus mutans in their mouth. [3]

In the table, class 0-3 is referring to how many Streptococcus mutans reside in the mouth with class 0-1 acting as best case with good oral hygiene, while class 3 acts as the worst case. [3]

The Decayed Missing Filled also known as the DMF index is the key to measuring the caries that are caused by the bacterial strain Streptococcus mutans. The DMF index expresses the total number of teeth or surfaces that have decayed. When the index is applied specifically to teeth, it is called the DMFT index. The DMFT index scores the individual tooth from 0-28 or 32 depending on the presence or absence of the third molars. When the index is applied to the tooth surface it is called the DMFS index and scores from a range of 0-128 or 148 also depending on the assumption if the third molar is included or not. [9]

There are three virulence factors that are associated with the cariogenicity of Streptococcus mutans . The first property is dependent on the synthesis of water-soluble glycans from the disaccharide sucrose. Next, S. mutans possesses the ability to become more acid tolerant. This leads to the third characteristic, which displays a production of lactic acid from dietary sugars. [4]

Streptococcus mutans can be identified by a chalky white spot on the surface of the tooth indicating an area of demineralization of enamel, which is commonly referred to as a carious lesion. A carious lesion is the earliest diagnosis of tooth decay formation. As the lesion further demineralizes, it can turn brown and will eventually result in a cavity. Before the formation of the cavity, the process is reversible, but once the Streptococcus mutans forms the cavity, the tooth structure is lost and cannot be regenerated. A lesion that appears shiny and dark brown suggests that a lesion was once present but the demineralization has stopped leaving a stain. As the enamel and dentin are destroyed, the cavity becomes more noticeable. The effected area of the tooth changes color and becomes sensitive. When the decay passes through the enamel, the dentin tubules allow passages to the nerves making the tooth exposed, which results in pain that temporarily worsens with exposure to heat, cold,sweet food or drinks. If the tooth is weakened by substantial amounts of internal decay a fracture may occur under normal chewing forces. Pain will arise more constant when the decay has progressed enough to where the bacteria can overwhelm the pulp tissue that is located in the center of the tooth.
In addition to cavity formation of the bacterial strain Streptococcus mutans , dental caries can also cause bad breath and foul tastes, and gum disease. In highly progressed states, the infection can spread to the soft tissue from the tooth. Life-threatening complications may arise such as cavernous sinus thrombosis and Ludwig's angina. [10]

Streptococcus mutans and Streptococcus sobrinus are two microorganisms that reside in the mouth of a human. S. mutans is carried by everyone while S. sobrinus is carried between 8 and 35 % of people in different countries. These different bacterial strains can be distinguished by laboratory tests although the procedure is expensive and time consuming; therefore, it is not always practicable to identify the species in a large epidemiological scale. Researchers not invented a selective media that would allow one to look at the presence of a single species in saliva samples. Because of this, researchers have combined the two species together as mutans streptococci also known as (MS). Since Streptococcus mutans is more prevalent than Streptococcus sobrinus most of the isolates will solely be S. mutans. Mutans streptococci can be cultured in a laboratory by taking a sample of the microorganisms in the mouth. The microbiologist can then use two types of selective media that are widely used to isolate caries-related Streptococcus on Mitis- Salivarius agar and TYC agar in which antibiotic Bacitracin is added. These types of media suppress the growth of most microorganisms but allows the growth of Streptococcus mutans and Streptococcus sobrinus . The inclusion of sucrose leads to the formation of glucans and the appearance of colony formation to aid identification. Diagnostic kits used in dental clinics are based on similar selective media, but it is important to note that they are measuring for total MS, not just S. mutans . [11]
If the strain of Streptococcus mutans has already invaded the tooth enamel, a dentist will diagnose the tooth decay. The dentist begin by asking questions about the patient's dental history and medical problems. Next, the dentist will examine the patient's teeth by using an explorer and a small mirror. To confirm that a tooth has decayed the dentist will take X-Rays of the mouth to examine the teeth as well as the gums. [12] 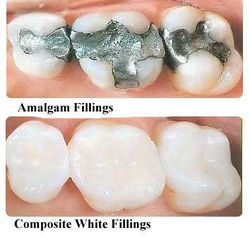 It is a fact that every human has bacteria already existing in their mouth. The only prevention is to lessen the impact of the fermentation by product lactic acid. Brushing, flossing and reducing the intake of refined and processed sugars can accomplish this. These processed sugars come in the form of sweets, colas and processed powered sweeteners. Studies have shown that rinsing one's mouth out with water can greatly reduce the probability of cavities after the consumption of these sugars. It is almost impossible to completely reduce the effects of S. mutans but there is an option to control it. [16]

Streptococcus mutans is the major pathogen of dental caries due to the ability to adhere and accumulate to the tooth surface. The Innate Immune Response and the Adaptive Immune Response are two fundamental aspects of the immune system that respond to infections such as dental caries. Streptococcus mutans enters the host through the oral route. The mucosal tissue associated with the exocrine glands and saliva contributes to the production of the oral cavity. This is because; these regions contain cells responsible for antigen internalization and antibodies specific to oral bacteria. The secretory antibodies that protect against dental caries are IgA and IgG. The Macrophages of the innate immune response are phagocytic cells that can internalize and kill bacteria by several mechanisms of internalization, which includes macropinocytosis and phagocytosis. If Streptococcus mutans initiates dental caries after the teeth have erupted either the host did not undergo the effective immune response of secretory IgA played a small role in preventing colonization and subsequent plaque development. [7]

Created by Taylor Zelnicek, student of Tyrrell Conway at the University of Oklahoma.