Difference between revisions of "The grand prismatic spring" 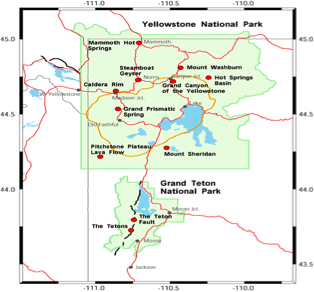 The Grand Prismatic Spring, located in the Midway Geyser Basin, is the largest hot spring in Yellowstone National Park and the third largest in the world. It was discovered and named by the Hayden Expedition for its prism-like coloration.

A hot spring is a natural spring of geothermally heated groundwater that flows along the Earth’s crust, or volcanically active regions.[1]

The center of the pool is sterile due to the extreme temperature. Without any organisms, this area has the deep intrinsic blue colour of water, as the result of water’s absorption of red wavelengths of visible light. The edges of the pool consists of bands of different colours and each band in the “microbial rainbow” represents a mini-ecosystem.

Several pigmented bacteria grow in the microbial mats at different ranges of temperature. In these thermal gradients, or distinct zones of microbial communities adapted to a specific temperature, microbes produce bright colours such as green (chlorophylls) and red (carotenoids). Depending on the amount of sunlight, the temperature of the water changes throughout the year, and may favor one kind of microbe over another. In the summer, the photosynthetic microbes in the mats produce dark red and orange pigments as a form of protection from the intense sunlight. During the winter, the mats appear dark green due to the domination of green photosynthetic pigments.[3]

The pH of the Grand Prismatic Spring varies slightly from 7.0 to 8.3 mainly depending on the temperature of the pool. [4]

The pool sits on top of rhyolitic rock, which is a type of lightly coloured volcanic rock with high silica content. Trace amounts of silica from the rocks could be dissolved by the water and circulate at the surface of the hot spring. Silica compounds in the water rapidly precipitate and deposit as siliceous sinter at the edges of the pool to create the white-grey zones around the spring. Other thick mineral deposits, such as travertine (calcium-carbonate) and crystalline sulphur are also present in or around the spring .[5]

The microorganisms present at the Grand Prismatic Spring are mostly extreme thermophilic bacteria and archaea. These non-spore-forming thermophiles thrive at their tolerated temperature ranges. The characteristics of these microorganisms are summarized in Table1.

Calothrix sp.
They are photoautotrophic cyanobacteria that form brownish-black stratiform mats. They fix nitrogen by taking N2 from the air and converting it to consumable nitrogen for themselves and other organisms.[6] They live at 30°C in the outflow of the shallow hot spring and along the moist edges of some other thermal features. Calothrix sp. contain scytonemin, which is a dark brown pigment within the external sheaths of their filaments. This pigment acts as a protective shield against UV radiation.[7]

Synechococcus sp.
They are gram negative cyanobacteria that produce yellow-green biofilms. They perform oxygenic photosynthesis and fix CO2¬ in the process. They are unicellular and live at 72°C. They provide organic carbon for heterotrophic microbes, such as Chloroflexus.[8] Some researchers have shown that Synechococcus sp. can fix nitrogen and produce nitrogenase.[9] Accordingly, nitrogen is usually the limiting source for their growth. The pigments present in Synechococcus sp. are chlorophyll a and phycobiliproteins, which are unique pigments that fluoresce yellow-orange at the wavelengths of 570-620nm. [10]

Phormidium sp.
They are orange filamentous cyanobacteria living at temperatures of 45-60°C. They produce long streamers in rusty brown mats and live closely with Chloroflexus and other bacteria to establish a microbial ecosystem. They mainly produce carotenoids.[11]

Thermus aquaticus
They are chemotrophic bacteria living at 70°C. They are filamentous and produce yellow pigments. They live in a mutual relationship with cyanobacteria by taking energy for growth from the photosynthesis of these microorganisms.[13]

Table 1 Key Microorganisms present in the Grand Prismatic Spring and Their Characteristics.

Thermophiles have evolved to survive under harsh conditions. They have heat stable proteins that cannot be easily denatured. Some of the important features of these proteins include the following:[14]

There are also several eukaryotes that live in the hot spring run-off channels and this diversity of organisms establishes a simple food chain. Cyanobacteria are at the bottom of the food chain. They utilize light energy and produce organic matter. Ephydrid flies feed on cyanobacteria and thrive in the bacterial mat. Predatory insects such as spiders, dragonflies and beetles feed on Ephydrid flies. These predatory insects are prey for larger carnivores such as killdeers, the most common birds founds in the hot spring areas.[13] This food chain is illustrated in Figure 3.

The Grand Prismatic Spring is an alkaline thermal pool that consists of a variety of pigmented thermophiles growing at different ranges of temperature. These unique microbes are well-adapted to the extreme conditions of the spring and form communities with other archaea, prokaryotes, and eukaryotes.

The search for thermophilic enzymes has sparked an interest for many researchers due to their high economic potential for a variety of applications in the pulp and paper industry and the molecular biology industry.

Several microbes found in the Grand Prismatic Spring are tungsten-dependent. Tungsten has several medical applications such as in brain sensor implant and anti-viral applications.

The hydrothermal ecosystems found in the Grand Prismatic Spring may serve as analogs to the ecosystems in similar environments on Mars.