Difference between revisions of "Thermophiles in Astrobiology and Biotechnology"

A thermophile is an organism that thrives at relatively high temperatures, between 45 and 122°C. Thermophiles are found in a numer of marine and terrestrial geothermally-heated habitats including shallow terrestrial hot springs, hydrothermal vent systems, sediment from volcanic islands, and deep sea hydrothermal vents. As prerequisite for their survival, thermophiles contain enzymes that can function at high temperatures. Investigating the DNA and protein stability of thermophiles is important because they can reveal what extraterrestrial life may look like and can give insights in biotechnology. 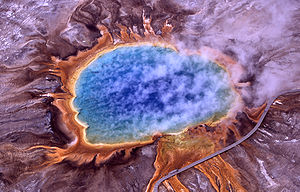 They found in geothermally heated regions of the Earth like deep-sea hydrothermal vents and the hot springs of Yellowstone National Park (Figure 1). The investigation of thermophilic structure and chemistry poses very promising and intriguing contributions to the scientific community. For one, some of the enzymes used in molecular biology, like DNA polymerases, have derived from investigating heat-stable enzymes. Perhaps the quintessential example of a successful biotechnological application of thermozymes is the use of Taq polymerase, isolated from Thermus aquaticus 6, for PCR.

In addition, astrobiologists look to understand the structural and genomic correlates of hyperthermostability to give indication to what life may look like on planets hotter than ours. Astrobiologists, including researchers from NASA, suggest that hot springs all over the world provide some of the best "doorways into early Earth." 7 Many scientists believe that life might have begun roughly 4 billion years ago in high temperature environments and that the first organisms might therefore be thermophiles. Not only does this give insight into the origin of life on Earth, but opens up a new realm of possibilities for life elsewhere in the universe.7


Research has recently begun to investigate physical adaptations that allow thermophiles to remain functional and alive at high temperatures. Over the last 20 years, researchers have begun to discover key structural components of proteins and DNA that allow a thermophilic lifestyle. First, increasing the number of salt bridges is a driving force for enhancement of the thermotolerance of proteins from hyperthermophilic microorganisms.2 Second, research suggests that the replacement of polar noncharged residues by charged ones constitutes a major stabilization mechanisms in the proteins of hyperthermophilic organisms.3 Third, disulfide bond abundance has been observed increases as a function of the maxiumum growth temperature of an organisms increases.14 Fourth, thermophilic protein sequences are more likely than their mesophilic homologs to have deletions in exposed loop regions. Lastly, the guanine-cytosine (GC) content levels of the coding/non-coding regions of certain genes are highly likely to be correlated with the temperature range conditions of prokaryotic organisms.

High temperatures can often denature vital enzymes and proteins. In terms of proteins, heating affects the secondary structure of proteins, causing changes in the shape of the molecule. Specifically, heat disrupts hydrogen bonds and non-polar hydrophobic interactions. This occurs because heat increases the kinetic energy and cause the molecules to vibrate so rapidly and violently that the bonds are disrupted. Changing a proteins shape can alter its natural function which can disrupt vital processes like metabolism. In order to withstand hot temperatures, thermophilic proteins can exhibit higher core hydrophobicity9, greater numbers of ionic interactions10, increased packing density11, additional networks of hydrogen bonds12, decreased lengths of surface loops4, stabilization by heat stable chaperones13, and increase in disulfide bond formation14 and a general shortening of length15.

Figure 2. Comparison of the capsid surface residues in lumazine synthase from (a) Bacillus subtilis and (b) the hyperthermophile Aquifex aeolicus

Table 1. Number of salt bridges in proteins from thermo- and hyper thermophilic organisms (see Table 1 in Karshikoff and Ladenstein 2001)

The optimization of electrostatic interactions by increasing the number of salt bridges is a driving force for enhancement of the thermotolerance of proteins from hyperthermophilic microorganisms. 2 This trend is less evident in thermophilic organisms and absent from mesophile-derived proteins. A salt bridge is a combination of two noncovalent interactions, hydrogen bonding and electrostatic interaction. Salt bridges often occur between groups distant in the protein sequence and form cross-links that stabilize tertiary structure. This interaction can increase the kinetic barrier towards thermal inactivation or thermal unfolding and, thus, prevents proteins from denaturing at high temperatures.

Table 1 shows the number of salt bridges in select thermo- and hyperthermophilic organisms. Ns indicates the number of salt bridges, Nr represents the number of salt bridges statistically expected for that protein structure, and Topt represents the temperature of optimal growth for the protein. Proteins from hyperthermophilic organisms are characterized by an increased number of ion pairs with respect to the statistical expectance and/or the number of ion-pairs in their mesophilic counterparts. This finding suggests that electrostatic interactions are a principal factor responsible for the elevation of the melting temperature of proteins from hyperthermophilic organisms.
The figure and table above show that charged residues in the enzyme from Aquifex aeolicus replace most of the polar residues in the Bacillus subtilis enzyme. Specifically, the number of ion pairs in the protein from Aquifex is increased by >90%. Melting point assessments are often employed in thermostability studies in order to examine the effect of structural changes. In this case, the corresponding change in melting temperature when B. subtilis to A. aeolicus was about 27°C. 2
Molecular dynamics calculations on a prototypical ion-pair model system have suggested that a sizeable energy barrier exists for the solvation of a salt bridge and that the height of this barrier increases with temperature. Interestingly, a similar barrier is not seen with isosteric hydrophobic groups. Thus, the heightened kinetic barrier towards protein unfolding is one of the mechanisms thermophiles can employ to stabilize their proteins and prevent them from denaturing.

The charged polar amino acid content is a genomic signature that can give strong indications to an organisms growth environment. The advantage of polar amino acids comes from the increased stability of coulombic interactions with increasing temperatures. Therefore, in most structures of hyperthermophilic proteins, the existence of long chains of ion pairs provide cooperative stabilization. 3 This finding implies the existence of global structural features associated with hyperthermostability common to thermophilic Bacteria and Achaea as described below.

The replacement of polar noncharged residues by charged ones constitutes a major stabilization mechanism in the proteins of hyperthermophilic organisms. Residue changes allow the stabilization of proteins through ion bonds. A stronger intramolecular interaction between the protein and itself decreases the effect of an intermolecular force such as heat. In other words, more heat is required to denature the protein if there are stronger intramolecular interactions taking place. The proteome analysis in amino acid classes indicated that hyperthermophilicity is characterized by a sharp increase of charged residues, Lys and Glu, at the expense of polar noncharged residues, mainly Gln (Figure 3). Figure 3A is a plot of the sum of the percentages of charged amino acids (Lys, Arg, Asp, Glu; CHA, blue), polar noncharged amino acids (Asn, Gln, Ser, Thr; POL, green), and of the difference of the two values (CH-POL, red). The mesophiles and hyperthermophiles are identified by MESO and HYPER, respectively. Figure 3B is a plot of the percentages of the various amino acids in mesophiles (blue) and hyperthermophiles (red). Figure 3C is a plot of the sum of percentages of the various amino acid classes in mesophiles (blue) and hyperthermophiles (red). A threshold is observed around 10% for extremeophiles Ch-Po values, while a higher limit of 5% characterizes mesophiles. 1Cambillau and Claverie suggest from this data that the difference between charged and polar noncharged amino acids (Ch-Po) is the best indicator of an organism’s lifestyle.1

The specific distribution of disulfide bonds observed across prokaryotic genomes suggests specialization in strategies used by organisms to stabilize their proteins. Trends in pairwise amino acid proximities were measure for proteins from 199 distinct prokaryotic genomes, and close cysteine-cysteine pairings were interpreted as likely specific disulfide bonds in these organisms.14 Thermophiles exhibited a pronounced bias in the spatial proximity of cysteine-cysteine residues, supporting a role for disulfide bonds in these organisms. The predicted disulfide abundance (expressed as a proximity score for cysteine-cysteine pairs) is shown in Figure 3 as a function of the maximum growth temperature of each organism. Here, a plot of log ratios of Disulfide richness is identified in thermophiles, both archaeal and bacterial. 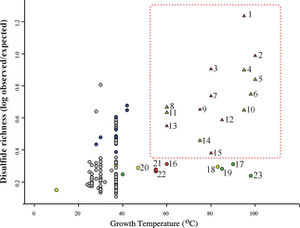 Figure 3. Correspondence of Growth Temperature and Disulfide Richness. Organisms are classified by color and symbol shape according to the following scheme: mesophiles that have been suggested to have extremophilic qualities (blue); mesophiles with no suggested extremophilic qualities (grey); sulfur-reducing bacteria and archaea (yellow); methanogenic bacteria and archaea (green), non-methanogenic/non-sulfur-reducing thermophiles (red); genomes that contain a PDO protein (triangle)l and genomes that do not contain a PDO protein (circle). Beeby et al. 2005.

In addition to thermophilic prokaryotes, certain other organisms appear to have measurably elevated degrees of disulfide bonding. These include some halophiles, alkalophiles, acidophiles, and radiation-tolerant organisms. This trend suggests that disulfide bonds might serve generally to stabilize proteins in a variety of extreme environments.

In terms of DNA, the denaturation of nucleic acids is the separation of a double strand into two single strands, which occurs when the hydrogen bonds between the strands are broken. Denaturation of an organisms genetic material renders it unfit and highly susceptible to malicious mutations. Unlike most organisms, thermophiles can survive and thrive at very high temperatures.

Hickey and Singer suggest that the large variations in the average genomic GC content between species are largely the result of bias mutation and repair pressures. Indeed, many highly thermophilic species, such as Pyrococcus abyssi and Aquifex aeolicus, have genomic GC contents of less than 50%, while some mesophiles - such as the human parasite Mycobacterium tuberculosis - have much higher GC contents in their genomes. This observation suggests that thermophiles have mechanisms other than increasing GC content for maintaining the double-stranded structure of their DNA at high temperatures.7

The employment of structural salt bridges, loop deletions, polar charged residues, and heightened GC content have all been observed to heighten protein or DNA stability under high temperatures. The increased intramolecular forces, like ion and hydrogen bonds, of thermophilic structures are keystone to their thermostability. Astrobiologist can use these structural motifs to hypothesize and investigate possible extraterrestrial life forms. Perhaps planets that have a similar hot environment, like those of deep-sea hydrothermal vents or hot springs, can harbor organisms similar to the thermophiles we see on Earth. Although it is important to take into account that extraterrestrial life may not employ the same mechanisms of genetic material, metabolic processes, or protein structure, the study of thermophilic organisms opens a window into the amazing mechanisms employed in order to live in extreme environments.

2 Karshikoff, Andrey, and Rudolf Ladenstein. "Ion pairs and the thermotolerance of proteins from hyperthermophiles: a ‘traffic rule’for hot roads." Trends in biochemical sciences 26.9 (2001): 550-557.

13 Haslbeck, Martin, Titus Franzmann, Daniel Weinfurtner, and Johannes Buchner. "Some like it hot: the structure and function of small heat-shock proteins." Nature structural & molecular biology 12, no. 10 (2005): 842-846.

Edited by (Paloma Medina), a student of Nora Sullivan in BIOL187S (Microbial Life) in The Keck Science Department of the Claremont Colleges Spring 2013.