The gold mines of South Africa host a number of unique microbial species that display resilience to extreme environments. This site hosts the deepest excavations in the world. These mines run over 2.5 miles below the Earth's surface, allowing a detailed exploration of subsurface sediments and microbes. While there is still much to discover in the subsurface, current findings show a high degree of archaeal diversity and one particular species of bacteria of interest.

Description of the Mines 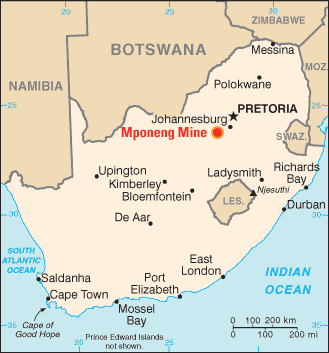 Mponeng Gold mine was the site where extremophile Desulforudis audaxviator was discovered [1]. Far below the surface, water runs through cracks in the bedrock. It was here that this unusual microbe was found. The environment this far below the surface is harsh; the temperature as high as 60 degrees Celsius can be seen as well as an environmental pH of 9.3.[2] Four other mines in South Africa were used to take stock of the Archaeal diversity: East and West Driefontein along with the Kloof Mines form a group of complexes on the West Rand. These West Rand mines have similar rock composition and stratigraphy. As one ventures deeper, Pretoria Group sandstone gives way to Transvaal dolomites and then moves into Ventersdorp Supergroup volcanic strata and Witwatersrand Supergroup quartzites and carbonaceous gold-bearing reef horizons. The fourth mine, Beatrix Mine, does not have dolomite and Ventersdorp sequences. Temperature gradients at these four sites varied but correlated to the amount of water flowing through the fractures along the dyke. 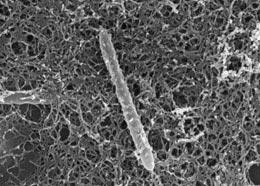 Figure 1: This Candidatus Desulforudis audaxviator bacterium displays a rod-like shape, and the endospore protein coat can be easily seen. The tail-like structure is called a flagellum, and allows the bacterium to move.

The geochemical, biological, and hydrological processes that are present in the mines of South Africa allow a unique archaeal community structure. Generally speaking, the mine water at all sites is acidic. The acidic water was found to host archaeal communities similar to SAGMCG 1 group, which is an archaeal group that thrives in the dolomite aquifer. The water samples obtained from the Beatrix and West Driefontein mines display similarities in this structure. Phylogenetic features such as rDNA sequences belonging to both SAGMEG 1 and SAGMEG 2 and high GC content indicates a shared thermophilic nature between the two communities. The sample of archaea obtained from Kloof Mine was found to be similar to Pyrococcus, which is a thermophilic archaeal species found in deep-sea vents. This is the first discovery of Pyrococcus-like archaea living outside of the marine environment.

The discovery of numerous novel archaea in the South African gold mines suggests the presence of a unique environment that allows certain thermophiles and hyperthermophiles to survive and thrive. Additional analysis of these habitats must take place in order to understand the interaction these archaeal communities have on one another. As for the Mponeng mine's sole organism, Candidatus Desulforudis audaxviator, there is little threat of extinction due to the stability of the mine. This means that future analysis can take place whenever the time is right.