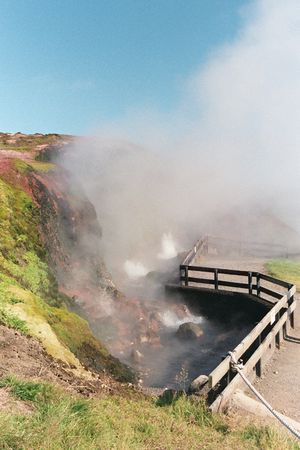 A hot spring in iceland called Deildartunguhver that is the highest flow hot spring in Europe. The heat is used to heat the towns Borgarnes and Akranes

Hot springs can be found all around the world and while there are many specific definitions, they can be generally be described as any spring that is heated geothermally1. Not only are these environment considered extreme in terms of temperature, but they can also be very extreme in regard to pH. This may seem like a habitat that is unfit for life, but there are many microbes that are able to utilize acidic hot springs in order to survive.

On a pH scale of 1 to 14, 1 being the most acidic and 14 being the most basic, hot springs can reach pH as low as 1.5, like in Pozzuoli, Italy2. In most springs, the acidity is the result of sulfide being oxidized by microbes3. 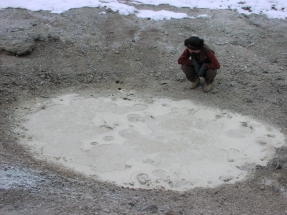 Acidic sulphur springs near Redondo Peak in New Mexico. The water comes from snow melting and in the dry season the pools become boiling mud or dry fumaroles3

Hot springs vary in temperature, some are at a temperature comfortable enough to be used as a sort of hot tub for both humans and animals while other reach temperatures of up to 100 °C (212 °F)4. The temperatures reached in hot springs is enough to kill many microbes. In fact, heat is frequently used as a method of sterilization13. Heat can denature proteins, therefore destroying the microbe. The heat increases kinetic energy, causing molecules to vibrate rapidly thus destroying the bonds. This process disrupts the structure of the protein which is what allows the protein to function14.

There are many new virus families that have been discovered in hot springs, some of these are Fuselloviridae, Lipothrixviridae, Rudiviridae, Guttaviridae, and Globuloviridae. These viruses all have unique morphologies and genomic qualities that have yet to be observed outside of the hot springs, and therefore were assigned to new families.

Electron micrographs of the Acidianus bottle-shaped virus. A- Particles are pointed toward the membrane of the host. B- Particles are attached to each other with thin filaments2.

The microbes most commonly found in acidic hot springs come from the domain archaea. They are able to survive in some of the most extreme environments on the planet7. The archaea that oxidize sulfur belong to the order Sulfolobales8. Some specific examples of those archaea that have been found in acidic hot springs are Sulfolobus and Sulfurisphaera.

Sulfur can be oxidized by some bacteria that can be defined as either aerobic lithotrophs or anaerobic phototrophs8. One particular genus of bacteria that is known to oxidize sulfur to sulfuric acid is Thiobacillus.

Sulfur is an element that is frequently found in hot springs; it is dissolved into the springs through the surrounding rocks and soil3. The most important microbial process that occurs in hot springs is the oxidation of sulfur, producing sulfuric acid.

When an element is oxidized, this means that it is losing electrons9. These electrons can then be used by the microbe to generate ATP, which is the energy that allows cells to grow and reproduce. Organisms that use inorganic substance as electron donors are referred to as lithotrophs. These can be either phototrophs or chemotrophs. The phototrophs use light energy to make chemical energy and chemotrophs use inorganic or organic substances15. The organisms found in hot springs are called chemolithotrophs because they gain energy and electrons from inorganic substances.

One recent study was investigating potential antimicrobial effects of acidic hot spring water on the species Staphylococcus aureus. These strains of S. Aureus were collected from patients with atopic dermatitis, more commonly known by the name eczema. The results showed significant decreases in the amount of S. Aureus cells that were able to survive in the acidic hot spring water. The conclusions reached was that some of the present ions and the low pH conditions allowed the water to act as a bactericidal agent10.


In New Zealand, stromatolites were found developing in several acidic hot springs. Small spicular, columnar and blade-shaped stromatolites are something frequently found in hot springs and geysers, however, they are most commonly found in neutral and alkaline springs. Recently stromatolites have been discovered forming in the acid-sulfate springs of Lake Rotokawa. When the mineral structure and biota found in these stromatolites was compared to those of neutral and alkaline waters there were many differences. This analysis can help us better describe ancient thermal deposits based on their mineralogy11.


More research done in a different area of New Zealand found microbes other than Sulfolobus in the acidic hot springs of Waiotapu for the first time. Some rod shaped, spherical and filamentous cells were observed in addition to Sulfolobus spheres. However, the attempts to culture the microbes were unsuccessful. Several analyses of the microbes determined a few known species and several unknown bacteria in the pools12.


One of these viruses, called Acidianus bottle-shaped virus, uses it’s shape to funnel it’s double stranded DNA into the archaeal genus Acidianus. While it is not clear what the exact virus-host relationship is in this example further studies are being conducted. This study strongly supports the idea that there are many morphologically different viruses that we have yet to discover, and that many may be surviving in extreme environments2.

9. “Oxidation and Reduction”. The Bodner Group: Purdue Department of Chemistry.

Edited by Maureen Barr, a student of Angela Kent at the University of Illinois at Urbana-Champaign.