A Microbial Biorealm page on the Agrobacterium radiobacter 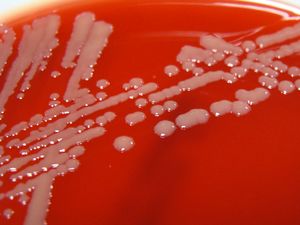 An isolation streak of A. radiobacter on blood horse agar. The bacteria was isolated from the vitreous humour of the right eye of a patient with endophthalmitis. Photo property of Nathan Reading and used solely for educational purposes.

Agrobacterium radiobacter is a gram negative bacillus found in soil containing organic material (rhizosphere). It is a saprophytic organism, meaning it uses dead plant material for nutrients.(1) A. radiobacter strain k84 is utilized for its competitive behavior with the closely related A. tumefaciens; the cause of crown gall disease in plants. A. radiobacter synthesizes and secretes a substance called agrocin 84, which blocks the ability of A tumefaciens to replicate its DNA, effectively halting its ability to reproduce.(2) The strain A. radiobacter J14 is useful in its ability to degrade Atrazine, an agricultural herbicide.(4)

It has been recognized as an opportunistic pathogen in humans, though is of relatively low virulence.(1) The bacteria’s presence in humans is thought to be nosocomial, meaning hospital-acquired. Cases of Agrobacterium infection occurred most frequently in conjunction with the presence of a catheter or lens implant. A. radiobacter has also been the cause of one case of psuedobacteremia, in which 15 blood samples were contaminated with water inhabited by A. radiobacter, further implicating that the bacteria is transmitted from the hospital to humans.(10)

The genome of A. radiobacter has been completely sequenced via the shotgun sequencing method. It contains 7.2 million base pairs with a G+C composition of 59.9%.(11) The genetic material is organized within one circular chromosome containing 4,005,130 base pairs, as well as four plasmids.

The five species of Agrobacterium are divided based on their pathogenicity towards plants. A. radiobacter is distinguished by being the only member of the genus that does not have pathogenic tendencies towards plants. This is a problematic method of categorization because the plasmids responsible for pathogenicity are easily transferrable amongst members of the genus.(8) An alternative classification system divides Agrobacterium into three biovariants based on the organization of their genetic material. Biovar I contains two chromosomes and two plasmids. Biovar III contain two chromosomes and five plasmids. Biovar II, to which A. radiobacter belongs, contains only one chromosome and four plasmids.(8)

The largest of A. radiobacter’s plasmids contains 2,650,913 base pairs; more than 33% of the organism’s total genetic material and more than the either of the other bivariant’s second chromosomes. However, because it does not contain genes that code for vital metabolic functions, it is still classified as a plasmid. It does share a significant number of genes with the other biovarients that are important, if not vital, to cell function. To distinguish its significance, the large plasmid is commonly referred to as a replicon. The replicon is known to contain at least one gene essential to cell survival. (8)

A. radiobacter was first isolated from soil in Australia (5). It is a rod-shaped, gram-negative organism that senses nutrients through chemotaxis, and moves towards them propelled by use of peritrichous flagella. A. radiobacter forms organized biofilms in the tree roots it colonizes by secreting a sticky polysaccharide cell envelope.(9) In lab strains, it forms round colonies.

A. radiobacter is a facultative aerobic heterotroph that is unable to carry out fermentation. The organism uses dead plant material in the rhizosphere, a distinct habitat influenced by the root systems of plants, as both its carbon and energy source. It has been lab cultured using glucose, fructose, lactose, maltose, dextrose, glycerol, glutamate and succinate as the sole source of carbon and energy. Under anaerobic conditions the organism is able to use nitrate as a terminal electron acceptor.

During oxidative respiration, A. radiobacter stores energy in the form of polyglucose molecules in microcompartments. They are not synthesized during anaerobic respiration which demonstrates the organism’s increased efficiency while using oxygen as its terminal electron acceptor. The polyglucose molecules can be used in a variety of biosynthetic pathways, including the reduction of chromate. This is a useful process because chromate is toxic to most organisms. (6) 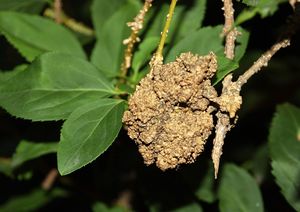 A forsythia infected with crown gall disease. By C-M (Own work) [GFDL (http://www.gnu.org/copyleft/fdl.html) or CC-BY-SA-3.0 (http://creativecommons.org/licenses/by-sa/3.0)], via Wikimedia Commons

A. radiobacter K84 is used to control two other members of its genus: A. tumefaciens and A. rhizogenes. The two organisms cause the diseases crown gall and hairy roots among many agriculturally useful plant species. The diseases involve a transfer of DNA called T-DNA into a host plant. The plant’s DNA is altered so that it synthesizes carbon compounds called opines that are then metabolized by the pathogenic bacteria. Bacteria were genetically engineering their food long before humans, and the mechanism by which pathogenic Agrobacterium transfer their DNA to plants has been copied for use in genetic engineering of crops. (4)

A. radiobacter K84 contains a plasmid (pAgk84) that codes for the synthesis of agrocin; an analogous molecule to the opines produced by infected plants.(5) Agrocin blocks the synthesis of enzyme T-RNA synthetase (LeuRS) which is vital to protein manufacturing and thus cell viability. As a biocontrol, agrocin is particularly effective because the genetic material that codes for the production of pathogenic T-DNA in A. tumefaciens and A. rhizogenes also codes for the production of the transfer proteins that import opines, meaning that the species that cause the disease are targeted specifically and effectively. (2,5)

Though A. radiobacter is classified by its benevolent relationship with plants, it has recently been recognized as an opportunistic pathogen among humans. Cases of A. radiobacter infection have been discovered in people with compromised immune systems (cancer or HIV patients) suggesting it is of low virulence. It is susceptible to a number of antibiotics including third-generation cephalosporins, beta-lactams, carbapenems, amikacin, ciprofloxacin, meropenem, and co-trimoxazole.(1) Infection most frequently accompanies the presence of foreign material such as a catheter or lens implant indicating that that bacteria’s introduction to the body is nosocomial. More evidence that A. radiobacter infection is hospital-acquired comes from at least one known case of pseudobacteremia. Pseudobacteremia is a false positive based on bacterial contamination of a sample.(10)