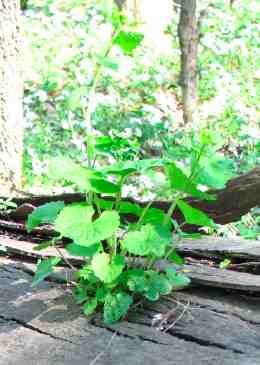 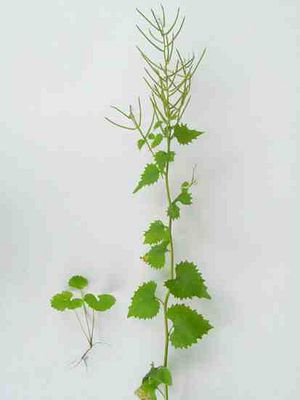 For at least two decades, garlic mustard, Alliaria petiolata, (Bieb.) Cavara & Grande) a European biennial herb, has been a serious invader of natural areas and woodland communities of North America [20, 21]. Garlic mustard seeds germinate in early spring, and remain as an evergreen basal rosette during the first year; densities of up to up to 5,080 seedlings per square meter have been recorded [22; 23]. During the second year, rosettes bolt between mid-April and mid-May and may occur in densities as high as 303 plants per square meter [22]. The flowers begin anthesis in early spring, set seed in June, and senesce by mid-late July [22, 23]. Seeds germinate after a period of at least 14 weeks of cold stratification at temperatures from 1 degree Celsius (°C) to 10°C [24]. In the first spring following production, 70% of seeds germinate but may remain viable for up to 10 years[24, 25].

Invasive species can and do effect soil microbial communities. These interactions in areas of low diversity can be classified as competitive dominance, inhibition and positive feedback[1]. Monotypical stands formed by invasive species sometimes have symbiotic relationships novel to the invaded areas. These novel mutualisms could increase the competitiveness and niche-space of invasive species [7], a form of the ‘empty niche’ hypothesis [8]. The ‘degraded mutualist hypothesis’ proposes that some invasive plants will inhibit native symbiotic communities, indirectly reducing native plant fitness [9, 10]. Alliaria petiolata is a nonmycorrhizal species and may follow the 'degraded mutualist hypothesis.' 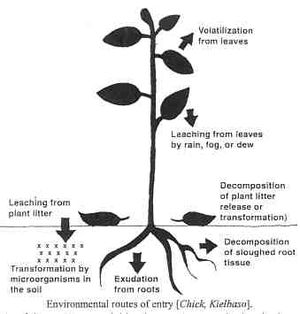 Allelopathy is the suppression of germination or growth of neighboring plants by the release of toxic secondary chemical compounds. These secondary metabolites are leached, exuded or volatilized into the environment from the plant [11] and may act as act as novel weapons to suppress mycorrhizal fungi [12, 13, 14, 15], inhibit germination [16,17, 18, 19] and decrease survival of native mycorrhizal plants [13].

At least 80% of the world's plants form mycorrhizalassocations[32]. Arbuscular mycorrhizal fungi (AMF), phylum Glomermycota and ectomycorrhizal fungi (EMF), phylums Basidiomycota, Ascomycota, Zygomycota are soil mutualists with resident plant roots acting as an extension of the root system. Mycorrhizal associations lead to protection of the plant from soil pathogens [33] and an enhanced tolerance to drought [34].

Alliaria petiolata has been shown to inhibit plant growth and mycorrizal fungi. This effect is most likely due to secondary metabolities exudated by this plant. Glucosinolates, alliarinosides, flavoinoid glycosides and cyanide all have been shown to be part of the suite of chemicals produced by this plant, with glucosinolates being more present in belowground tissues [17, 26, 27]. Interestingly, compounds from glucosinolates predominately degrade to the secondary metabolites, allyl isothiocyanate and benzl isothiocyanate, both shown to be inhibitory to fungi [28].

There is growing interest in invasion ecology as to the effect of invasive plants species on mycorrhizae in soil and how these invasive plants can affect native plants and diversity of mycorrhiza [29]. Native tree species Acer saccharum, Acer rubra and Fraxinus americana all showed less colonization of roots by AMF in soil and slower growth in soil with a history of Alliaria petiolata suggesting the methods of suppression is microbially-mediated [10]. Extracts inhibited the growth of EMF and led to changes in EMF communities in invaded soils, with strongest inhibition within 10 cm of patches [14]. Other studies have shown while no effect was seen on total root length colonization on herbaceous plants with Alliaria petiolata presence, there was some effect of Alliaria presence on mycorrizal community structure with the plant Maianthemum racemosum [29]. Overall mycorrhizal inoculum potential of soil (MIP) was tested in another study and found a significant negative correlation between the density of Alliaria petiolata in quadrats and MIP[35]. Understanding if and how the mycorrhizal association influences plant invasion may be a key aspect of the ecology and management of invasive plant species, as well as the conservation biology of native habitats [30]. Further study of volatiles released by this plant and the effect on mycorrhizal associations is needed [17].

AMF species have been used to test spore germination inhibition to understand biological interactions. These species include Gigaspora rosea, unidentified species of Glomus and Acaulospora and specifically Glomus clarum in chemical bioassays. For each of these species, allelochemical exposure from Alliaria suppressed spore germination [16,37,38].

Recently, research to understand long term effects of Alliaria petiolata on microbial communities, including AMF communities, has shown over time an increase in operational taxonomic units as Alliaria petiolata evolves to produce less allelopathic exudates [31]. This suggest impacts of particular invasive species may change over time because of changes both in the invader and the invaded community which will implications for how invasive species are studied and managed.

Another area of research has shown exudates inhibit the germination in the North American species Geum laciniatum [19] and inhibited germination of Impatiens pallida was seen when seeds were exposed to levels of extract expected in the field [18]. This suggests the strongest allelopathic effects occur during seed and spore germination and presymbiosis growth[18]. The affect of garlic mustard exudates on native plant seed germination is needed to understand how recruitment of native species composition is being altered by this presymbiosis exposure and is currently being researched.

Finally, community feedbacks vary within as well as between species, and a variation could help the spread and impact of which should help prioritize management efforts. Research is needed for these species specific and broad associations are needed [31,36].

[28] Gamliel, A. and J.J. Stapleton. 1993a. Characterization of antifungal volatile compounds evolved from solarized soil amended with cabbage residues. Phytopathology 83:899-905.