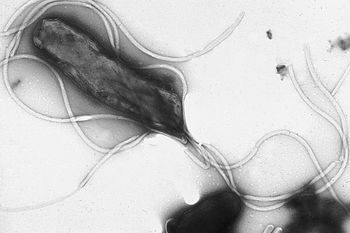 Helicobacter pylori is a Gram-negative bacteria that infects nearly half of the world's population, and causes many gastric diseases.10 It is known to commonly cause gastric inflammation (chronic gastritis), but if left untreated, or if treatment is unsuccessful, it can lead to ulcers, and even stomach cancer.10 Current antibiotic treatments are quickly becoming ineffective, due to resistance of H. pylori to commonly prescribed medicines like clarithromycin, metronidazole, and amoxicillin.1 New, alternative treatments are in high-demand, so that H. pylori infections can be eradicated quickly and successfully, to prevent ulcer and cancer formation.

Recently, scientists have been interested in two possible treatments for gastric inflammation by H. pylori: probiotic cultures and liposomal linolenic acid (lipoLLA). Probiotic bacteria have been shown to inhibit H. pylori by binding to recognition receptors of gastric epithelial cells, controlling immune responses.9 LipoLLA, a free fatty acid, has also been tested as a bactericide, and has been proven to reduce colonization and gastric inflammation by counteracting the effects of H. pylori on inflammatory responses.9 Both probiotics and lipoLLA appear promising as alternative treatments for antibiotic-resistant Helicobacter pylori. 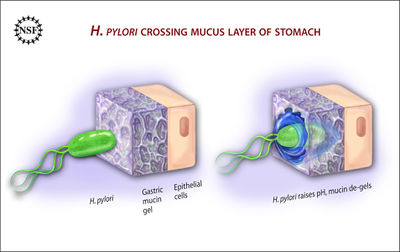 H. pylori is a Gram-negative bacteria, with a helix shape.2 It infects the stomach by burrowing through the mucus lining, using its flagella, and making its way into the more pH-neutral layer of epithelial cells, where it can live for decades.10 From here, H. pylori colonization of the stomach causes inflammation by a few different pathways. Most commonly, the bacteria trigger an immune response by communicating with NF-κB, a protein complex that regulates immune system molecules.10 H. pylori gets NF-κB to up-regulate cytokines (specifically, interleukins), causing inflammation.10 The CagA and VacA virulence factors of H. pylori play a part in this mechanism, damaging the communication between gastric epithelial cells and surrounding immune cells.10

The most common form of treatment for gastric inflammation by H. pylori infection is a triple therapy, consisting of two antibiotics and a proton pump inhibitor (to reduce stomach acid production, and allow healing).5 Clarithromycin, and either amoxicillin or metronidazole, are the main antibiotics used to fight H. pylori infections, but antibiotic resistant strains are becoming more and more common, and these drugs are no longer fully effective in eliminating infection.8 Primary resistance of H. pylori to clarithromycin is a major cause of treatment failure, as point mutations in the bacteria cause decreased binding of the antibiotic to the 50S ribosomal subunit. 1 If clarithromycin cannot bind, it cannot do its job to stop protein synthesis by disrupting translation, and therefore cannot stop bacterial growth. Metronidazole's mechanism of action, as an antibiotic, is not fully understood, but H. pylori resistance to metronidazole is caused by a gene mutation, as well.1 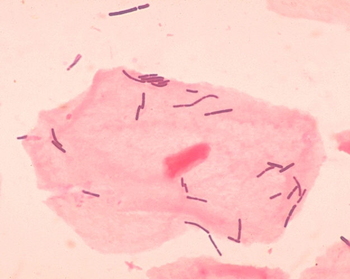 Lactobacilli (gram-positive rods) near a vaginal squamous epithelial cell, where they are commonly found. [3]

Probiotics are living microbial species that may have positive effects on overall health.4 , 6 Lactobacillus species are the most commonly-used probiotic microorganisms, as they can tolerate extremely acidic conditions (low pH), and they are the most studied.3 ,4 , 6 The effects of Lactobacillus species on H. pylori have been studied several times, and it is possible that they compete directly with H. pylori by inhibiting binding and/or by producing antimicrobial molecules, like lactic acid.6

Lactobacillus reuteri has antibiotic resistance, and has been shown to reduce side effects of the triple therapy antibiotic treatment.6 It also inhibits H. pylori, making it a very plausible candidate for an alternative treatment.6 It does so by either secreting inhibiting products, or by directly competing with H. pylori in biding sites on gastric epithelial cells.4

Based on results of several studies, probiotics could be a very cost-effective, easily-accessible alternative solution to reducing colonization and treating gastric inflammation by H. pylori.4

Free fatty acids (FFAs) are fatty acids that are not attached to other molecules, and come from the breakdown of triglycerides (wiki). FFAs, like lauric acid, myristoleic acid, linoleic acid, and linolenic acid, have been tested for antibacterial behaviors against many bacteria, including H. pylori.5

FFAs are of interest to researchers, as alternative therapies, because liposome delivery of treatment is a plausible approach to treat gastric inflammation by H. pylori infection.9 Liposomes can easily cross the phospholipid layers of bacterial cell membranes, like the ones in Gram-negative H. pylori, to deliver the drug.9 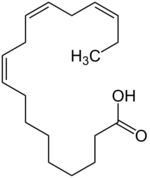 LipoLLA has been used as a model FFA in some studies, to test for possible antibacterial abilities against H. pylori.5 , 9 LipoLLA was shown to inhibit both spiral and coccoid forms of laboratory strains of H. pylori, and is probably more effective than some antibiotic treatments, as compared to amoxicillin, which can only kill spiral forms of H. pylori.5 It also killed all strains, regardless of their resistance to metronidazole, and H. pylori drug resistance did not occur when LipoLLA was administered.5 This same study, on the effectiveness of LipoLLA as a bactericide, saw a rapid decrease in viable bacteria at their calculated "minimum bactericidal cocnentration" (MBC) of LLA, suggesting that LipoLLA could kill H. pylori by some sort of lysis mechanism.5

LipoLLA was found to fuse with H. pylori, a method of action that can disrupt the integrity of the bacterial membrane.9 In vivo and in vitro, the occurrence of the LipoLLA-H. pylori fusion mechanism is a great example of how FFAs can be used to combat infections causing gastric inflammation.9

Caveats of FFAs as Alternative Treatments

In terms of actually using FFAs, in vivo, as alternative treatments, there are still many obstacles to overcome before an effective medicine can be produced, on the large-scale. There is a large issue of solubility of FFAs that are actually effective against H. pylori.9 The pH of the stomach makes them less soluble after oral administration, and they become ineffective.9 They are also at risk to be oxidized, esterified, and further altered, in vivo, which reduces their effectiveness as a bactericide.9

For FFAs to be possible alternative treatments, then, new administration methods/packaging formulations must be created.5 Nanotechnology is a promising approach, where nanosized liposomes, containing and FFA, are used.5 , 9 They can be directly incorporated into the hydrophilic membranes (phospholipids) with high yield and efficiency, without being degraded, in vivo.5 Nanoparticle liposomal packaging, then, seems to be a plausible solution to the degradation issue.

There are many other natural treatments being researched for bactericidal activity, like those found in plant extracts and foods that are commonly accessible in most countries. Some of these include flavonoid extracts, acetone and methanol extracts, honey, turmeric, and other foods, like broccoli & cauliflower, garlic, red wine, and green tea. Many of them contain compounds like lactoferrin, catechin, and polyphenol, that have been found to have anti-H. pylori activity. They may not be as efficient as antibiotic treatments, or newly-researched alternative treatments, like probiotics and FFAs, but they could have some antibacterial effects, and help ease the process of eradicating H. pylori infections causing gastric inflammation.

An article by Takeuchi, et. al. looks at many natural food and products that have anti-H. pylori potential, and describes the stages of research they are in, and the active components in each that could give them their infection-fighting qualities:

7. Patel, A., Shah, N., Prajapati, J.B. 2014. Clinical application of probiotics in the treatment of Helicobacter pylori infection- a brief review. Journal of Microbiology, Immunology and Infection 47:429-437. [12]

Edited by Elizabeth Augustine, a student of Nora Sullivan in BIOL168L (Microbiology) in The Keck Science Department of the Claremont Colleges Spring 2015.