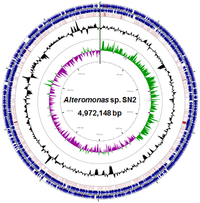 The genus Alteromonas was originally defined on 'morphological,physiological,and nutritional' grounds by Baumann et al. The defining features of that original clade were gram-negative heterotrophic bacteria possessing a polar flagellum and GC content between 42.3 and 48%. Through genomic sequencing many original members were reassigned and the genus evolved to include many aerobic, non-pigmented, motile heterotrophs that are abundant in the world’s oceans and generally classified as r-strategists (3,6). Members of the genus are curved rods and have a characteristic single polar flagellum. The genus has grown to 11 named species, as well as several additional unclassified strains (2). The strain Alteromonas SN2 was originally isolated in the coastal sand flats of South Korea after an oil spill in 2007 as a bacteria capable of degrading aromatic carbon rings introduced through an oil spill(4).

Most Alteromonas strains have been isolated from various ocean waters around the world(4). However Alteromonas SN2 has only been observed and studied in the coastal sands of South Korea. In pure culture and a community environment A. SN2 is capable of degrading aromatic carbon compounds, specifically naphthalene, phenanthrene, anthracene, and pyrene (4). Significantly, it can grow on these substrates in seawater without the addition of extra nutrients. This autonomy combined with being an r-strategist makes A. SN2 primly adapted for degrading the aromatic carbon compounds released in large amounts from oil spills. Experiments done by Jin et al. showed that A. SN2 was one of only two organisms expressing genes that can degrade such aromatic compounds in the oil-contaminated sands of South Korea(3). This indicates that these organisms play a major role in the breakdown of such compounds from the environment after oil spills. Experiments by Math et al. have shown that A. SN2 bacteria are capable of growth at the lower and more variable temperatures that coastal flats experience compared to the open ocean habitats of other members of the genus.

One 4,972,148 BP circular chromosome with 43.51% GC content (5) and 87.99% coding density (3). Twenty-one separate dioxygenases that take part in the heterotrophic metabolism are present, more than other Alteromonas species. The genes required to perform the gentisate biochemical pathway for the breakdown of naphthalene are also present. The A. SN2 genome also shows more similarity than other Alteromonas species to cold-water organisms, presumably an adaptation to the low temperatures that occur yearly in South Korea’s sand-flats. The genome contains fifteen genetic islands showing evidence of horizontal gene transfer, phage attacks as well as transposable elements(5). Interestingly, some of these islands show evidence of being descended from land bacteria as a result of living at the terrestrial-marine divide(5).