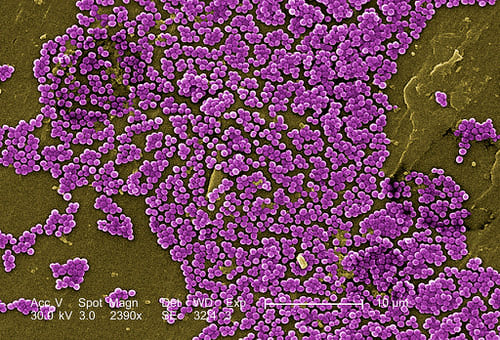 Bacteria have been around far longer than humans and know how to survive very well. There are many strains of Staphyloccus aureus and some have genetic advantages to fighting off antibiotic attacks. When less advantaged strains succumb to antibiotics, the naturally advantaged strains could become harder to kill. Eventually, the strain can become resistant to antibiotics. Over time, Staphyloccus aureus strains can carry resistant genes and further mutations could add to their ability to survive. The principal backup drug for treating serious MRSA infections was vancomycin. However, the first vancomycin resistant strain was found in Japan in 1996. Furthermore, strains that manage to carry two or three resistance genes will have an even stronger resistance to many different antibiotics.

The symptoms of MRSA are fairly uniform but vary depending on the location of the infection. The infection will often originate in a small cut or wound. Typically, it is a boil-like wound found on the skin. It is often red, swollen, filled with puss and very painful. It is possible that the infection may spread to other areas of the body and cause other complications. If it reaches the lungs it may cause pneumonia. It may also enter the blood stream (bacteremia) and affect the liver and kidneys. This is very serious. When this happens the infected patient may exhibit many problems separate from the initial boil on the skin. They may show signs of a high fever, shortness of breath, low blood pressure, joint pains, cough, and fatigue. A blood test is often necessary to be sure that these are symptoms of MRSA and not an unrelated health issue.

In order to diagnose MRSA, a sample in the form of a tissue sample or nasal secretion from the site is sent to a microbiology lab . If Staphylococcus aureus is found, further testing is required to determine what antibiotic would be effective. The process of testing involves placing a sample in a dish to encourage growth, a process that takes about 48 hours. New tests are becoming faster and can work in just a few hours instead of days.

MRSA, as its name suggests is resistant to methicillin but there are still effective antibiotics used to combat it. By identifying what specific strain the MRSA is, doctors are then able to determine what specific antibiotics to use. These antibiotics may be administered via I.V, topical creams or pills. It is imperative that the patient takes the full dosage of medication in order to fully kill the MRSA in order to prevent more resistant bacteria from re-infecting the patient. In the past few years there have been a number of FDA approved medications that have become available. One of these new drugs is known as Teflaro. Teflaro was created to treat individuals with community-acquired bacterial pneumonia (CAPB) and acute bacterial skin and skin structure infections (ABSSSI). Compared to its competitors, Teflaro reduced CAPB and ABSSSI symptoms much more effectively and safely. The most common side effect was diarrhea, nausea and rashes.

The problem of MRSA initially appeared in hospitals. Patients can naturally have MRSA on their skin, nose, and/or throat without harm. However, these patients can develop infections if MRSA spreads from a benign area to a wound. These wounds can come from abrasions, cuts, indwelling catheters and surgical incisions that allow a place for MRSA to gain access to the body. These patients can then spread MRSA to other patients, through a third party such as a nurse. Some strains of MRSA are very successful at spreading between patients and hospitals. These strains are called epidemic MRSA (EMRSA). In the 1990s, hospitals in the UK experienced an increase in infections caused by MRSA due to the spread of two new strains of EMRSA dubbed, EMRSA-15 and EMRSA-16. These strains still cause many cases of MRSA sepsis.

Community acquired MRSA seems to have developed apart from MRSA found in hospitals. MRSA found in the community causes infections in healthy people who are not at the same risk as hospital patients. A factor that could explain this is that community strains of MRSA produce a toxin called the panton-valentine leucocidin (PVL) that increases the strain’s ability to cause infection. Advantageously, community acquired MRSA frequently is susceptible to other non-penicillin antibiotics.

Many strains of MRSA exist and continue to be discovered. The following are just two examples.

A MRSA strain called LA-ST398 is associated with livestock is found in Europe in people that come in contact with swine and livestock (NIH). This strain does not transmit well via humans. A variation on LA-ST398, ST398-NM, which effects skin and soft tissue has come to the forefront as a cause of infection in many countries such as the United States, Canada and China (NIH). This strain, unlike the original, does transmit person to person. This contains “human specific immune-invasion genes” (NIH). The new strain threatens to become methicillin resistant.

The strain of MRSA called USA300 carries genes for alpha toxins and phenol soluble modulins (PSMs), which can trigger septic shock (NIH). Its forefather USA500, and the two are names as more destructive than usual strains of MRSA. These strains killed 80% of immune cells, as opposed to around 10% for other strains tested. While the strains are very similar, USA300 is more prevalent in community settings. Both strains are very antibiotic resistant and are often deadly.

The most important step for public officials is to keep a watchful eye and be on the look out for cases of MRSA in the community. By keeping surveillance, public health officials are able to educate patients and physicians. This type of surveillance will allow those who have MRSA to receive proper treatment. If public health officials do a good job looking out for MRSA it will cut down on the spread of the infection amongst individuals in a community, for example a football team. When the infection spreads amongst individuals in a community, public health officials must decide whether or not to investigate the incident and need to “ weigh the number and clustering of time and space of cases, the setting of the cluster, the severity of illness, the presence of ongoing transmission, and the likelihood that an intervention could be successfully implemented”. (Cohen, 65) It is essential that patients and community members report incidence and seek medical help at first signs of a potential infection.

Medical providers and infection control personnel have a huge responsibility in the prevention of MRSA. The most important responsibility is educating the community and patients about the infection and ways to limit the spread of MRSA. These members need to seek medical help once skin infection arises, as self-care often results in an outbreak and can be detrimental to both the patient and those in the community. Once a patient suspects having an infection it is crucial that it is treated properly. To begin, patients with the infections should be isolated and all in contact should wear proper gloves and gowns to limit the spread of the infection. A 1996 study done by Vandenbroucke-Grauls found that there are a very low proportion of S. aureus infections caused by MRSA in the Netherlands because they have intensive surveillance and patient isolation techniques. It also can’t be emphasized enough how important hand washing is to limit the spread of MRSA. As far as treatment goes, it is crucial that antimicrobials are chosen appropriately to eliminate the chance of resistance. When making this decision, doctors should consider “ local antimicrobial susceptibility patterns”(Cohen, 65). If a community outbreak occurs it is likely that personal would need to consider decolonization. Decolonization is the removal of MRSA. This technique is used to help reduce the risk of spreading the germs to others in the community. While decolonization isn’t appropriate in all cases, if it is recommended there are usually two parts to the treatment. The first is rubbing ointment into each of your nostrils for a recommended period of time. The second is showering or bathing with a special soap for a period of time while simultaneously using the nasal ointment. Other medications may also be used, but the above two methods are most common with decolonization. It is important that hospitals maintain a clean environment and that garments and all hospital items are properly cleaned and disinfected.

Ingraham, John L. March of the Microbes: Sighting the Unseen. Cambridge: Belknap of Harvard UP, 2010. Print.