Antibiotics and the Human Gut Microbiota 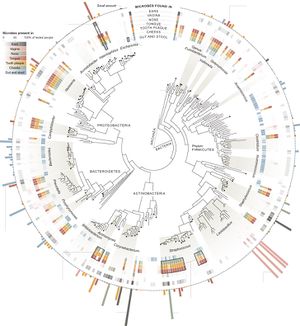 Figure 1. Phylogentic tree representing the inhabitants of the human microbiome of 242 healthy individuals who were surveyed for two years. Originally created by Curtis Huttenhower and Nicola Segata at the Harvard School of Public Health for the National Institutes of Health Human Microbiome Project. Obtained from New York Times [1]

Antibiotics make up a class of molecules whose purpose is to inhibit the growth of or kill harmful bacteria. They are produced by a wide variety of microbes as a means of competing with and defending themselves from nearby bacteria. Antibiotics are incredibly important to human health, as they are the primary treatment method for bacterial infections [1][2]. One aspect of antibiotic treatment that receives much less focus than its effect on invading pathogens is its impact on the human microbiota. A microbiome is a population that is defined by every microbe present on and/or within a certain part of an organism. Humans have an incredibly diverse microbiome (Figure 1) that contributes to the physiological processes of the host organism in many different ways (Figure 3) [3]. Although antibiotics are incredibly useful in fighting bacterial infections, they often alter the human gut microbiome in ways that prove detrimental to one's health. 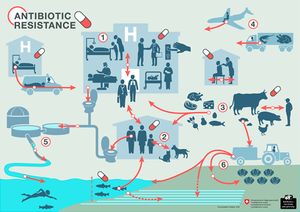 
Effect of Antibiotic Exposure on the Human Microbiota 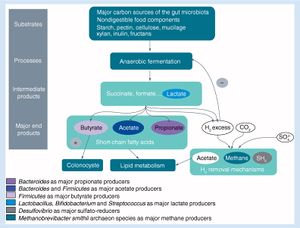 Figure 3.Overview of microbial carbohydrate fermentation: one of the important processes performed by the inhabitants of the human gut. Featured in The relationship between gut microbiota and weight gain in humans (Angelakis et al. 2011) [3]

Due to the prevalence of antibiotic use throughout the world, the human microbiome is often exposed to excessive amounts of these antibacterial agents [8]. Although antibiotics very effectively assist in the removal of harmful bacteria, they can also have detrimental effects on the gut microbiome. The most immediate of these effects is seen in the stress placed on the gut microbiome’s inhabitants, increasing expression of genes related to stress response, antibiotic resistance, and phage induction [9]. Bacterial fitness is altered in the presence of this stress, a change that tends to decrease bacterial diversity, richness and evenness within the gut; this disturbance is known as dysbiosis [8]. Although the microbiome is generally able to return to a composition that is similar to that of pretreatment conditions (one study found this to occur about four weeks after a five day ciprofloxacin treatment, although some taxa failed to recover until 6 months after treatment [10]), some alterations to the microbiome have been shown to persist over a number of months [11][12]. It was also found that when exposed to targeted antibiotics, certain subpopulations that are not directly affected by the antibiotic can still experience a reduction in population size [13]. This phenomenon is likely due to aspects of interdependence and/or competition between bacteria within the gut microbiome. 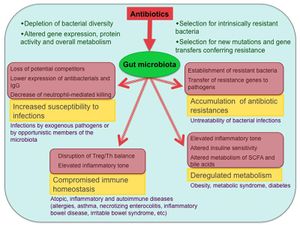 Figure 4. Effects of antibiotics on the gut microbiota. Mechanisms by which the change occurs are in the pink boxes; the results of the change are in the yellow boxes; the associated diseases are written in purple lettering. Featured in Antibiotics and the Human Gut Microbiome: Dysbioses and Accumulation of Resistances (Francino 2016) [4]

Antibiotic treatment and the resulting dysbiosis has been associated with a number of detrimental consequences. Although it is well known that antibiotic treatment leads to the selection for antibiotic resistance in pathogenic bacteria, this same type of selection occurs within the native inhabitants of the microbiome. Relatively high levels of antibiotic resistance genes have been shown to persist within the human gut microbiome for up to four years after antibiotic withdrawal [14]. This is especially concerning when considering that such genes have been found to have experienced lateral transfer between distantly related bacterial species [15], allowing the gut microbiome to act as a kind of storehouse for antibiotic resistance genes that can theoretically be accessed by dangerous bacteria during future infections [8]. A more immediate concern following antibiotic treatment is an increased vulnerability to infection. Both the reduction in diversity of the gut microbiome and its domination by antibiotic resistant strains of certain bacteria have been linked to dangerous post-treatment infections. For example, antibiotic treated mice have shown increased susceptibility to Clostridium difficile-induced Colitis [16] and bloodstream infection by vancomycin-resistant Enterococcus [17]. Early life dysbiosis resulting from antibiotic exposure has also been associated with an impaired immune response- leading to the development or enhancement of allergies, childhood asthma [18], and various inflammatory disorders such as late onset sepsis [19] and irritable bowel syndrome [20]. Treatment with antibiotics has been associated with increased weight gain in humans [21] and an increased risk of obesity in mice [22].

There are many proposed methods of addressing these issues without full withdrawal from antibiotic use. Within the context of human treatment, probiotics show promise in being able to stabilize the microbiome and supplement the deficits produced by dysbiosis, such as in the case of certain streptomycin treated mice [23]. Additionally, the intake of specific ligands can signal bacterial gene expression that inhibits growth of other bacteria that tend to dominate the microbiome during and after treatment [24]. Synthetic medicinal compounds also show promise in being able to reduce the side effects of antibiotics without reducing their effectiveness, such as the DAV132 product created by Jean de Gunzberg and his research team to remove free moxifloxacin from the gut [25]. Otherwise, limiting antibiotic use wherever possible will significantly reduce human contact and thus stifle the negative effects of overexposure [26].

The human gut microbiome plays an incredibly important role in the proper functioning of many physiological processes, most notably the human metabolism and immune response. Thus, the alteration of its composition that often accompanies exposure to antibiotics can aid in the development of various ailments, such as obesity and allergies, and reduce the effectiveness of one's immune system (Figure 4). Selection for antibiotic resistance in both pathogenic invading bacteria and native populations leads to the development and prevalence of fairly stable antibiotic resistance genes within the gut microbiota; this could allow future invaders to gain resistance through horizontal gene transfer. The wide range of uses for antibiotics means that humans are often overexposed to them. Treatment options such as probiotics can work to counteract the negative effects of antibiotic exposure, but many issues surrounding this topic can only be addressed by promoting a more efficient and conservative use of antibiotics.