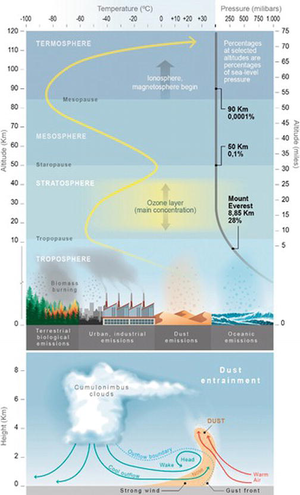 Diagram showing the layers of the atmosphere and the conditions present at each height, as well as sources of atmospheric cells. Figure from Aguilera et al.

The atmosphere, despite lacking a constant medium for organisms to live on, contains many microbes that live in it. Microbes enter the atmosphere as soil is lifted from the surface by winds, bringing the microbes that live in that soil into the atmosphere as well.[1] While previously these microbes were thought to be exclusively dormant, there is a growing body of work demonstrating atmospheric microbes that have an active metabolism.[2] While studying these organisms remains difficult due to the lack of a standardized method of capturing and culturing them,[1] these organisms are researched for their interactions with the terrestrial biosphere, their potential role as condensation nuclei, and as a possible model for extraterrestrial life.

The Environment of the Atmosphere 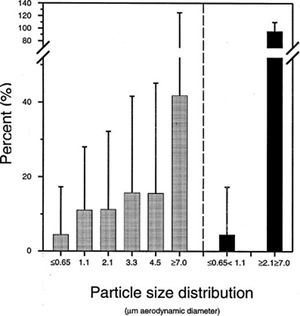 Unlike other habitats, the atmosphere is not the sole abode of any organism, with all of the microbes in the atmosphere also existing in a terrestrial or oceanic environment. Either natural forces such as wind or human pollution can send these microorganisms into the atmosphere.[3] The atmosphere itself is vast, with several physical layers that extend up to space that present extremes in temperature, pressure, and UV radiation.[4] Bacteria generally arrive in the atmosphere on relatively large particles, since they cling better to these larger particles that form roundish shapes that evaporate easier.[3] This is a rapidly emerging field of research, with much still to be learned. In the past, researchers assumed that the only microbial life in the atmosphere consisted of dormant spores. As studies demonstrate that they can metabolize the organic matter that is trapped in evaporated water droplet ,[2] the need for research into these effects grows.

Microbial Ecology of the Atmosphere

The atmosphere, despite having a volume larger than any other habitat, contains very few microbes. The troposphere, the layer of the atmosphere closest to the surface, has fewer than a billionth of the number of cells in terrestrial habitats.[1] Simulations project the distribution of airborne microbes across the world based on wind patterns, and show that the density varies greatly. Because of the low density and the difficulty in culturing airborne microbes, the diversity of these organisms is difficult to grasp. There is a clear variation in species by altitude. 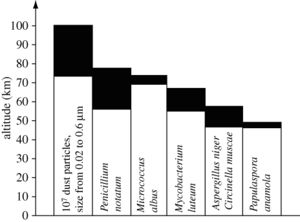 Chart showing the microbes isolated at different altitudes. The shaded portion indicates the altitude in which they have been cultured, while the white shows the altitude they were found at in dust. From Womack et al.

Additionally, airborne microbe transport is a major component in spreading diversity of microbes, but the microbes carried each dust storm varies in such an immense manner that there are no clear trends in diversity in a particular storm, but the overall diversity is quite high in a dust storm compared to the ambient composition. [5] While the factors behind the diversity of microbes in the air, they are thought to include the land-use patterns of the source area and wind speeds, with higher wind creating more diversity.[6] Most of the organisms in the atmosphere are of the domains bacteria, with some eukaryotes (mainly fungal spores and yeast) and an unknown amount of archaea.[1] The fungal spores include Aspergillus, Nigrospora, Arthrinium, and Curvularia, while the bacteria Firmicutes, Proteobacteria, Actinobacteria, and Bacteriodetes. Other Bacteria release spores into the atmosphere, such as Bacillus and Streptococcus.[1]

Microbes in the atmosphere appear to act as condensation nuclei.[2] This occurs as certain species of bacteria act as catalysts for the formation of ice, which then follow the normal process for cloud formation. All bacteria that can form ice use the same protein called the Ice+ protein, which is active at temperatures of 2 degrees celsius or less generally.[7] Proteobacteria especially have a role in cloud formation, and bacteria in general make up a higher fraction of particles in the upper atmosphere, indicating that their role in cloud formation may be much more significant than previously believed.[8] 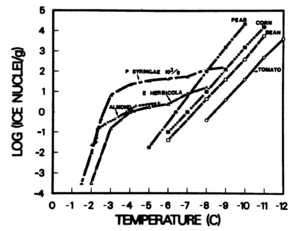 Chart showing the number of ice nuclei formed on a plant when uncolonized and colonized with ice-forming bacteria. Figure from Gurian-Sherman and Lindlow

A Model for Extraterrestrial Life?

At least two studies have proposed examining eukaryotic microbes in the atmosphere as models for extraterrestrial life. By exposing extremophilic yeasts to high altitudes, the low pressure, high UV, and low temperatures, researchers can match the conditions found on Mars. Researchers doing this found that the strains N. Friedmannii and Exophelia were good models for life on Mars.[4]

Chart showing the survival of different organisms based on exposure to altitude and atmospheric conditions from Pulschen et al.'s study on extreomphilic yeast surival. The N. Friedmanii yeast survived quite well.

Another study of other extremophilic yeasts also highlights the potential of these yeasts as models for extraterrestrial life, by first isolating yeasts in the Atacama desert at altitude that were the first yeast discovered in that desert, and found them to have high survivability at high and low temperature, as well as high UV levels.[9] These yeasts demonstrate that eukaryotes can survive in the atmosphere and in extreme environments, and signal that further research into these airborne eukaryotes is needed.

Key Microbes of the Atmosphere

Due to the varied conditions worldwide that contribute to its diversity, there are no clear microbes either by species or phyla that dominate in the atmosphere. Bacteria in general dominate, but the field remains open for further research to better answer this question.

The microbiology of the atmosphere remains deeply understudied and is ripe for further research to understand the role it plays in spreading species and other exchanges with the terrestial biosphere.