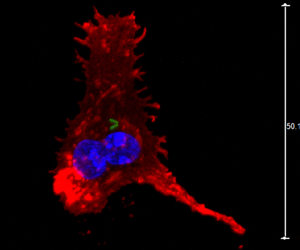 Figure 1. Image of a dendritic cell after ingesting a small amount of the BCG vaccine. Image: Institute for Animal Health http://www.bbsrc.ac.uk/news/health/2012/120126-pr-how-to-make-better-vaccines.aspx

Bacille Calmette Guerin (BCG) is the most common vaccine administered to combat tuberculosis disease in the world. (1) The vaccine contains a weakened live strain of Mycobacterium bovis, which is present in cows and shares a common ancestor with the human tubercule bacillus Mycobacterium tuberculosis (2). Similar to other vaccines, BCG triggers the formation of antibodies from the harmless strain of Myobacterium bovis to help prevent tuberculosis (Figure 1)(1). The efficacy of BCG vaccine varies from 0-80% depending on age, the type of BCG vaccine, and the population (1). Although BCG remains as the primary vaccine against tuberculosis, it has only produced variable amounts of success. Many factors, including recent findings that distinct BCG strains have very different biochemical characteristics due to mutations, have further complicated the issue (1). Researchers are currently searching for a more effective way to treat tuberculosis disease, but none have been found to date (1).

The origin of the Bacile Calmette Guerin virus began when Albert Calmette and Camille Guerin started working on Mycobacterium bovis in 1908. After the strain was attenuated 230 times over thirteen years, BCG was used as a vaccine to treat tuberculosis (1). The strain went through many unknown genetic changes as it became less virulent in animals. After the original success of the vaccine, it was distributed all around the world. However, as the vaccine underwent distribution, the newly distributed strains underwent distinct genetic changes (1). BCG strains continued to change as individual countries altered the strain to fit their own needs (3). Currently, there are seven strains that are administered throughout the world, but they differ in gene sequences and protein production (3). 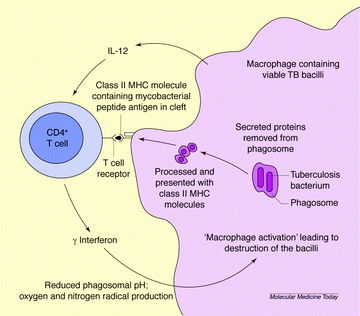 BCG, like most vaccines, stimulates antibodies and creates a resistance without damaging the organism. The BCG vaccine recruits CD4 and CD8 T cells as a response to protective mycobacterial antigens (Figure 2) (5). After recruiting these cells, the new cells are exposed to the macrophage product interleukin 12 which calls for T cells to secrete interferon y (6). When Mycobacterium tuberculosis enters the cell, interferon y reduces the pH in the phagosomal membrane and produces superoxide and nitric oxide, which can destroy Mycobacterium tuberculosis (6).

Structural and Functional Differences of Mycobacterium tuberculosis and BCG 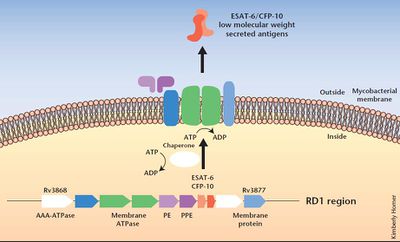 The Mycobacterium bovis strain of the BCG vaccine is similar to Mycobacterium tuberculosis, but there are some structural and functional differences between the two strains. Recent genetic sequencing has shown that the BCG vaccine and Mycobacterium tuberculosis have three distinct genomic regions (2). The first genomic difference, named RD 3, is a 9.3-kb genomic segment that is absent in BCG compared to virulent Mycobacterium bovis and Mycobacterium tuberculosis (2). However, researchers concluded that the absence of RD3 occurred during the derivation of BCG and that RD3 did not make Mycobacterium tuberculosis virulent. A similar conclusion was made for the genomic segment RD2, which also disappeared from the BCG strain after it had already been used as a vaccine. However, researchers discovered through two-dimensional gel electrophoresis that RD1 (Figure 3), a 9.5-kb DNA segment absent in BCG, could have significant implications as to why BCG is not virulent for humans. RD1 was found to repress at least ten proteins involved the in the regulation of multiple genetic loci which suggests that it is likely that a regulatory mutation is responsible for the lack of virulence in BCG (2).

Some researchers now hypothesize that the absence of RD1 calls for BCG-derived antigens to the vacuolar pathway to antigen presentation (5). Additionally, another study injected mice with a mutated Mycobacterium bovis and Mycobacterium tuberculosis strain that did not contain RD1 and found more ways in which the presence of BCG differentiates itself from Mycobacterium tuberculosis. The mutant mice could not cause cytolysis of pneumocytes compared to their infected counterparts (7). They found that RD1 codes for the protein ESAT 6, which mediates cytolysis of the infected cell and tissue invasiveness (7). Since BCG lacks RD1, cytolysis does not occur and the organism can remain unharmed.

Although BCG vaccinations have helped millions of people, the effectiveness of the vaccine greatly varies. One major reason for BCG’s varying efficacy is due to the vast amount of different BCG strains. When BCG was first distributed around the world in 1924, several different distinct daughter strains developed because BCG is a live vaccine (1). As early as the 1950s, scientists realized BCG substrains contained unique biochemical and immunological phenotypes. Researchers have now discovered that different strains vary in the amount of protein antigens which affect the immunogenicity of current BCG strains (1). One example of the vast differences in BCG strains can be seen through examination of phthiocerol dimycocerosates (PDIMs) and phenolic glycolipids (PGLs). Both molecules play an important role in modulation of the immune response, and dysfunctional PDIMs and PGLs can lead to increased attenuated virulence (1). Many of the strains contain variations of PDIMs and PGLs due to mutations; therefore, different BCG strains have varied effectiveness because of their unique biochemical characteristics.

Researchers are currently looking for ways to improve the efficacy of the BCG vaccine as well as looking at alternative methods for a vaccine against tuberculosis. One method used by researchers involves increasing the expression of immunodominant genes and adding deleted genes back to BCG since it is hypothesized that BCG has lost effectiveness over time because of gene loss (8). Another approach under testing involves strengthening the body’s immune response by maximizing the antigen export from BCG (8). Researchers are currently testing a vaccine strain that is unable to arrest phagosome maturation and expresses genes thought to weaken the phagosome membrane (8). If the membrane is weakened, than CD8 T cells might have more access to bacterial-derived antigens from cytosolic scavenger pathways (8). These are only two of many strategies currently being tested by researchers in an effort to combat Mycobacterium tuberculosis. Researchers have been and continue to extensively search for a better vaccine to fight Mycobacterium tuberculosis, but as of today, BCG, even with its varied effectiveness, remains the safest and most widely used option.