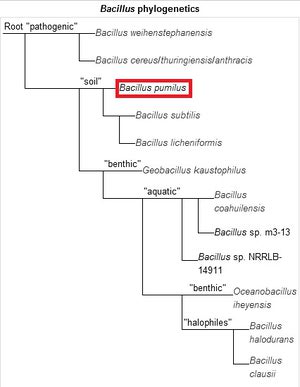 Bacillus pumilus is a spore-forming bacteria that is rod-shaped, Gram-positive, and aerobic. It resides in soils and some colonize in the root area of some plants where B. pumilus has antibacterial and antifungal activity.[1] Some purposes of B. pumilus that are being researched are its involvement in bacterial hay preservation, and the use of B. pumilus plasmids in gene transfer systems.[2] The proteases from B. pumilus are used in various industries. Food, chemical, detergent, and leather industries can benefit from the proteases from B. pumilus.[3] The use of the plasmids from B. pumilus and insertion of other plasmids to the bacteria aide in various industries, and as antimicrobials and antifungals.

B. pumilus has one circular chromosome and have a varying length from 3.7 to 3.8 Mbp. Strains SAFR-031 and ATCC 7061 are 3,704,465 and 3,833,998 base pairs respectively. About 41% of the DNA base pairs are GC. The circular chromosome contains around 4000 genes and 3600-3900 proteins.[4] Rolling-circle replication is the method used by most B. pumilus plasmids.[5] Assimilation of plasmids is useful because of the potential to be used in gene transfer systems. When taking up a plasmid, it was found that the assimilation process is similar to conjugation.[3]

The cellular features of B. pumilus are synonymous with other species of the genus Bacillus including B. subtilis, B. megaterium, and B. cereus. It is a Gram-positive, rod-shaped, spore-forming bacteria found in soil, water, and a variety of other habitats. Like most Gram-positive bacteria, teichoic and lipoteichoic acids cover the outermost layer of the peptidoglycan cross-links. They play a role in adhesion to host cells and other surfaces found in the environment, as well as being major surface antigens. These acids are composed of polyglycosyl phosphates (i.e., glycerol-P or ribitol-P) with mono and disaccharides in the repeating units [14]. The phosphates within the teichoic acid chains give the cell surface an overall negative charge, allowing for efficient uptake of various cations such as Ca2+ and Mg2+ into the cell. Its ability to differentiate into an endospore makes B. pumilus highly resistant to oligotrophic environments, H2O2, chemical disinfection, and other harsh conditions [13].

Like the cell constituents, the B. pumilus life cycle is similar to that of other Bacilli. It assumes any of three life stages: sporangium, vegetative cell, or free spore. When conditions are not favorable for growth, B. pumilus will undergo sporulation and release a spore into the environment. The stage of sporangia is between the vegetative state and a free spore in which an immature spore is nested within the cell that can undergo further sporulation if the conditions are suitable. In the formation of a vegetative cell from a free spore, the spore will typically undergo germination when the conditions most favor it. An important component to the germination and resuming a appropriate growth rate is timing germination with a non-transient temperature change or nutrient flux.

Several biochemical assays found in the analytical profile index (API) have been used in pursuit of its classification. B. pumilus is amylase, lipase, and protease-positive. It has a variety of mechanisms of nitrate reduction, gas production from glucose, and acid production from a variety of carbon sources, namely arabinose, mannitol, xylose, glucose, and lactose. Notably, B. pumilus can generate acetylbutanediol (ABD) from acetoin, as seen by a positive result for the Voges-Proskauer test [15]. ABD is part of a class of diols that are important in the microbially-driven synthesis of various polymers and also potentially used as an alternative to standard fossil fuel feedstock. 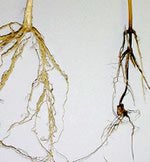 Bacillus pumilus participates in a wide range of symbiotic relationships. B. pumilus can function as a plant growth promoting rhizobacteria within the rhizosphere of agriculturally significant plants such as red peppers (Capsicum annuum L.) and wheat (Triticum aestivum)[6,7]. In wheat, B. pumilus also induces plant resistance to Take-all (Gaeumannomyces graminis), a fungal disease which can significantly damage wheat crops [7]. Additionally, B. pumilus is thought to function as a plant growth promoting endophyte in Vitis vinifera grape plants [8]. Penaeus monodon, black tiger shrimp, can host Bacillus pumilus in the gut, where it inhibits infections by Vibrio harveyi, V. alginolyticus, and V. parahaemolyticus, all of which are known to be significant bacterial pathogens of shrimp [9].

B. pumilus is significant to ecosystem biochemistry because it functions as a nitrogen fixing bacteria capable of metabolically transforming molecular nitrogen (N2) into ammonia (NH3) [10].

Human infection by Bacillus pumilus is rare, however in 2006 B. pumilus in rice was found to be responsible for 3 cases of food poisoning. The isolated strain produced a complex of lipopeptides called pumilacidins, known to have toxic effects on epithelial cells. The symptoms that resulted from infection included dizziness, headache, chills, back pain, stomach cramps, and diarrhea[11]. Furthermore, in 2007 a report summarizing 3 case studies was published concluding that a strain of Bacillus pumilus was responsible for the development of cutaneous lesions morphologically similar to those caused by Bacillus anthracis [12].