Public telephones as well as cell phones can act as a reservoir of a wide variety of bacterial species, many of which have the potential to be pathogenic [1]. Mobile devices used in hospitals are of particular interest, as they have been implicated in the spread of nosocomial infections [2]. Microbial contamination is most commonly found on the mouthpiece, although the earpiece and the handles of public telephones can also harbour bacterial species. While indirect contamination from person to person has decreased with the decline in the use of public payphones, cell phones with buttons and keyboards and other personal mobile phones in general has been found to be even more conducive to bacterial contamination [3].

The majority of bacterial species that have been found on phone surfaces are those that are part of the normal flora of the skin and body, due to the constant contact with the hands and face. The normal flora of the skin includes up to 1012 bacterial cells, the most common species being Staphylococcus epidermidis and Corynebacteria [4]. In addition, bacteria found in the mouth and the upper respiratory tract can also spread through aerosols and droplets that are released while breathing or talking into the mouthpiece [7]. Many species are resistant to desiccation and can persist on phone surfaces for weeks, with gram-negative bacteria usually persisting longer than their gram-positive counterparts [8]. Despite this, actual colonization and growth of bacteria is rare due to the general lack of nutrients and moisture on the plastic and glass surfaces of phones. 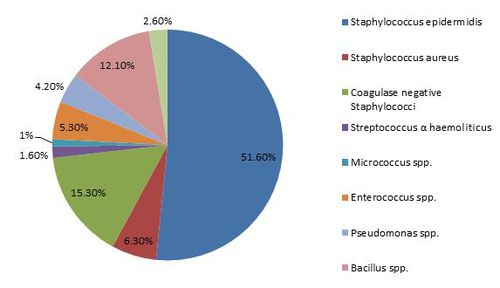 Chart depicting the various bacteria found on phone surfaces based on the study by Nikolic et. al 2011 [2]

Staphylococcus epidermidis is the most commonly found species on phone surfaces [2]. S. epidermidis is a gram-positive cocci, and is a commensal that makes up a large part of the normal human skin flora. Despite this, S. epidermidis has the potential to be a pathogen, especially in hospital patients with compromised immune systems [14]. While S. epidermidis has not shown the ability to colonize and grow on phones, electronic devices can act as vectors that transmit the bacteria through contact. This poses a problem as S. epidermidis can be transmitted onto other plastic surfaces, including those that are inserted into the body such as catheters and prosthetic implants. When inside the body, these surfaces provide an accommodating environment for S. epidermidis to persist and even grow into biofilms [15]. The contamination rate of S. epidermidis on phones is constant throughout the year, with little to no seasonal variation [5].

Acinetobacter baumannii is a ubiquitous bacterium that can be found in the normal skin flora, as well as in soil and bodies of water, amongst others [13]. It is a gram-negative coccobacilli, which are characterized by their truncated rod shape. Strains of A. baumannii resistant to multiple antibiotics have been arisen, which combined with its ability to persist in hospital environments for extended periods of time, has led to its emergence as a potentially dangerous nosocomial pathogen [13]. A. baumannii has been reported to contaminate cell phones, hospital phones, as well as other electronic devices such as keyboards [9]. Some strains have also shown to be extremely resistant to desiccation, surviving for several months with little to no reduction in the number of colonies [20]. 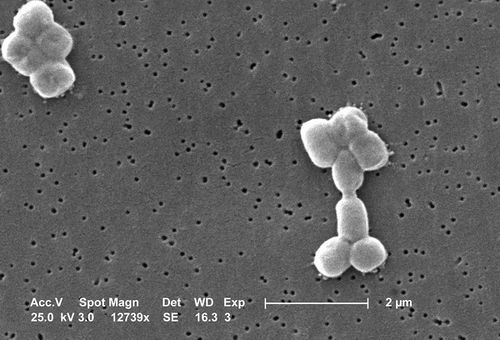 SEM image of Acinetobacter baumannii. Image courtesy of Janice Carr under the CDC.

Staphylococcus aureus is one of the most common causes of nosocomial infections [2]. S. aureus is a gram-positive cocci and is normally found on the skin, as well the respiratory tract of humans [21]. S. aureus can cause a host of various illnesses, from minor skin infections to much more serious diseases which include pneumonia and bacteremia. Methicillin-resistant Staphylococcus aureus (MRSA) is of particular importance in the medical community, as it has evolved resistance to beta-lactam antibiotics [16]. However, their occurrence on phone surfaces has been shown to be relatively rare compared to susceptible strains, with a higher rate of occurrence amongst phones in the hospital than on personal mobile phones [16].

The rise of the use of mobile phones has surprisingly important implications in the microbiology and medical communities, most notably in the area of nosocomial infections. While some hospitals have banned them for this reason, mobile phone use is still relatively commonplace, even in operating rooms [16]. Mobile phones, as well as other more documented items such as surgical equipment, stethoscopes, and clothing can act as a reservoir for bacterial growth or contamination. These items can then act as potential vectors, transferring bacteria onto susceptible patients through indirect-contact transmission. However, while many of these items are subjected to very high hygienic standards, standard cleaning procedures or even guidelines for the use of mobile phones in hospitals have yet to be established [17]. Studies[10][17][18] have shown a correlation between isolated bacterium found on health care workers’ hands and their respective mobile devices, demonstrating the cross-contamination potential of mobile phones in the hospital environment. Furthermore, there is also the risk of further transmitting nosocomial pathogens outside of the hospital if health care workers use the same cell phone for personal use.

Many studies[2][17][18] have reported that the majority of people, including health care workers, do not clean their mobile device. This poses a potential risk factor, as many doctors and nurses not only carry their mobile devices with them, but some have also reported using them while observing patients [19]. The most widely used disinfecting agent for bacterial contamination of cell phones in these studies is 70% isopropyl alcohol, which works by damaging the bacterial cell membrane and denaturing proteins found in the cytosol [11]. However, recommendations for proper cleaning have not yet been established as many phone manufacturers recommend against using alcohol to clean their phones.

(12) Yusha’u M. Isolation of bacteria and fungi from personal and public mobile cellphones. International Journal of Biomedical and Health Sciences. 2010;6;98-102.

(16) Holmes JW, Williams MD. Methicillin-resistant staphylococcus aureus screening and eradication in the surgical intensive care unit: Is it worth it? Am J Surg. 2010;200:827-831.

(19) 4. Goldblatt JG, Krief I, Klonsky T, et al. Use of cellular telephones and transmission of pathogens by medical staff in New York and Israel. Infection Control and Hospital Epidemiology. 2007;28:500-503.