Endospores are dormant, non-reproductive and enzymatically inert forms of bacterial vegetative cells [1]. Endospore-producing bacteria are more conventionally termed “sporulating bacteria”. Sporulating bacteria are derived from the [1] Firmicute phylum and mainly consist of [2] Gram positive bacteria [7]. These endospore-forming bacteria belong to the [3] Bacillus and Clostridium genus [2]. An endospore is a reduced form of a bacterium. It is comprised of a core containing only the bare essentials necessary for the initiation of bacterial growth. The core is surrounded by a tough and highly impermeable coating that is made up of several layers. Endospores serve to protect the bacterium from harmful environmental conditions by reducing it into a desiccated, cryptobiotic and highly defensive state which conveys resistance to many environmental conditions that would otherwise harm and kill the vegetative form of the bacterium. These environmental conditions include extreme temperatures, radiation, extreme pH levels, extreme pressures and harmful chemical agents [1]. The metabolic dormancy and protective capability of endospores were demonstrated by the successful isolation and revival of Bacillus sp. endospores from 25- to 40-million-year-old amber [1]. Thus, sporulation has proven itself to be a vital mechanism of bacterial survival.

The Life Cycle of Sporulating Bacteria 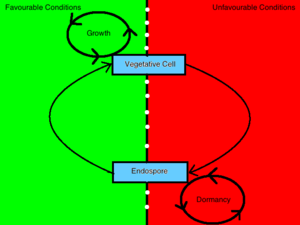 Sporulating bacteria can take on two distinct morphologies, one being an endospore and the other being a vegetative cell. The decision to conform to either morphology is determined by environmental stimuli which convey information to the inside of the cell through a process mediated by a [4] phosphorelay signal transduction system [3]. Bacterial cells will sporulate in response to debilitating growth conditions [6]. In contrast, a bacterium will vegetate in the presence of germinants, nutrients and other favorable environmental conditions [9]. When a bacterium senses an unfavorable change in environmental conditions such that growth is no longer attainable, it will transmit this information to the inside of the cell through the interaction of a sensor kinase and a regulatory protein and induce the up-regulation of sporulating gene products [3]. This cell, in turn, undergoes a transformation that will render it resistant to those environmental conditions and enables it to remain unaffected in a dormant state until favorable conditions are restored. 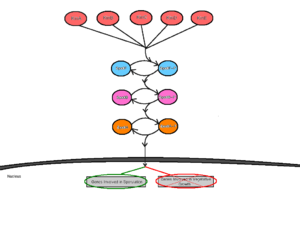 Initiation of sporulation is mediated by at least five sensor kinases that feed into the sporulation phosphorelay signal transduction cascade [3]. These sensor kinases are termed KinA, KinB, KinC, KinD and KinE, and are each specific to different environmental stimuli [3]. Having several sensor kinases allows for multiple environmental signals to influence the initiation of sporulation [4]. In response to the specific interaction with unfavorable environmental stimuli, the sensor kinases would [5] autophosphorylate a conserved histidine residue by an ATP-dependent reaction [3]. The different sensor kinases feed their respective signals into the phosphorelay pathway through a single protein called Spo0F [4]. From here, Spo0F~P transfers the phosphate group to Spo0B and finally, Spo0B~P phosphorylates Spo0A [8]. Spo0B acts as a mediator between Spo0F and Spo0A by delivering the signals from the point of entry into the cell to the point of regulation. Spo0A acts as a DNA-binding regulatory protein by positively regulating genes necessary for sporulation and negatively regulating genes involved in vegetative growth [7]. 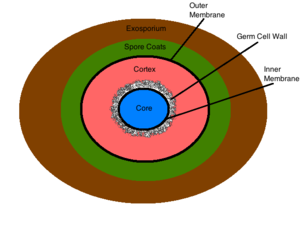 The exosporium is the outermost structure of the spore, comprised mainly of proteins, lipids and carbohydrates [2]. This composition gives the exosporium its inherent hydrophobic characteristic that make it insoluble and contributes to the pathogenicity of spores [2]. This structure is not present in all sporulating bacteria [2]. The spore coat lies under the exosporium (if present) and is made of thin protein layers that are composed of coat proteins that are heavily cross linked via disulfide bonds [2]. This structure serves as the initial permeability barrier, sieving out the larger molecules and allowing the permeation of smaller molecules such as germinants [2]. The outer membrane resides under the spore coat and its function is not yet known [2]. The cortex lies below the outer membrane and is a peptidoglycan structure which differs from vegetative peptidoglycan by its lack of teichoic acids and low levels of cross linking [2]. The germ cell wall lies below the cortex and is also composed of peptidoglycan [2]. Structural differences in the germ cell wall and the cortex permit the selective degradation of the cortex upon germination and facilitate the transformation of the germ cell wall into the bacterial cell wall of a vegetative cell [2]. Below the germ cell wall is the inner membrane. This structure is similar in composition to the cytoplasmic membrane of a vegetative cell, but differs greatly in its fluidity and permeability. The decreased mobility of the membrane lipids renders the structure highly impermeable to all molecules including water, thus preventing the diffusion of most molecules into the core [2]. The inner membrane contains surface germinant receptors which bind germinants and initiate germination and vegetative growth [9]. The core contains the bacterial DNA, RNA, ribosomes, and most essential enzymes [2]. Its dehydrated state contributes to the enzymatic dormancy and heat resistance of the spore [10] [11]. Inside the core the bacterial DNA is bound to small acid-soluble spore proteins (SASPs) that physically shield the DNA from harmful chemicals and enzymes [10]. The conditions within the spore’s core contribute largely to its resistance to unfavorable environmental conditions, and are discussed in detail below.

Many harmful chemicals kill bacteria via DNA-damaging mechanisms [10]. However, spores have evolved a number of mechanisms that confer chemical resistance. The spore coat is important in the resistance to many oxidizing chemicals such as chlorine dioxide, hypochlorite, ozone and peroxynitrite [2] [10] [11]. It functions by reacting with these chemical agents and detoxifying them before they pass through the spore coat [10]. In addition, the inner membrane’s extremely low permeability prevents both hydrophobic and hydrophilic molecules from entering into the core [11]. SASPs also protect the DNA by binding to it and shielding it from harmful chemical agents that enter the core [11].

UV radiation damages the DNA of a cell and induces mutations. Saturation of an endospore’s DNA with SASPs protects the DNA from this harmful threat [10] [11].