Bacteriophages in Cancer Biology and Treatment

Bacteriophages in Cancer Biology and Treatment


Cancer is the second leading cause of death in the United States. And despite extensive research, billions of dollars in funding, and expert scientists devoting their lives to the search for better therapies, cancer has a way of coming back and claiming lives.More and more studies describe the solid tumor as an extremely difficult cancer to eradicate. There are multiple studies that cite the solid tumor's microenvironment as extremely difficult to infiltrate. Tumors are capable of recruiting the body's own immune cells in order to aid its growth. Bacteriophages are now being considered for cancer therapy due to their incredibly small size, and ability to carry drugs into the tumor microenvironment. Studies have also shown that they are capable of "waking up" the immune system in order to detect tumor cells. This is a new branch of cancer biology and treatment, and has the ability to change the traditional medical treatments of cancer.

The Use of Bacteriophages for Drug Delivery 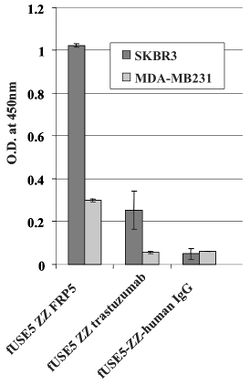 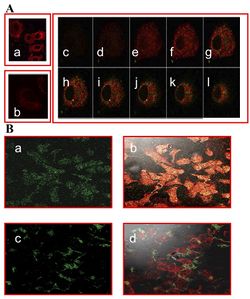 Figure 2: A. Immunofluorescence Staining: (a) control fUSE5-ZZ-human IgG phages (b), no phage, only antibodies (c-l) serial cuts of A431 cells that were treated with fUSE5-ZZ-chFRP5 phages. Membranes were labelled by using red fluorescent CM-Dil cell tracker (MoBiTec, Göttingen, Germany). Phages were detected by monoclonal mouse anti-M13 followed by incubation with FITC conjugated goat anti-mouse IgG (green fluorescence). B. Evaluation of internalization of FITC labelled, drug conjugated phages into SKBR3 cells using confocal microscopy. a and b fUSE5-ZZ-chFRP5 phages, c and d control fUSE5-ZZ complexed with normal human IgG. As a reference, actin filaments with the cells were labelled by using red fluorescent dye Phalloidin (Sigma, Israel). Phages were labelled directly by FITC. Phages were added to the cells for 2 hr before analysis by confocal microscopy. Panels a and c show the green fluorescence of Fluorescein while in panels b and d the green fluorescence is overlaid on the red fluorescence[1].

Chemotherapy drugs, while shown to have anti-tumor effects, tend to result in severe toxicity and widespread distribution throughout the body: notably damaging healthy and malignant cells.[2]New research has started to focus on using bacteriophages as an individualized drug-carrying anti-cancer therapy. The therapy would be targeted, based on genetically-modifying and chemically manipulating filamentous bacteriophages. In Bar et al. 2008, the phages were modified to display a host-specificity-conferring ligand, and carry a cytotoxic drug by chemical conjugation[1]

Antibodies anti ErbB2 and anti ERGR were used to direct bacteriophages to cancer cells. ErbB2 is a a well known protein that is found to be over expressed in approximately 20% of invasive breast cancers. ERGR is a receptor protein that is found on the surface of cells that causes some cells to duplicate if an epidermal growth factor binds to it. They both belong to the epidermal growth factor receptor (EGFR) family (19). They are both common proteins that tend to be associated with the growth of cancers. The cell lines used in Bar et al. 2008 were SKBR3 and MDA-MB23 (human breast carcinoma cell lines), A431 (human epidermoid carcinoma), and HEK293 (human kidney). Phages were engineered to be linked to respective antibodies[1].

A whole cell ELISA was performed in order to assess the binding of phage-attached antibodies (see figure 1.) MDA-MB231 cells express a low level of ErbB2 proteins, while SKBR3 express a much higher level of ErbB2 proteins. As shown, one can see that the antibody-complexed phages showed cell-specific binding. The engineered fUSE5-ZZ-chFRP5 phage had higher rates of binding to receptors on SKBR3 and even MDA-MB231 than the control phage fUSE5-ZZ-human IgG. This shows that the engineered phages are capable of attaching to their respective receptors through the use of antibodies[1].

In order to check if phages could effectively deliver drugs, researchers had to verify that they could enter into host cells. One way this was done was by visualizing phage internalization using confocal microscopy and immunofluorescence staining (See Figure 2). Bar et al. 2008 engineered its phages to carry hygromycin inside cancer cells.[1] Hygromycin is an antibiotic produced by the bacterium Streptomyces hygroscopicus. It kills bacteria, fungi, and interestingly inhibits the growth of some eukaryotic cells.[3] Therefore, by engineering phages to carry the this drug into cancer cells, it is possible further growth can be stopped. The assay was done at 2, 12, and 24 hours in order to track the rate at which phages entered malignant cells. Surprisingly, internalization of hygromycin was the greatest at 2 hours, and diminished over time. Figure 2, images "c" and "d" show the attempt of internalization of hygromycin conjugated phages complexed with with human IgG. They were unsuccessful, filling their role as controls. Therefore, data supports that engineered antibody carrying phages are capable of transporting large amounts of shipments of a drug into a compromised cell[1].

Activating the Innate Immune System and Changing the Tumor Microenvironment 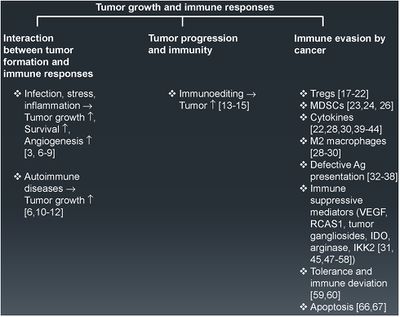 Fig. 1 Tumor growth and immune response. An overview of the different key factors governing tumor formation, progression, and immune evasion. The numbers in parentheses represent the relevant references in support of the statements made.[4]

Tumors have become increasingly more clever in their ways of evading the immune system.

In both animal and human models, tumors have been discovered to actively suppress and manipulate immune responses. Usually our immune system's CD8+ cytotoxic T cells (CTL) and CD4 + helper T (Th)1 cells are capable of warding off cancer development by producing interferons (IFN) and cytotoxins (SCB).[5] Cytotoxic T cells are a type of white blood cell that kill cancer cells, or cells that are dysfunctional.[6] Interferons are signaling proteins released by infected host cells that alert nearby cells to strengthen up their defenses.[7]. The continual production of these type of cells, however, leads to chronic inflammation, which has been tied to the spread of cancer. Inflammatory responses occur when damaged cells release chemicals that alert the immune system that something is wrong. White blood cells will flood to the scene, and start the process of creating new cells by dividing existing ones in order to help with rebuilding the damaged tissue. The continual division of cells, leads to a higher likelihood of DNA damage, and subsequently cancer. [8]

Tumors are particularly clever in their methods of immune evasion. There are many protein factors released by tumor cells that may recruit tumor-associated macrophages (TAMs)[5]. TAMs are a class of immune cells that are primarily found in high numbers in and around the tumor microenvironment. They are responsible for suppressing T-cell mediated anti-tumor immune responses, and are M2-polarized.[9]. M2- polarized macrophages function to repair damaged tissues, and aid the final phase of inflammation repair.[10] The recruitment of TAMS has been found to suppress tumor-specific T cell activation and proliferation. By flooding the the tumor area with TAMS, the tumor is able to trick the body into thinking that repair is needed due to the inflammatory response, instead of actively seeking out the destruction of the cancer cells. Presence of TAMS in and around a tumor microenvironment is correlated with a poor prognosis for those suffering from melanoma or breast cancer specifically. [5] Figure 1. shows more examples of the relationship between tumor growth and the immune system.

Therefore, evidence shows that if our immune system's initial response fails to eradicate tumor cells, the flood of immunoregulatory cells leads to the resurgence of a "smarter" cancer. 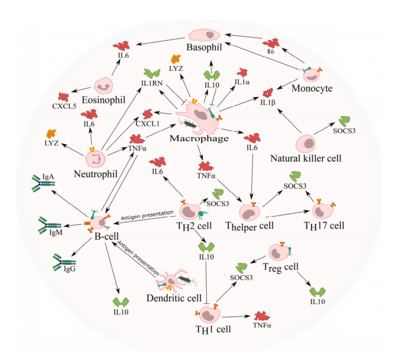 Recently, bacteriophages have been show to be capable of modifying the tumor environment. Phage coat proteins, and phage DNA tend to elicit strong responses from the innate immune system, prompting phagocytosis and cytokine release.[5]There have been studies that show cytokine storms can be generated as a response to phage infiltration. [11] Tiwari et al. described the need for a neutrophil-phage cooperation in order for the immune system to get rid of P. aeruginosa infections. Therefore, the presence of neutrophils has been demonstrated to be necessary for the eradication of phages. [12] 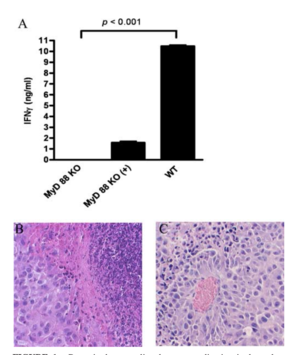 Figure 3. Bacteriophage-mediated tumor eradication is dependent on TLR signaling. A, Wild-type phage preparations, with (+) or without endotoxin, were added to mouse splenocyte cultures from wild type or MyD88 mice. IFN- was detected by ELISA in the supernatants (WT, wild type). B, Tumor rejection area of a tumor 24 h after tumor-specific phage injection (20 lens magnification). A massive infiltration of neutrophils is observed to the right. C, Tumor section 24 h after administration of tumor-specific phage in a MyD88 mouse illustrating the absence of infiltrating neutrophils (20 lens magnification). Representative photographs[5].

Delivering phages into the tumor microenvironment has been demonstrated to initiate infiltration of tumor-associated macrophages. Eriksson et al. 2009 found that the microenvironment of bacteriophage-treated tumors switched from M2-polarized to a more M1-polarized environment post phage treatment. Researchers performed gene expression profiling using a LDA made for finding 30 genes preferentially expressed by antigen-presenting cells and encompassing both M1 and M2 markers. Data analysis found that the tumor-specific phage treatment in wild type mice gave way to an increase of inflammatory cytokines such as TNF-, IL-6, and IL-1B.[5]

In addition, the study discovered that phage-induced tumor eradication is dependent on Toll-Like receptor (TLR) signaling. Mice that were genetically modified to lack TLR signaling pathways (MyD88 KO mice), were administered a tumor-specific phage treatment. 24 h post treatment, the tumors were looked at histologically. The wild type mice (the ones that had TLR pathways intact) were subject to a massive increase in neutrophils in and around the collected issue, and there was necrosis observed as well. Contrastingly, MyD88 mice had significantly less neutrophil infiltration (see Figure 3). This shows that the immune response that phages evoke are largely carried about by TLR signaling pathways, and that the administration of bacteriophages lead to an increase of neutrophilic granulocytes around the site of cancer.[5]

Bacteriophages are capable of altering the immunosuppressive tumor microenvironment, supporting a M1 environment and the promotion of tumor destruction.[5]

Evidence from Gambashidze et al. 2012 has shown that combining E.coli phagelysate and chemotherapy inhibits the rate of cancer growth three fold compared to tumors left untreated. The combined cancer therapy was more potent than chemotherapy and phagelysate administered alone. The study showed that injected doses of phagelysates did not lead to malignant growth, and was accepted in mice.[13]

Studies have shown that the tumor microenvironment is altered once phages are administered.[5] Other cancer treatments have been shown to not be as effective because of the complications that accompany the solid tumor microenvironment. The area itself has little to no circulation, and even is considered hypoxic due to the constant cell growth. This makes it difficult for therapies such as chemotherapy, radiation, and hypothermia magnetic nanoparticle treatment to reach and destroy cells deep within the tumor. [14] This is why the combining of several cancer treatments has gained some interest over the last few years. 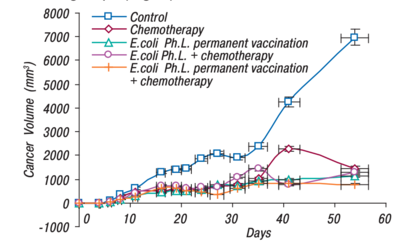 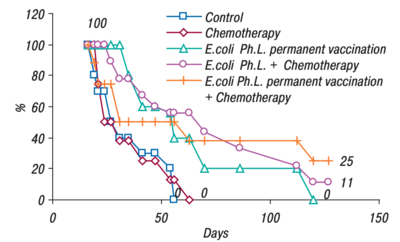 An efficacy study was also performed by Gambashidze's team(see Figure 2). The combined treatment group lived the longest, 25% of mice making it to 130 days. Compared to the control and chemotherapy groups, where all the mice were deceased just after day fifty. All the groups that had phagelysate treatment, lived significantly longer than their counterparts(figure 2).[13]

There are many novel applications of bacteriophage treatment that can be added to the toolbox of an oncologist. While this is a relatively new therapy, it has lots of potential. The use of phages as a drug delivery system has shown promise, as it allows for targeted delivery of chemotherapy drugs. Chemotherapy drugs traditionally lack specificity, and consequently result in widespread damage of healthy cells in addition to cancerous ones. By using a targeted therapy, physicians can avoid long-term immune and cell damage. Bacteriophages have also been shown to manipulate the tumor microenvironment, a task that has proven difficult for many other novel and traditional therapies. By activating the immune system, the phages can alert the body to the tumor. The combination of therapies has shown great effectiveness in mice studies. By changing the tumor microenvironment, other cancer therapies have an advantage towards destroying tumor cells that are wound tightly within the hypoxic area. While there is still much left to be discovered with regard to the effects of phage treatment, these studies provide evidence that this therapy is directed towards success.