Bacteroides fragilis is a gram-negative, non-spore forming, rod-like anaerobic microbe.[1] The bacteria reside in the gut flora of the human microbiota. Bacteroides fragilis remain commensal with the host when in the gut. There, they play an essential role in processing complex molecules into simpler ones in the host intestines. However, if the microbe enters the bloodstream or surrounding tissue it can lead to severe anaerobic infections, most commonly the formation of abscesses.

Anaerobes are the most common bacteria in the human colon. Within the group of anaerobes, Bacteroides make up approximately 25% of the anaerobic bacteria within the gut.[2] The Bacteroides genus consists of: B. fragilis, B. distasonis, B. ovatus, B. thetaiotaomicron, B. vulgatus, B. uniformis, B. eggerthii, B. merdae, B. stercoris, and B. caccae (shown in Figure 2). Of these, B. fragilis is the most frequent isolate and responsible for the majority of anaerobic infections.[1] B. fragilis is most commonly associated with intra-abdominal infections.[3] A number of these species demonstrate resistance to a wide variety of current antibiotics. 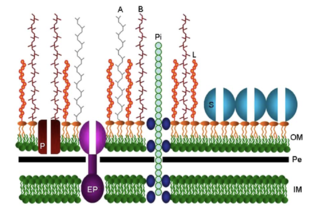 Elements of the cellular structure of B. fragilis contribute to its commensal relationship to the host or its advantages as a pathogen. Like all species of the Bacteroides genus, B. fragilis is a rod-like anaerobe with an inner cell membrane and an outer cell membrane containing lipopolysaccharides with specific side chains.[1] These side chains (polysaccharide A and polysaccharide B) are made up of repeating tetrasaccharide and hexasaccharide units, respectively(shown in Figure 3, labeled A and B). These polysaccharides consist of positively and negatively charged groups that interacted with each other to form a capsule that can be up to several hundred micrometers thick.[4] The polysaccharide complex is responsible for induction of abscess formation when the bacterium escapes the gut. There are also pili and efflux pumps protruding through the outer cell membrane(labeled EP and Pi). The pili are responsible for adherence to surrounding cells and mucus and the efflux pumps play a role in excreting toxins and antibiotics, contributing to the high level antibiotic resistance of B. fragilis.[5] B. fragilis also contain a large variation of proteins and enzymes that it uses to obtain and digest the wide variety of carbohydrates available in the gut. This is ideal for growth within the ever changing environment of the large intestine. This complex array of enzymes benefits the microbiome by breaking down nutrients for the other surrounding gut bacteria that are unable to digest the nutrients themselves. B. fragilis also produces a bile salt hydrolase to protect the anaerobe from the bile salts within in the gut. Without this enzyme, the bile salts would collapse its membrane and damage the cell.[4] B. fragilis also has the ability to adapt its surface architecture to the conditions within the gut or outside the gut. This function allows it to survive the changing and harsh conditions of the gut or evade the host immune system outside the gut. This complex cell surface structure allows for its dual existence as a commensal gut bacteria and, when escaped, a pathogen.

B. fragilis only makes up about 1-2% of the gut micro-flora, yet it is the most predominant and persistent isolate found at the site of anaerobic infection.[4] Infections from B. fragilis commonly arise from a break in the mucosal membrane of the intestine.[6] The travel of B. fragilis outside of the gut can lead to a variety of infections such as local abscesses at the site of the mucosal disruption, metastatic abscesses by spread through the bloodstream to distant organs such as the abdomen, brain, pelvis, or liver, or abscesses formed in the lungs by aspiration of the microbe.[4]

Bacteroides species can be passed from a mother to offspring during childbirth, integrating itself into the human flora.[7] Species of Bacteroides, including B. fragilis, appear in the newborn microbiota about 10 days after birth.[8] Predisposition to B. fragilis infection can arise from surgery, disease, or trauma which can cause perforation of the gastrointestinal tract leading to pathogenesis.[1] The polysaccharide capsule created by the outer membrane of the cell contributes to the induction of abscess formation. When the host recognizes this polysaccharide complex, it triggers the formation of a fibrous wall that encapsulates the anaerobic colony.[4] Because the B. fragilis is anaerobic, it thrives without oxygen. Normally, an aerobic bacterial infection would be suffocated by the fibrous wall due to lack of oxygen; however, the anaerobic B. fragilis continues to grow and expand. The polysaccharide capsule combined with the anaerobic nature of the bacterium contributes to its powerful success as a pathogen.

E. coli, a facultative anaerobe, uses the oxygen at the site which brings the oxygen to a level where anaerobes, such as B. fragilis, can thrive and grow. Due to this phenomenon, many severe anaerobic infections contain a mix of anaerobic and aerobic flora. 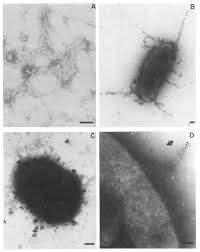 Adherence to Tissues: The fimbriae(multiple pili) (shown in Figure 4 at left) of B. fragilis allows for easy adhesion to epithelial cells and extracellular molecules. B. fragilis can also adhere to peritoneal surfaces due to its unique polysaccharide capsules, a structural function that not many other anaerobes possess. These adhesive properties permit B. fragilis to establish itself within the host tissue and avoid immune targeting and attack.[1]

Protection from Host: The ability of a bacterium to protect itself from the immune response of its host is a large contributing factor to the species' virulence. Due to its polysaccharide capsule, a key promoter in the formation of intraabdominal abscesses, its LPS (Lipopolysaccharide), the main component of the outer membrane of gram-negative bacteria, and a variety of protective enzymes B. fragilis is able to defend itself from the immune response of the host.[1][9]

Destruction of Tissues: Histolytic enzymes of B. fragilis control and induce tissue destruction. The histolytic enzymes attack the extracellular matrix of the host, allowing for the infection to expand into this space.[10] This destruction of the host is one of the main reasons why B. fragilis is considered so virulent and dangerous. As the abscesses form, the B. fragilis also can eliminate surrounding tissue often leading to permanent damage. Abscesses that remain untreated for prolonged periods of time can expand in size and even lead to intestinal obstruction or blood vessel invasion.[1]

B. fragilis has inherent resistance to penicillin due to its production of β-lactamase.[1] Bacteroides are also exposed to many antibiotics over the course of their lifetime as antibiotics first pass through the digestive tract. This constant exposure combined with its inherent resistance to penicillin leads to Bacteroides being one of the most antibiotic resistant microbes among anaerobic bacteria.

Antibiotics such as clinimycin, metronidazole, carbapenem, beta-lactam/beta-lactamase inhibitor combinations (e.g. ampicillin/sulbactam, piperacillin/tazobactam), and cephamycins (cefoxitin, cefotetan, cefmetazole), are some of the only treatments found to eliminate a Bacteroides fragilis infection.[11][12] However, resistance rates to cefoxitin and clindamycin are on the rise.[13] After severe infections, the abscesses commonly need to be drained and the patient should continue treatment with antibiotics. Abscesses in the lungs can usually heal without intravenous treatment.

Preventative measures of B. fragilis infections includes administration of antibiotics prior to abdominal or pelvic surgery.[1]

Bacteroides infection can also be prevented by initial treatment with gentamicin, an antibiotic which targets facultative anaerobes such as E. coli but not Bacteroides. Because Bacteroides fragilis infection depends also on the existence of a facultative anaerobe, this antibiotic can be another preventative measure taken to prevent severe anaerobic infections involving B. fragilis. This method, however, does not stop the later development of Bacteroides abscesses. Therefore a more effective treatment combines both gentamicin with clindamycin, an antibiotic that is effective against Bacteroides, prevents the initial infection and later development of abdominal abscesses.[1]

Research into B. fragilis is especially relevant today as it continues to increasingly become resistant to more and more antibiotics. A large majority of the B. fragilis research is currently being conducted on the the polysaccharide capsule and how this structure contributes to the virulence and abscess formation within the host.[14]

B. fragilis is one of the most significant human anaerobic pathogens. It is the most commonly isolated bacteria from anaerobic infections but also exists commensally within the human intestines. The anaerobe only presents danger when it escapes the gastrointestinal tract due to a rupture. After escaping, the anaerobic infection can be very severe due to the high virulence and pathogenicity of B. fragilis. The pathogen can produce large abscesses outside the intestinal tract or even travel through the blood to infect a distant organ such as the abdomen, brain, liver, pelvis, or lungs. This specific species of Bacteroides is still being studied today due to its prominence within the body, its increasing antibiotic resistance, its important use in fecal tracing, and its unique structural and physical functions that other species of the Bacteroides genus do not contain. Continued understanding of the B. fragilis species can lead to a deeper understanding of the human microbiota and anaerobic infections.