Barophile is a bacterium which prefers to grow or exclusively grows at moderately high hydrostatic pressures such as the Challenger Deep in the Marianas Trench which has a depth of 10,994 m [1]. It is deeper than the height of the highest mountain in the world, Mt. Everest [1]. The Marianas Trench was formed when two oceanic plates converge with one plate descending into the mantle to form a trough known as an oceanic trench [1]. The normal atmospheric pressure at the surface of earth is 0.1 MPa (1.013 X10 ^5Pa). The bottom of the trench has extremely high hydrostatic pressure, 1000 times greater than 0.1 MPa due to the large column of water sitting above it. Barophilic bacteria are best adapted with growth pressure greater than 40MPa whereas moderately barophilic bacteria grow ideally above 1 atm but less than 40MPa [6]. 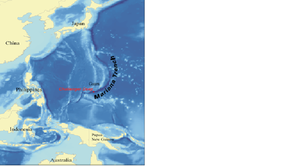 Location of the Marianas Trench

The Challenger Deep is a very cold, highly pressurised environment with hydrothermal vents on the ocean floor which release hydrogen sulfide and other minerals as energy sources for barophilic bacteria [2]. The vents provide energy for growth to microorganisms for chemosynthesis as microorganisms are unable to perform photosynthesis due to lack of sunlight in deep ocean [2]. Temperatures can reach 300 degrees Celsius near vents. The venting fluid is highly acidic but surrounding water is basic [2]. The ocean floor consists of pelagic sediment which is viscous as it contains shells, animal skeletons, decaying plants and microorganisms [2]. Despite the harsh environment, microbial flora composed of wide range of taxa such as actinomycetes, fungi, non-extremophilic bacteria and various extremophilicbacteria has been discovered in the mud of Mariana Trench [12].

Phylogenetic analysis of psychrophilic and barophilic deep-sea bacteria from various geographical locations repeatedly place them under one of the 5 Proteobacteria gamma genera: Shewanella, Photobacterium, Colwellia, Moritella and CNPT3 group [4]. An unmanned submersible named Kaiko entered the world’s deepest bottom depth and recovered sediment sample [7]. DNA was extracted from the sample, sequenced and analysed. Three kinds of bacteria groups were discovered which belonged to the Proteobacteria gamma subgroup. The first two kinds were closely related to Pseudomonas [7]. The discovery of Pseudomonas confirms a different, earlier investigation whereby Pseudomonas bathycetes was the first bacterium isolated from the sediment at Marianas Trench. The other bacterium belonged to the genus Shewanella [7]. 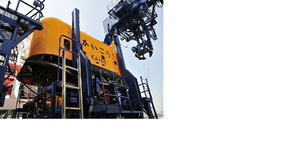 Actinobacteria were selectively isolated from sediment by inoculating in selective media: the isolates can be allocated to the species Dermacoccus, Kocuria, Micromonospora, Streptomyces, Tsukamurella and Williamsia [9]. The actinomycetes successfully cultured in lab consisted of strains that were different from the terrestrial species which had less growth at higher pressures.

Geobacillus comprises mostly of thermophilic bacteria. Geobacillus sp. Strain HTA-462 which is not only thermophilic but also barophilic was found at the bottom of the Challenger Deep [11].

The influence of pressure can regulate the gene expression of bacteria in deep sea ocean. Early studies suggested that barophilic bacteria increase the number of unsaturated fatty acids in cell membrane to keep their cell membrane fluid at high pressure [6]. However, later studies are identifying the presence of cell components in cell membrane [6]. High-pressure- adapted bacteria Shewanella and Photobacterium sp.SS9 were isolated from the deep-sea sediment.

Identification of pressure-regulated genes in Shewanella

In the study of pressure-regulated genes from Shewanella, downstream of promoter of barophilic strain, opening reading frames (ORFs 1 and 2) make up the pressure-regulated operon [6]. Highest transcript levels of these genes were observed at a high pressure of 70 MPa. Similar sequences of ORFs 1 and 2 were also found in other deep-sea bacteria [6]. Downstream of this operon is ORF3 which is also induced by high pressure. ORF3 encodes the CydD protein. CydD is responsible for assembly of cytochrome bd complex which is one of the important components of Electron Transport Chain (ETC) in inner membrane and hence may be important for growth at high pressure [6]. 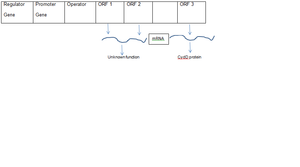 OmpH and OmpL encode porins or outer membrane proteins [6].The ompH and ompL gene expression is inversely regulated by pressure. There is high OmpH expression when Photobacterium is in high optimum pressure whereas high OmpL protein expression at normal atmospheric pressure. OmpH enables greater uptake of nutrients which is important in a low nutrient environment like deep sea [6]. Omp gene expression is regulated by ToxR/S which senses pressure changes and can act as an activator or repressor depending on the pressure [6].

Barophilic bacteria growing in sediment support life by providing source of carbon to benthic animals which ingest bacteria. Barophilic bacteria also support each other growth by recycling nutrients. Some barophilic bacteria decompose organic matter, hence releasing various minerals such as sulfates, phosphates and nitrates which are used by other bacteria with different respiratory processes [13].

Enzymes produced by barophilic bacteria can function at high pressure; hence these enzymes may be useful in high pressure bioreactors, toxic clean-up in deep sea [5] and high-pressure food processors [3]

Recently, a new species within the genus Moritella was isolated from deep-sea sediment at Mariana Trench and given the name Moritella yayanosii [8]. This new species was classified under Moritella as it shared similar composition in the membrane lipids. However, it is different from the reference strains of Moritella as this new species is obligate barophile and utilized different substrates [8].