The benthic zone is the lowest level of a marine or freshwater system and includes the sediment surface, the water just above it, and some sub-surface layers. Benthic zones exist all over the world in every appreciable water system, be it an ocean, lake, pond, river, or stream. The benthic zone starts at the shore and extends down along the bottom of the lake or ocean. This means that it could be as shallow as a few inches at its start, but may reach depths of 6,000 meters as it coincides with the abyssal plain at the bottom of the ocean. Because of the depths it can reach, the benthic zone is often characterized by low sunlight and low temperatures (Alldredge 1988). This usually attributes to little life and biodiversity, so one would be inclined to assume that it is a vast waste. However, the presence of sediment layers at the benthic zone provides many nutrients and adds greatly to species richness. Because the benthic zone has such a range of depths, many kinds of organisms may live there. Crustaceans, sponges, bivalves, snails, sea stars, polychaetes, fish, and many others can inhabit the zone (Konhauser 2007). This page will focus more on deep oceanic benthic zones, but will touch on other zones as well. 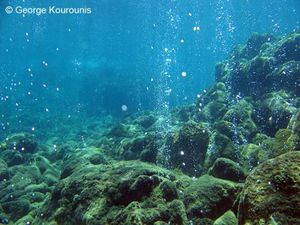 Benthic zone of the sea floor.

Diagram showing the different zones of an ocean. Note the wide range of the benthic zone. Although specific for an ocean, this is how the benthic zone is characterized across all water systems.

Because the benthic zone can occur in such a wide range of environments, physical and chemical characteristics vary largely and are almost always context dependent. Nutrients are not available in the way they are in much higher depths in the water column, so organisms in the benthic zone are nutrient limited.

Temperature in the benthic zone ranges from warmer temperatures at shallow depths because of close proximity to the water surface, but may drop to 2 °C to 3 °C at the most extreme depths of the abyssal zone. At such cold temperatures, abundance of life is quite low and organisms move at a very slow pace. Warmer waters at shallower depths provide much more energy and can host more complex systems (Alldredge 1988).

The nutrients at the sediment layer are usually the limiting source of energy for the organisms that inhabit the benthic zone at great depths. These nutrients actually originate from dead or decaying organic matter from higher up in the water column. This organic matter drifts down continuously from shallower depths and settles on the bottom, where it is consumed and is the main driver of the benthic zone food chain (Gooday et al. 1990). Most areas do not have sufficient heat or sunlight to sustain much life, so organic matter is very important to the chemical environment.

Pressure ranges from very little in a few inches of water to tremendously great at the bottom of the ocean. For an extreme example, the deepest spot in the Mariana Trench (the deepest trench in the ocean) is around 36,000 feet below sea level and experiences pressures that are more than 1000 times greater than standard surface pressure ("Deepsea Challenge").

High pressure in zones of great depth make for a very homogenous environment that produces a number of peculiar traits among organisms. One such peculiarity is the enhanced size of certain organisms. At great depths in arctic and antarctic waters, dissolved oxygen content is quite high. This allows organisms to grow much larger when compared to close relatives in temperate zones (De Broyer and Danis 2005).

In water, light becomes very limited in its significance at depths below about 200 meters. Between 200 and 1000 meters, the intensity of light quickly dissipates. This zone is termed the dysphotic zone and photosynthesis is no longer possible. At 1000 meters, the aphotic zone starts and light availability becomes negligible (NOAA).

At shallower depths, there are many more photosynthetic microbes. At greater depths, microbes do not have access to light and heat and must rely on detritus for energy. The organisms in the benthic zone are classified into those which dwell on the surface and those which burrow into the sea floor. They are the epifauna and infauna, respectively. Organisms inhabiting the benthic zone are collectively called the benthos. The name benthos comes from the Greek noun βένθος, which means “depths of the sea” (Alldredge 1988).

Benthic microorganisms are almost exclusively microalgae and bacteria, but other others include: ciliates, amoebae, and flagellates. In general, most organisms there are detritivores and scavengers because of the abundance of dead or decaying organic matter. In addition to these heterotrophs, there are chemoautotrophs present that use the substrate to make biomass. There are also photoautotrophs present at shallower depths where sunlight is abundant. The impacts of benthic microorganisms spread, much like the impacts of all other microbes, across the community as a whole. They provide essential energy and nutrients at the lower levels of the food chain and are imperative to the success of other forms of life.

Benthic microorganisms are key to controlling nutrient flow between sediment layers and the water column. As nutrients are taken in and stored by microorganisms, their flow through the system is greatly slowed. This process can act as a buffer. Buffers are essential in all natural systems and prevent excessive flux of elements. One such example is seen when microalgae buffer nutrients to prevent phytoplankton overexploitation, which often results in eutrophication ("Benthic Microalgae").

In benthic areas where sunlight does penetrate, microalgae are ubiquitous. When these algae photosynthesize, they take up carbon dioxide and other micronutrients. Much of the carbon taken up is later released as extracellular polymeric substances (EPS or “slime”). EPS is thought to play an important role in the sediment layer, as it contributes both to sediment structure and the local food web. As the name “slime” implies, EPS is a sticky organic material that constitutes biofilms and allows cellular attachment to surfaces ("Benthic Microalgae"). Its stickiness helps keep sediment particles together and prevents resuspension, which keeps dissolved oxygen levels stable. EPS further contributes because it is rapidly metabolized by bacteria and thereafter provides nutrients to the local food web ("Sources of Pollution: Sediment Resuspension").

Some researchers have investigated the impacts of the Deepwater Horizon oil spill on microbial community composition. The spill that started on April 20th, 2010 lasted for 87 days and released 210 million US gallons of oil into the surrounding environment. A research group used taxonomic and parallel marker gene approaches to determine the microbial community composition before and after the spill. As expected, diversity and richness declined greatly. In the sites studied, nematodes dominated naturally, but after the spill, fungi were the overwhelmingly dominant group. The spill caused certain opportunistic and resilient species to take hold of communities. Fungi that could take advantage of high levels of hydrocarbons, specifically those of the genera Apergillus, Acremonium, Acarospora, Rhodocollybia, and Rhizopus, were found at very high abundances post-spill, but were rare pre-spill. Interestingly, fungi of the genus Altenaria demonstrated increase activity of lignocellulose-degrading enzymes. Those enzymes have actually been used for the breakdown of industrial toxins. A complete restructuring of microbial communities like this causes an effect that precipitates into all forms of marine life and will be felt for a considerable amount of time (Bik et al. 2010).

An interesting process relatively new to marine biology centers around the carcasses of whales that have sunken to the ocean floor. This large mass, termed “whale fall”, provides unprecedented amounts of nutrients for organisms in the benthic zone. Many types of micro- and macrofauna will accumulate around whale fall and can feed for months or years at a time. This direct feeding is more temporary, but a long lasting change is produced by the microfauna that feed. When microbes feed on the lipid-rich bones, they excrete hydrogen sulfide and other chemical compounds that restructure the chemical composition of the surrounding water. Oxygen is also depleted because of the high metabolic rates of microbes present. Because of low oxygen concentrations, microbes that perform sulfate reduction and methanogenesis are favored. These biotic and chemical changes can greatly alter microbial and macrofaunal community structure (Danise, et al. 2012).

Because of their reliance on it, microbes may become spatially dependent on detritus in the benthic zone. Columns where marine snow (detritus) consistently falls will be more heavily populated by microbes. Bacteria and protozoa, specifically flagellates and foraminifers, colonize quite rapidly on detritus matter. After colonies are established, larger grazing organisms feed on them. Areas where these processes take place have a markedly higher abundance of life and are more complex systems (Gooday et al. 1990).

Detritus levels vary seasonally as well, which has an effect on the life that they support. Population dynamics, microbial community structure, and even reproductive cycles may be greatly influenced by marine snow when nutrients are a limiting factor. Opportunistic species are often first to colonize these areas and affect the way niches are filled, which has a cascading effect in communities (Gooday et al. 1990). These processes all combine to create great variation and uniqueness in benthic zone habitats.

"Light May Be Detected as Far as 1,000 Meters down in the Ocean, but There Is Rarely Any Significant Light beyond 200 Meters." How Far Does Light Travel in the Ocean? NOAA, n.d. http://oceanservice.noaa.gov/facts/light_travel.html

Edited by Michael Schock, a student of Angela Kent at the University of Illinois at Urbana-Champaign.