Beyond the Basics: Genetic, Intestinal, and Viral Contributors to Autism

Autism spectrum disorder (ASD) is a comprehensive label for a wide range of diagnoses and accompanying manifestations. A diagnosis of ASD typically comes after a comprehensive psychological examination and possibly assessment of other clinical symptoms, such as gastrointestinal distress. Common traits associated with autism include social communication challenges and restrictive and repetitive behaviors. [1] It is important to note that these traits vary widely between individuals. Additionally, most of the current research has been conducted on males; females may exhibit very different manifestations. [2]Currently approximately one in 54 children are diagnosed with autism, with males contributing a substantially larger proportion of this figure. [3]This statistic is also subject to the clinical and diagnostic bias surrounding autism and gender, and the subjectivity of what is classified as autism spectrum disorder.[2]

Autism is a heterogeneous disorder, meaning that there are several factors - which may be dramatically different across ASD individuals - that can lead to a diagnosis.[4] Associated with a heterogeneous disorder is polygenic inheritance, the combined effect of multiple polymorphisms to have a large effect on an individual.[5] Possible variation as to the type and number of polymorphisms that an autistic individual receives from their parents during recombination partially explains the wide spectrum in the presentation of autistic traits. “De novo” mutations occur randomly in germ line cells; resultantly, they produce a phenotype in the offspring that is not present in the parental generation. These de novo mutations are frequently copy number variants, (CPVs) - duplications or deletions - single nucleotide variations, (SNVs) or likely-gene-disrupting (LGD) mutations - causing premature stop codons, frameshifting, or altered splicing sites.[6]Once established in the genome, mutations can be inherited by progeny from sexual reproduction. An accumulation of these mutations over multiple generations may eventually result in a child presenting with ASD disorder. If this is the case, their family members, who have some of the same heritable mutations, will likely have some ASD traits but be on the ‘higher functioning’ end of the spectrum.[6]

Infrequently, one mutation alone is enough to greatly increase the risk of an individual presenting with autistic traits.[4] Two of the most well-known of these mutations are CPVs of the 16p11.2 locus and 22q11.2 loci.[4] Relative to individuals with heterogeneous autism (here referring to those diagnosed with ASD but not possessing either of the aforementioned CPVs, thus the individual's presentation is considered to be due in much greater part to polygenic inheritance), the 16p11.2 deletion and duplication individuals and the 22p11.2 deletion individuals have a differing mean presentation; the 22p11.2 individuals have statistically insignificant differences from the heterogeneous group.[4] Within the two CPV groups themselves, there is a drastic variability in the function of individuals across social, emotional, and intellectual domains, up to 97% within a group with the same single-locus abnormality.[4] 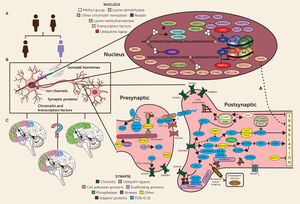 The multifarious biological pathways that are impacted by common mutations in genes and their resulting proteins associated with autism. Although mutations may take place in genes that are expressed in various regions of the body, this image specifically looks at those processes that occur in neural pathways in the brain. This image was created by Manoli and State (2021).[5]

A critical role of the 16p11.2 loci is the regulation of the kynurenine pathway (KP). The kynurenine pathway is a subsect of the metabolic degradation of the amino acid tryptophan.[7] The metabolites produced in this pathway have been linked to multiple neurological and developmental disorders including autism.[8] Quinolinate phosphoribosyltransferase (QPRT) is an essential protein in this metabolic pathway because it catabolizes quinolinic acid (QA), a compound that is cytotoxic at high levels.[9] Increased concentrations of QA are found in ASD patients when compared to control groups.[10] Because QPRT is located on the 16p11.2 gene, a deletion at this loci reduces the QPRT concentration in neurons and glial cells. Consequently QA levels rise, possibly causing or exacerbating ASD symptoms.

22p11.2 is associated with several other conditions including schizophrenia and anxiety, immunodeficiency disorders, and learning disabilities.[11] Coexisting diagnoses and overlapping traits may make it difficult to discern what elements of a patient’s phenotype are due to autism and its relative severity and what parts are a consequence of alternative disorders.

Progress in genetic sequencing may make it possible for this clinical testing for autism to be supplemented with an evaluation of the genome of the patient as well. It is critical to note that this does not mean that genetic testing could confirm or deny an ASD diagnosis. For individuals with ASD that is contributed to through haploinsufficiency, it is not inconceivable that there might be some benefit to targeted gene therapy that would supplement the missing gene product, but right now this idea is merely speculative.[5] 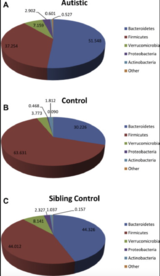 Intestinal microflora in ASD individuals compared to control and siblings. This image was created by Finegold et al. (2010).[12]

Although autism has most commonly been associated with strictly neurological abnormalities, recent research points to the intestine as a significant contributor to the disorder. 23-70% of patients with ASD also present with gastrointestinal (GI) dysfunction, which often manifests as increased intestinal permeability and digestive issues.[13][14] [15] Additionally, relating to GI dysfunction is the gut-brain axis, another likely influential factor in autism. The axis is a relatively new area of research, but already many studies are demonstrating bidirectional communication between the brain and the intestine.[16] Increases in autistic speech, social, and behavioral challenges, as well as aggression and irritability, have been observed to trend with the severity of GI dysfunction, demonstrating the link between GI issues and the gut-brain axis.[17]

Answers to how and why the gut plays a role in ASD may be found within the gut microflora. The intestinal microbiome hosts a signature pattern to the types and amounts of bacteria present; maintaining proper homeostasis of these colonies is crucial for both disease prevention and normal neurological development.[18][19] ASD patients frequently present with dysbiosis in their microflora: a comparison of ASD presenting children and their siblings found a significant increase in Bacteroidetes and decrease in Firmicutes.[12][20] These findings are supported by rodents with abnormal populations of certain gut microbiota having altered emotional and physical development.[16][21] Of note are bacterial orders Clostridia and Bacteroidia, members of the two aforementioned phylums, which show the greatest diversity between ASD and presenting mice and control mice.[15] Microbes in greater quantities in ASD mice were suspected of contributing to pathogenesis, whereas those that were deficient might promote normal activity.[15]

Even today, a sizable population - one study claims approximately 20% of adults in the 38 participating countries - falsely believe that vaccines cause autism.[22] While there are many contributing factors to this belief, three scientific misconceptions form the basis of this myth. The measles-mumps-rubella (MMR) vaccine became antagonized in 1998 when Dr. A. J. Wakefield’s hypothesis about the correlation between the MMR vaccine, gastrointestinal issues, and autism, was prematurely released as fact in media outlets.[23][24] Furthermore, in 1997 the FDA released guidelines to regulate the ingestion of thimerosal, a mercury-containing compound found in many vaccines, and in 1999 mandated its removal from vaccines.[25] Subsequent studies found no negative impact regarding thimerosal in vaccines, but the idea about a possible link between vaccines and autism was already in circulation.[26] A portion of the public only absorbed the news of a potentially dangerous chemical being injected via vaccination. Finally, in 2008 an anecdotal account of a 19-month-old girl who experienced a negative reaction to the MMR vaccine and months later had developmental and neurological abnormalities drew attention when it became a national court case. [24]This incident fueled the belief that an overload of vaccines at one time could cause autism. All of these factors, combined with more modern issues such as political divisions, have led to widespread misconceptions that have continued perpetuating to this day.[27] Despite the plethora of misinformation, over a dozen studies have validated the safety of vaccines and concluded that there is no link between vaccines and autism.[28]

Understanding the pathology of autism is fundamental in establishing the way that it is perceived in society. The rhetoric of negligent parenting raising robotic individuals is an antediluvian manner of thinking that doesn’t take into account the multitude of factors that contribute to autism, including genetics, the gut microbiome, and maternal viral infections. [29] Although it is highly unlikely that a ‘cure’ for autism is in the future, the proliferation of new research means that there is an increasing number of treatment options available, ranging from traditional DBT therapies to more experimental supplements to reestablish proper gut microflora. However, above all else, it is essential to view autism as it is - a complex spectrum encompassing a wide range of individuals, with - instead of a problem that needs to be fixed. All of the positive qualities that ASD individuals have, not just their challenges, deserve acknowledgment. Indeed, some of the most notable names today and in history belong to people who would today likely be classified as autistic: Susan Boyle, Emily Dickenson, Albert Einstein, Bill Gates, Steve Jobs, Thomas Jefferson, Michelangelo, Wolfgang Amadeus Motzart, ad Nikola Tesla.[30] Future research will hopefully unlock more of the intricacies of autism and help autistic individuals be better understood both by society and by themselves.